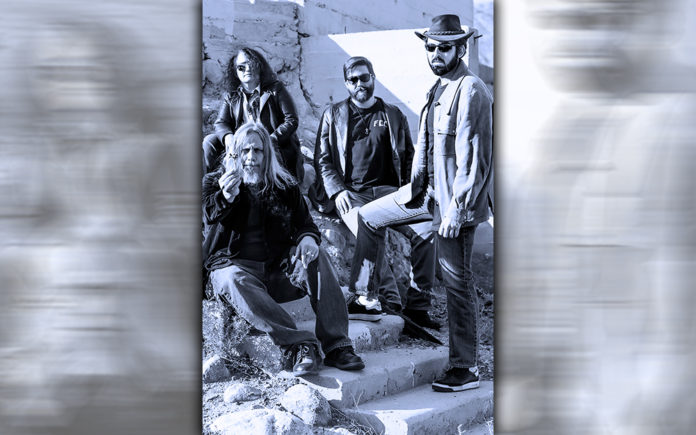 Dali’s Llama has had a busy couple of years. The band recently celebrated their 25th anniversary, and released their latest album, Mercury Sea. They’re getting ready for a brief Southwest tour that begins in September.

Zach and Erica Huskey have always been the nucleus of the band which currently includes Craig Brown on drums and Joe Dillon on guitars and backing vocals. Zach is a Desert Rock originator, who along with Mario Lalli, Herb Lineau and Sean Wheeler, practically invented the local scene. He and Erica became sweethearts at Palm Springs High pulled up stakes and headed for Los Angeles following graduation in the mid ‘80s. Zach was ready to pursue music as a career, while Erica, a talented artist, began her first year of college.

After cycling through a series of L.A. bands, the pair retreated to the desert to start their own, Dali’s Llama. Thanks to Zach’s ardent tutelage, Erica had recently mastered bass guitar. They recruited a drummer and began gigging throughout Southern California.

Their first three albums, Pre-Post Now, Creative Space and Being were recorded in just under two years. Crafty and concise, each harnessed the energy of Punk and added some serious Power Pop crunch. Zach being Zach, naturally Dali’s Llama shifted gears on their next project, The Color Of Apples. Abstract and experimental, it hewed closer to (Jazz giant) Albert Ayler than (Punk progenitor) Iggy Pop. Recorded in 1996, the EP was released five years later.

Dali’s Llama took a brief hiatus when Erica and Zach started a family. Reconvening in 2005, their fourth long-player, Chordata arrived the following year. Although the line-ups have changed over time, the band has released albums at a furious clip, one every couple years.

Eschewing the crisp style of their early albums, their next few efforts exhibited a heaviosity that sometimes mirrored their lives. Between 2007 and 2009, Sweet Sludge, Full-On Dunes and Raw Is Real the music became dense and viscous, down-tuned and sandblasted. Howl Do You Do, released in 2010, offered a tart respite, leaning closer to the Garage Rock and Psychobilly that inspired Zach throughout his sensitive teen years.

The last few years have been a blur, writing and recording Autumn Woods, Dying In The Sun the Blossom EP and Mercury Sea. Celebrating the band’s 20th anniversary in 2013 with a High Desert concert extravaganza they dubbed The Wild Rumpus, and being rightfully acknowledged with a Trailblazer Award from the Coachella Valley Music Awards the following year.

Still, they were happy to accept an invitation to play the 2nd annual benefit, Idyllwild Strong.  Zach, Erica and their sons have had a longtime connection to the town. “We’re playing because that town and mountain mean a lot to us. Erica and I were married at the Zen Center and had our brief honeymoon at Strawberry Creek. During the hot desert days, we head up there to Jeep, camp and relax,” shared Zach.