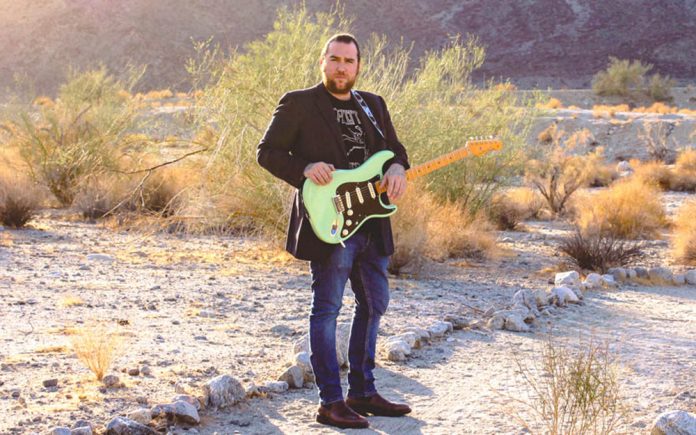 It was only a few weeks ago when I was lucky enough to catch a Delta Fuzz show. I happened to be casually acquainted with both frontman, Jon Giordano and drummer, Craig Brown and had recently met bassist, Jimmy Hegarty but, I had no idea what I was in store for. As soon as they began their set, the space was filled with the sounds of some of the most spot-on and skillfully executed rock and blues covers I have ever experienced on a local level. Simply put, Delta Fuzz is really good you guys. The brainchild of a desert transplant, this band is brand new to the area and they have original music coming out soon. That being said, I was excited to sit down with the guys and discuss their backgrounds and what they have in store for music lovers in the Coachella Valley.

CVW: Craig Brown, (drummer), let’s start with you. I have known you for some years now. Originally I met you as the drummer of everyone’s favorite 80s cover band, Long Duk Dong, but you are a very respected and diverse drummer and you’re not only teaching drums but you are and have been a part of multiple, well respected projects over the years. Are you from the area? 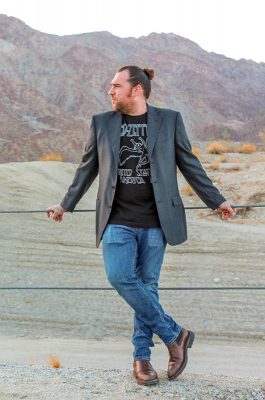 Brown: “I actually moved out here from Northern California back in 2006 in order to attend The Braille Institute in Rancho Mirage. My mom sort of wanted us to be centrally located for several reasons so it just worked out. I attended the Institute and got a lot of help for my eyes and eventually went on Craigslist looking for musicians to play with. That’s where I met Justin Ledesma from Sunday Funeral, (now Allies), and was their original drummer. That was the first project I was a part of out here and I’ve been lucky to connect with so many fantastic musicians ever since.”

CVW: Jimmy, (bassist), at 22 you are the baby of the band. I know you grew up in DHS and have been playing bass for a long time considering your age. You also mentioned that being a musician is basically in your blood. Let’s talk about that.

Hegarty: “My dad has played guitar from around the age of 13. The men on my dad’s side of the family have real musical bones in them. My older brother is a drummer and a guitarist. I started playing bass at the ripe young age of nine.”

CVW: Who’s idea was that?

Hegarty: “Definitely my dad’s idea. There’s a funny story behind that. We had elective classes for middle-school and my dad basically said, ‘You don’t get a choice, you’re doing band.’ The band director at the time had literally taught every one of my siblings up until that point. The age-gap between me and my second youngest brother is about 13 years. So, after the teacher had him, he thought he was done with my dad and his kids until I came along 13 years later and my dad walked me into the office and he stood there looking at me and then my old man and then back at me and then back at my old man and said, ‘Dude. Another one? Really?’”

CVW: After all of that, when did you first start performing live in a band capacity?

Hegarty: “That would have been with Heat Wave which was a jazz and show band. It was a Boys’ and Girls’ Club affiliated group where they get young musicians together between the ages of around 10 to 18. They caught me at the end of my cycle because I was around 17 when I first joined. We played soul, R&B and funk music and a whole lotta jazz standards for the country club crowds. That’s where I got to grow as a musician and that’s where I met some of my best friends to this day.”

CVW: So is Delta Fuzz your first band project as an adult?

Hegarty: “Yeah, it’s pretty much the first thing since Heat Wave that I have been a part of religiously. I have done session work with some other groups but other than that, it’s been Heat Wave and now, Delta Fuzz.”

CVW: Okay, let’s get down to Delta Fuzz. Jon, I know that Delta Fuzz is basically your baby and a continuance of a project you started before you moved here which was relatively recently. Where are you from and how did you become a musician in the first place? 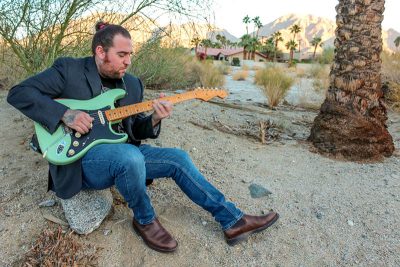 Giordano: “I was born in LA and lived in Lake Arrowhead for a while but I grew up in Redlands before I came here a couple of years ago. I’m basically a Redlands boy. As far as becoming a musician…my folks don’t play. I don’t come from musicians. When I was around six or seven, I saw Elvis on TV one day. It was the 30th anniversary of his death so they were showing a ton of his movies and all kinds of clips. At that moment I was just like, ‘That’s it, I’m going to play guitar.’ I told my parents and they said, ‘Okay, we’ll buy you a guitar as long as you keep going.’ They treated me like an adult in that sense. They were basically saying, ‘As long as you keep up with it, we’ll support you.’ And I’ve been playing ever since.”

CVW: So you started out playing and taking lessons really young. How old were you when you first became a part of a band and started performing?

Giordano: “I was probably around fourteen or fifteen. It was Rockabilly and Surf music. A lot of Dick Dale stuff. I ended up at a buddy’s house and he was watching a DVD of Stevie Ray Vaughn. As I watched it I thought, ‘Wow, this guys’ serious about guitar.’ I had never seen anyone play like that and be so serious with their guitar. So I was like, ‘Well, I’m never going to play Rockabilly and Surf again.’ It was all blues. I was around sixteen at the time. By the time I was seventeen, I was playing the blues.”

CVW: What about singing Jon? You’re also the lead singer of this project and you’re pretty great at it. When did that start?

Giordano: “Oh! Wow, thank you! I’ve only been singing for a few years now. I partially started to sing out of convenience. Plus, I figured that if I wanted to be a serious artist I would need to learn to sing at some point so I approached it the same way I did guitar. I took lessons, practiced and got better.”

CVW: So when you moved to the Coachella Valley a few years back, were you aware of the music scene out here? Had you been schooled on all of the lore of “Desert Rock” and were you intending on trying to become a part of it?

Giordano: “My drummer is huge into Queens of the Stone Age. When I first moved out here, I went to see Queens in San Diego. I knew they were from out here. I hadn’t yet listened to a ton of Kyuss. Kyuss is such a desert scene situation and so, non-mainstream. I think the people of the desert like it that way which I totally agree with and really enjoy. I knew that when I came out here and it was influencing some of the metal I was writing at the time and Queens, Kyuss, etc… that really, desert/stoner rock sound is definitely influencing the newer originals we have been writing. I’m trying to get a single out in the next couple of months and there is no way those guys aren’t influencing what I’m doing.”

Giordano continues: “Let’s put it this way…I feel like if you are from the desert and you aren’t influenced by some sort of desert rock, then it’s almost like you’re lying to yourself. It’s so ingrained in the musical culture here that it’s going to affect you somehow, someway. Whether it’s from the music itself or the people who play it, somehow you are going to be influenced whether you realize it or not. Delta Fuzz is a blues band, don’t get me wrong. We play the greats. But, our originals…I’m definitely pulling from QOTSA, Kyuss, etc.”

CVW: Delta Fuzz has been performing classic blues covers, (extremely well I might add) for the past few months since you started doing shows out here but you mentioned that you are now writing and recording originals.

Giordano: “I started writing originals for this band a couple months ago after a metal project I was a part of died off. I just really felt the need to release something and when you are a blues guitarist, you need to make yourself a part of the world of the blues. That includes doing a lot of covers, even in your own way but also, you have to produce originals. If you want to get online and are posting covers, you are going to have to pay royalties so from a marketing standpoint you gotta have those originals.”

CVW: You guys have a show coming up on November 27th for the 8 years anniversary party at Coachella Valley Brewing Co. Are you guys going to be ready to perform any of those new songs by then?

Giordano: “Yes, for sure we will be performing one that we have nailed so far and we have another one that I have brought to practice that we are learning and I’m still writing lyrics for but we are definitely ready to go.”

Giordano continues: “You know, it’s an honor and a privilege to play the blues. There is a lineage and you have to give credit where credit is due. I have so much to learn, but I would not be the player that I am if it wasn’t for Eric Clapton, Jimmy Paige, Jimi Hendrix, Stevie Ray Vaughn, Howlin Wolf, B.B. King and all of those guys. I think that Craig and Jimmy feel the same way. We have the influences who make us who we are as musicians and in essence, that’s why we are all here.”

Check out Delta Fuzz on November 27th at the 8th Anniversary Celebration of the Coachella Valley Brewing Company in Thousand Palms.

You can also see some of Delta Fuzz’ super rad videos, pics and fliers on their Instagram @deltafuzzband