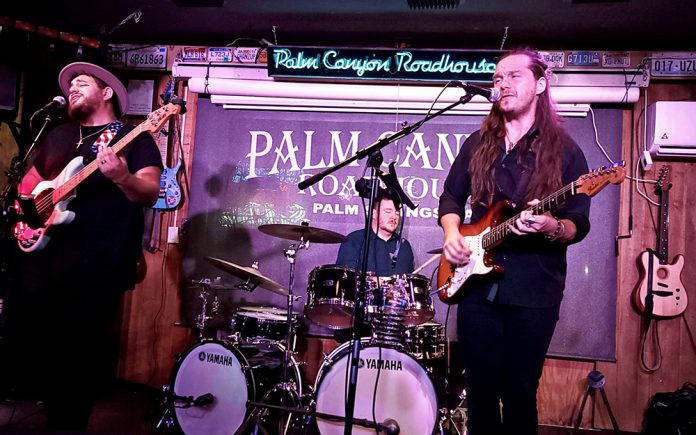 Derek Jordan Gregg is one of the most hard-working musicians in the whole Inland Empire area. Regardless of his daily challenges, Derek grinds out some of the most creative musical developments that contributes to the sound of the Coachella Valley’s spirit. His work is finally paying off when venues and talent bookers invite Derek to be featured in some of their exciting events and musical endeavors. Derek, yet again, established a new musical concept that now the whole Coachella local musician community can take part in: The Killer B Sides.

On Saturday, September 11th, Derek debuted his new band at The World-Famous Palm Canyon Roadhouse, located in Palm Springs, CA. The Roadhouse is known for hosting enticing live acts from all over California including major tribute acts from Vegas. This Palm Springs landmark is also the home of many new aspiring musicians who gradually become talented professional artists such as Derek. For the band’s debut, Derek featured original Hive Minds bassist and local cover band (Avenida) musician, Samuel Gonzales, along with the talented hotshot Nashvillian drummer, Josh Mighell. Together, they armed themselves with their versions of cover songs from recognized artists, along with Derek’s songs from his earlier work (The Hive Minds and Cocaine Nose Job). The Killer B Side’s first night at The Palm Canyon Roadhouse was a hit. Well-known accomplished local musicians such as Jimi Heil (Braun Fraulein) and Mikole E. Kaar (Mikole Kaar Jazz Club) also joined in and speculated the variations of cover songs, sung by Derek in his rocking recognizable vocals. If interested in becoming affiliated with Derek’s project, here is what you need to know and how you can participate:

Inspired by Wu-Tang Clan’s affiliate musical group, Keller beez, Derek constructed a similar model by having core members of Derek’s original project, The Hive Minds, that branched off to The Killer B Sides with interchangeable musicians covering renditions of popular favorite hit songs from mainstream artists, as well as some original work from his previous productions.

“It’s not really a jam project, but it’s an opportunity to feature other talented musicians to perform and showoff their skill sets. The Killer B Sides offers different flavors to our audience.” Derek explained. “This concept will give everyone a chance to connect and work with one another while building a bigger, and tighter network. Like a beehive.”

Killer Bees is a nickname to all those support the foundation of The Killer B Sides. How this group’s concept differs from a standard jam band, is that jam sessions/bands typically, but not limited to, tend to offer a show with a temporary identity without any specialized requirements, while The Killer B Sides provides a more identifiable image with a solid foundation despite of its alternating band members. Additionally, you do not necessarily need to be a musician OR a performer to be part of the project. Anyone can join and be a Killer Bee by simply showing the band support by being an overall fan.

How Does a Musician Become a Killer Bee?

Derek wants to give anyone an opportunity to perform live along with him and his Hive Mind members.

“This is a fun project for me, just me and my buds having a great time playing music.” Derek added. “If someone would like to be a performing Killer Bee, they are more than welcome to try out either on Thursday nights at the Four-Twenty Bank Dispensary, or Jam Session night at Palm Canyon Roadhouse on Sunday nights. Anyone can be a Killer Bee and when they are, they are part of a family.”

What Will Become of The Hive Minds?

The Hive Minds will always remain a key part of Derek’s enterprise. Although, The Hive Minds took a 3-year long hiatus (and an unfortunate delay due to Covid), Derek still pushes through, utilizing every opportunity to come out ahead while appeasing his fanbase. Derek insures that The Hive Minds are planning to reappear with new songs alongside with past favorite originals.

You can catch Derek Jordan Gregg on Wednesday, Sept. 22nd for the CD release of “Good Noise”, located and produced by The Palm Canyon Roadhouse, or follow him on Facebook/Instagram to keep updated on more of his music such as his solo project Gemini. To be part of The Killer B Sides’ Killer Bees family, be sure to attend his open mic sessions at The Four-Twenty Bank Dispensary and Lounge on Thursdays, or Sundays during The Palm Canyon Roadhouse Jam Sessions. Join in and keep the buzz goin’, you may be vibin’ with Derek on the next Killer B Sides show.