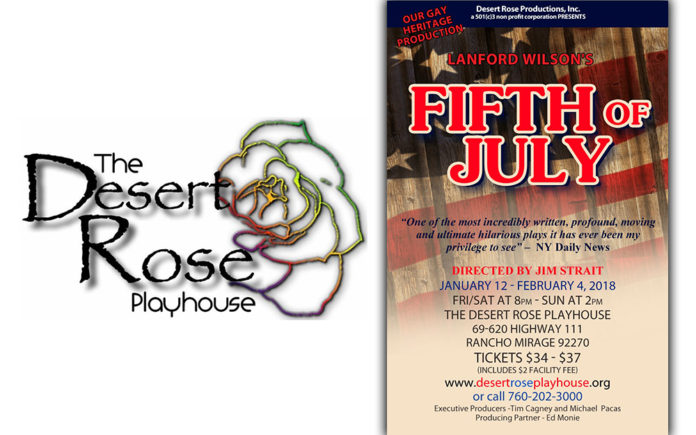 The Desert Rose Playhouse, the Coachella Valley’s LGBTQ+ Stage Company, will present Lanford Wilson’s Fifth of July as our sixth season’s Gay Heritage Production, opening Friday, January 12, 2018, for a four-week run.  Performances are Fridays and Saturdays at 8:00 PM and Sundays at 2 PM, through February 4, 2018.  Playwright Wilson was one of the pioneers of LGBT Theatre in New York and went on to a Pulitzer-Prize winning career with many Broadway and film credits.  Previous DRP Gay Heritage productions include The Boys in the Band, Love! Valour! Compassion! and Angels in America, Part One.

Fifth of July is set in the 1970s in a sprawling farmhouse in Lebanon, Missouri.  It is the home of “Ken Talley”, a disabled gay Viet Nam veteran, and his botanist lover, Jed.  They are visited by Ken’s sister, June, and her precocious teenage daughter Shirley, and by Gwen and John—the former a hard-living, pill-popping heiress who aspires to be a rock star, the latter her wary-eyed husband and manager. All are old friends from their rebellious UC Berkeley college days in the 1960’s where they were protestors and political activists who worked for what they hoped would be a better world.

The action of this play, one of a trilogy of plays exploring varied facets of the Talley family, centers on Gwen’s offer to buy the Talley farm to convert it to a recording studio.  Also desiring the property is “Ken’s” eccentric “Aunt Sally”, who wishes to scatter the ashes of her late husband on their land. As the play progresses, past affiliations are explored through dialogue that is sharp and funny and, in the final essence, deeply revealing of lost hopes and dreams and of the bitterness that must be conquered to perceive the good that life can offer.

“This is one of the most incredibly well-written, beautifully acted, profound and moving and often hilarious plays it has ever been my privilege to see in the American theater.” -NY Daily News

“Few contemporary playwrights are as humane, or as wise as Lanford Wilson. There aren’t many plays to see that are as interesting and absorbing and feeling and funny as this.” – Cue Magazine

“The characters are mostly flamboyant, their dialogue crackles with laugh-inducing lines and we find ourselves dazzled by Wilson’s virtuoso writing.” – The Hollywood Reporter

Tickets are $37 for evening performances and $34 for matinees, which includes a $2 per ticket Facility Fee.

Fifth of July, by Lanford Wilson, Our Gay Heritage Production