As a hard-working, socio-economically challenged bedroom and spa community, Desert Hot Springs residents filled the high school auditorium while many more watched online Thursday, September 10, to hear what candidates for City Council and Mayor had to say about the future of their beloved but often troubled town. 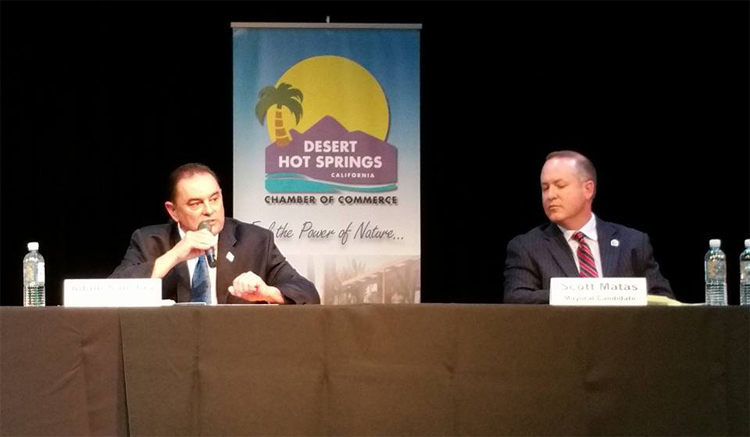 “The Candidates Forum is important for the voters of Desert Hot Springs,” said Heather Coladonato, President and CEO of the Desert Hot Springs Chamber of Commerce.  “This event brings everyone under one roof and provides a side-by-side view of the issues that concern voters.”

Local CBS anchorman Kris Long was charming, witty and fair as he managed the time limitations and moderated the forum.   Univision’s Ricardo Vela and Desert Sun’s Jesse Marx presented the questions, asking about social and economic issues. The candidates responded with mostly informed answers.  Topics ranged from support for a gay pride parade, the progress of an arts and entertainment district, to tax increases and economic development.

“The Chamber is the city’s business advocate,” said Coladonato.  “Our role is to provide information and to represent the interest of businesses with all levels of government – local, state and federal.”

The Chamber compiled the questions from business members, community leaders and residents.  As hosts, the Chamber is nonpartisan.

“It’s the Chamber’s job to stay on top of issues that concern and impact the local business economy,” said Coladonato.  “The forum brings relevant items to light and hopefully reveals the positions of the possible future leaders.”

The three-hour event was divided in half with council candidates first, followed by the mayoral candidates.   Well organized and controlled, many questions were asked during lightning-rounds allowing a wide range of pertinent topics to be covered.  City council candidates were able to present their views as well as show some “personality” to the audience.

“It is nice to see some new faces taking an interest and wanting to make a positive impact in the city,” said Coladonato.  With a population that is 60% Latino and 12% Black, Desert Hot Springs is starting to reflect that demographic in the run for its leadership roles.

“It is imperative that the Chamber get business friendly individuals elected into office for the success and well-being of the city,” said Coladonato.  “This year the Chamber Board will be interviewing all of the candidates one-on-one for possible endorsements.”

The Desert Hot Springs Chamber of Commerce has successfully served the community since it was established in 1947 (sixteen years before the city incorporated).  However, many on the current City Council have denied support, membership and involvement with the Chamber.   In fact, the Chamber office was forced to move its location after the city stopped its participation with the organization and opted not to renew its service contract for the management of the Visitors Center.

“As a Chamber, it’s our desire to see the business climate change by way of active partnership with the city’s elected officials,” said Coladonato.  “It is only through strong leadership, collaboration and support that the city will continue to grow, be successful and benefit all concerned.”