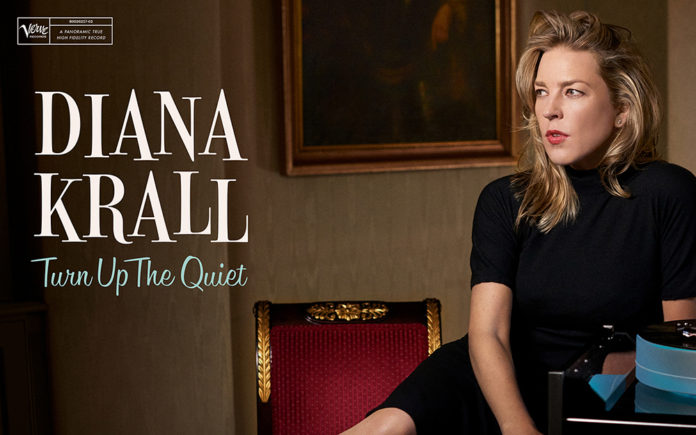 During the first half of the 20th century, phonographs became affordable for everyday folks and Pop music became, well, popular. From the Roaring ‘20s to the Eisenhower era, the most enduring songs came from the Great American Songbook.

Of course, all that changed with the advent of Rock N’ Roll. Bob Dylan, the Beatles and Joni Mitchell (along with Simon & Garfunkel, Carole King, Neil Diamond and myriad singer-songwriters), redefined the paradigm. Suddenly, it wasn’t enough to interpret “Stardust” by Hoagy Carmichael, musicians were expected to create songs that mirrored their personal experiences, or cryptically alluded to current events and social change.

It was liberating for both the singer and the listener, but there was still something to be said for witty, urbane lyrics like “I get no kick from champagne, mere alcohol doesn’t thrill me at all…some they may go for cocaine, I’m sure if I took even one sniff, it would bore me terrif-ically too, yet I get a kick out of you.” (Cole Porter wrote that in 1934.) Not to mention the sophisticated melodies and haunting refrains that remained indelible.

By the late ‘60s the Beatles’ had evolved from the innocence of “I Wanna Hold Your hand” to the efficacy of “Why Don’t We Do It In The Road.” The sexual revolution was in full swing and there was no time for subtlety. But after a while, even Rockers began to miss the nuance and elegance of that bygone era.

Released in 1970, Sentimental Journey marked the solo debut of Beatles drummer Ringo Starr. It was a record made up entirely of songs from Hoagy, Cole, Fats Waller and Johnny Mercer. Ringo’s best pal, eccentric singer-songwriter Harry Nilsson followed suit. He even employed Frank Sinatra’s arranger, Gordon Jenkins for his 1973 standards album, A Little Touch Of Schmilsson In The Night.

And on it went, sometimes the results were wonderful, like Willie Nelson’s 1978 collection Stardust, or Carly Simon’s 1981 album Torch. Linda Rondstadt recalibrated her whole style, morphing from Laurel Canyon Hippie-songstress to Big Band Era chanteuse on a triptych of early ‘80s records arranged by another Sinatra stalwart, Nelson Riddle. Some musicians, like Joni Mitchell, Bette Midler, Tom Waits and Rickie Lee Jones had displayed an affinity for classic songs from the beginning of their careers, others saw it an opportunity to cash in.

Linda Ronstadt’s success opened the floodgates, suddenly everyone jumped on the standards bandwagon. Natalie Cole resurrected a moribund Soul/Pop career by recording an album of her dad’s signature songs, (she even included an electronically enhanced duet with her long deceased father). Predictably it soared to the top of the charts and won numerous Grammy Awards.

Rod Stewart took it six steps further by aurally raping the Great American Songbook over the course of six albums. Having exhausted His “Do Ya’ Think I’m Sexy” persona (um, no), he reinvented himself as a debonair crooner. The Greatest Generation seemed delighted that these erstwhile long-haired hippies were now eschewing lyrics like “spread your wings and let me come inside” and extolling “the way you look tonight.” He made millions. Any sentient adult weaned on Bobby Short, Blossom Dearie or June Christy was made nauseous by Rod-the-Mod’s callow appropriation of these songs.

This lengthy diatribe (or cranky overture) acts as a preface as a way to introduce Diana Krall, someone who came by the Great American Songbook organically. She was born in Nanaimo, British Columbia in late 1964, (the height of Beatlemania), to Adella, a school teacher, and Jim, an accountant and Jazz enthusiast. She took up the piano at age four and was seduced by her father’s impressive record collection. (Apparently, he owned every Fats Waller album that was available and in print).

By age 15 she was playing Jazz piano in a local restaurant. She received a scholarship to the prestigious Berklee College Of Music in Boston. When she finished her studies she moved to Los Angeles intent on a career in music. She was in L.A. for about three years before relocating to Toronto, by 1990, she moved to New York City.

It was there in 1993 that she released her debut, Stepping Out on the tiny Justin Time label. Accompanied by up-and-comers John Clayton on acoustic Bass and John Hamilton on drums, she romped through a set of classics From Duke Ellington, Rodgers & Hart and Harold Arlen. She even managed to tuck in a composition of her own.

The cognoscenti took notice of her distinctive piano style and seductive contralto vocals. By her second effort, 1994’s Only Trust Your Heart she had jumped to the GRP label and was being produced by Tommy LiPuma. The industry legend had worked with everyone From Miles Davis and Bill Evans to Barbra Streisand. Tommy, along with singer Rosemary Clooney and bassist Ray Brown, became trusted mentors. Then, her third album put her on the map.

All For You: A Dedication To The Nat King Cole Trio arrived in 1996 on the Impulse! label (a Jazz imprint that began in the ‘50s). Rather than cover tried and true songs like “Unforgettable” and “Mona Lisa,” Diana dug deep into Nat’s oeuvre, resurrecting tracks like “Frim Fram Sauce” and “Gee Baby Ain’t I Good To You.” The album peaked at #3 on the Jazz charts and went Gold in America and Canada.

Her next two albums, Love Scenes in 1997 and When I Look Into Your Eyes in 1999 defied expectations. Love… hit #1 on the Billboard Jazz charts and was certified platinum. When… was the first Jazz record in 25 years to receive a Grammy nomination for Album Of The Year. Although she lost that category, she won Best Jazz vocal.

As the 21st century dawned Diana’s sixth studio album arrived. The music was a mix of standards and Bossa Novas; it was met with critical and commercial success, as was her next effort, “Live In Paris.” On a personal level, 2002 brought heartache and joy. Diana’s mother passed away, following a valiant battle with multiple myeloma. Rosemary Clooney and Ray Brown also died that year. But she also met and fell in love with Elvis Costello.

The British singer-songwriter, born Declan McManus, first made a name for himself as an “angry young man” during the Punk era. But the son of a Big Band vocalist, Elvis had successfully crisscrossed genres, recording albums of Country, Punk, Pop-Soul and Classical music. The pair were a perfect match, and married in late 2003 at Elton John’s English estate.

Her next album, 2004’s The Girl In The Other Room, was almost a joint effort with Elvis. Taking a hard left turn, it featured songs the couple had co-written, as well as Diana’s interpretations of more contemporary songwriters like Mose Allison, Joni Mitchell, Tom Waits and Costello himself. Although purists would probably have preferred more standards, the album still went to #1. Two years later the couple collaborated on a more personal project, their twin sons, Dexter and Frank.

In the intervening years, Diana has released an album about every three years. From This Moment On in 2006, then the Bossa Nova-heavy Quiet Nights arrived in 2009. T-Bone Burnett produced 2012’s Glad Rag Doll which focused on Jazz songs from the ‘20s and ‘30s, (favorites culled from her father’s record collection).

She enlisted a fellow Canadian, David Foster to produce Wallflower in 2015. This time she covered Rock songs that she had grown up hearing on AM Pop radio. It was intriguing to hear Diana tackle well-known songs from Elton John, The Mamas and The Papas, Eagles and Crowded House. She also left her imprimatur on what can only be described as “guilty pleasure” songs from 10CC, Jim Croce and Gilbert O’Sullivan.

Now she has returned with her 13th studio album, Turn Up The Quiet. Here, she reunites with Tommy LiPuma, for their seventh collaboration, they pared down the instrumentation to trio settings, mostly featuring vocals, guitar, bass and piano. The opening cut, “Like Someone In Love,” completely sets the tone. a classic Jimmy Van Huesen song ,it was originally a hit for Dinah Shore.

Walking bass lines and Diana’s dulcet vocals sketch out the melody for the first couple of verses. Soon sweet-soul guitar riffs connect with cascading piano notes, The playful tune acts as an amuse bouche for the rich aural banquet to come.

Diana eschews the familiar (ne’ time worn), arrangements for three well-known tracks. “Isn’t It Romantic” from Rodgers & Hart is as slow as molasses. It opens with a gossamer guitar-vocals pas de deux that is slow and sultry; as the bass and piano kick in, along with brushed percussion, vibes and a string section, Diana’s subtle caress of the lyrics acts as an aphrodisiac.

Cole Porter’s “Night And Day” is recast as a breezy Bossa Nova. Supple piano notes surround spacious strings as Diana insists that “This longing for you follows wherever I go, in the roarin’ traffic’s boom, in the silence of my lonely room/I think of you night and day.”

“Sway” gets the biggest make-over. Originally written by Mexican composers Luis Demetrio and Pablo Beltran Luis,’ Norman Gimbel added lyrics in English and it was a huge hit for Dean Martin in the early ‘50s, (it has since been bastardized by everyone from Michael Buble’ to the Pussycat Dolls to Il Divo). Diana strips away the prosaic Rumba rhythms, opening with rustic acoustic guitar and upright bass. Her mien is subtle and seductive. The instrumental coda of creamy strings, feels equally inspired by Burt Bacharach and Barry White.

Both “I’m Confessin’ (That I Love You)” and “Blue Skies” take a page from the Gypsy Jazz popularized by Django Reinhardt and Stephane Grappelli. The former, first recorded by Fats Waller in 1929, features prickly guitar chords and sprightly piano shaded by swooping fiddle notes.

The latter, an Irving Berlin chestnut, first introduced in 1926, is anchored by syncopated bass, plucked, bee-stung guitar and Diana’s incomparable piano; as the arrangement accelerates it shapeshifts from Gypsy Jazz to Western Swing.

Other interesting tracks include the stripped down piano-bass-vocals workout of “No Moon At All.” Again Diana’s rollicking piano style takes center stage. Meanwhile, Johnny Mercer’s “Dream” is quiet and incandescent. The album closes with a jumped-up version of “I’ll See You In My Dreams,” that is once again a perspicacious blend of Gypsy Jazz and Western Swing.

Sadly, Tommy LiPuma died right before the album’s release, Diana has dedicated it to him. Interpreting songs from the Great American Songbook isn’t a calculated career move for her, it’s a way of life. Turn Up The Quiet is an impossibly elegant record that truly swings.