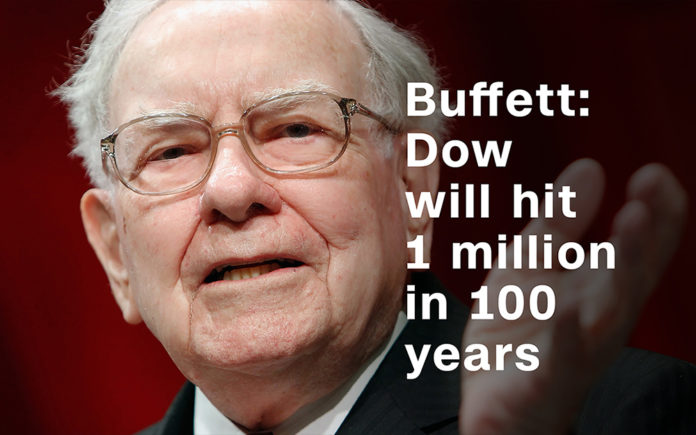 Last year, Warren Buffett predicted that the Dow would reach 1,000,000 within 100 years. To achieve that level of growth from the current 26,000 level, the Dow would need to go up by only 4% a year – less than half historic levels.

Had Buffet become a long-term pessimist?

Not at all.  Buffett is trying to help people understand that even if growth is below average for a very long time, there is still an awful lot of growth in front of us.

While prices have gone up, so too have earnings as well as the quality of life in the United States.  Debt has ballooned but so too has Dow.  Does this suggest that a crash like 1929 is in the wings?

Not at all.  While debt increased, so too did wealth.

How is wealth measured?  Without getting too wonky, governments around the world print new money.  When done correctly, the new money represents the value created by the people of that country.  When done incorrectly, look no further than Puerto Rico, Turkey or Italy.

We need some inflation as it is good for a nation’s psychology.  Would you want to earn the same amount every year?  A little bit of inflation helps society function better.

What many of us forget is that advancements by society or innovation, spur growth which is responsible for the increase in wealth for society raising everyone’s standard of living.

Economies have regular growth spurts and then they have bigger growth spurts.  We are currently in a Third Industrial Revolution which began back in the 1980s when information moved from an analog format to our current digital format.  As such, this 3rd revolution is commonly referred to as the Digital Revolution.  These revolutions are very good as they create wealth and higher living standards for society at a rapid pace.

While this latest revolution is in its fourth decade, it appears to be entering a SuperCycle phase.  A supercycle is where technological advancements change the way we do everything in society.  Over the next twenty years, the way we drive, communicate, eat, exercise and receive healthcare will experience advancements once only imagined in science fiction novels.

Whether you want to call it part of the Digital Revolution or some other name, this Digital SuperCycle will bring more value to society than anything that we have experienced to date.  While advancements will cause disruptions just as the automobile disrupted the horse and buggy, this supercycle will improve the quality of life for all.  The growth in wealth that we can expect will make the debt levels of today look like those of the 1960s.  Depending on your perspective, this could be the beginning of a Utopian world or something out of a dark horror film.

Haddon Libby is the Founder and Managing Partner of Winslow Drake Investment Management and can be reached at Hlibby@WinslowDrake.com.  For more information, please visit www.WinslowDrake.com.