By now almost everyone has heard of Botox.  And most people know that it can be used to treat the “frown lines” between the eyebrows, or the “elevens” as it is sometimes referred to… but what other places on the face can Botox help? 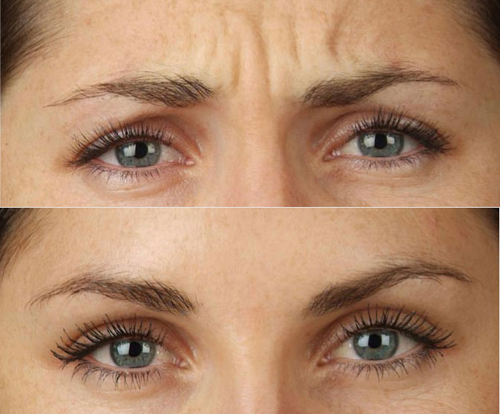 Very often when we treat the frown lines we also treat the horizontal, forehead lines caused by raising your eyebrows up.   Treating both areas together gives a smooth appearance to the whole forehead as a unit. Another commonly treated site is the crow’s feet at the sides of the eyes.  These lines are formed by squinting.  By using Botox in this area, we can smooth the appearance of the crow’s feet but we can also create a little brow “lift” which can open up the eyes and reduce that tired, heavy brow look. Some people even need a little Botox on the side of the nose to soften the “Bunny Lines” that happen when we crinkle up the nose while smiling or sometimes, frowning.

Surprisingly, Botox is not just for the upper face… the lower portion of the face can be treated too!  The chin is a great place for Botox if you tense up and have a dimpled effect in that area.  It’s referred to as a “golf ball chin” because it resembles the divots in a golf ball! Even the neck can be treated… The platysma is a very thin muscle that runs from the jawline down to the chest and can be the cause of visible, vertical “bands” as we age… This pulling from the platysmal bands can even accentuate the “jowls” of the face.  Botox in this area can soften the pull and change the prominence of the jowls.

You can even use Botox around the mouth.  In very small amounts, Botox can help with the vertical lines around the mouth.  These are typically called “smoker’s lines” but non-smokers get them too.  Drinking from a straw or whistling can cause you to purse your lips and this can cause these lines to form.  The corners of the mouth can be treated to reduce the frowning appearance that some have.