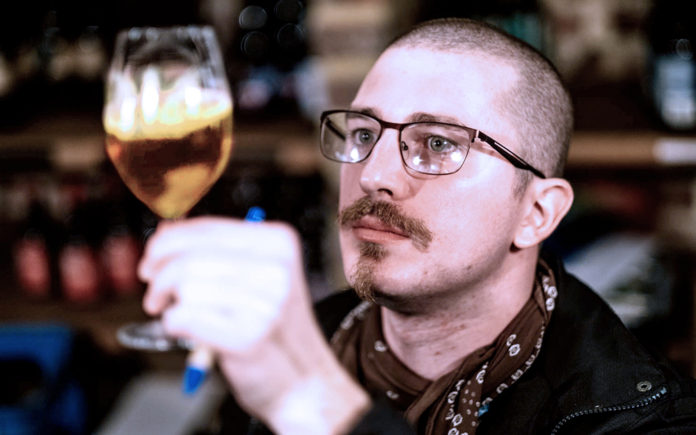 There is a huge difference between being a craft beer steward (not the ranking as granted by a cicerone program) and a craft beer snob. Much like the way that hunters are tasked with being stewards of the land, aficionados who are enthusiastic about good beer are the stewards of craft.  A craft snob is a pretentiously dishonest consumer whose agenda is to show superiority over others in the craft drinking community by forging an air of exclusivity.

The snob accomplishes this in several ways, usually by claiming a superior palate, which I can tell you, dear reader, is usually not that superior. They’ll claim to taste off-flavors and inconsistencies that other people can’t, and then use this to justify their ability to appreciate only the most elite beers around. Some snobs find glee in gloating superior knowledge, throwing jargon around that you may not be familiar with and referencing hyped beers that you haven’t tried, all in an attempt to impress an image. 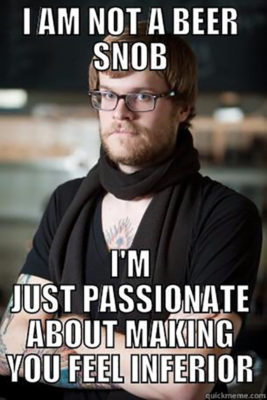 The beer snob will make statements like how he used to drink Ballast Point, but not anymore since they “sold out”. If asked what he means by that, the snob may state that the beer doesn’t taste the same since Constellation bought the company; a very objective statement with a strong confirmation bias behind it. The knowledge that there are now big money investors involved in what was once a small and independent company is very distasteful to many who like to feel exclusive. I had a gentleman approach me at the Brewery I work at, Brewcaipa Brewing, and he asked me about the new La Quinta taproom that we just opened. No sooner had I started to explain our business model to him, that he interrupted me by saying, “But you guys aren’t trying to get TOO big right? Don’t be like Hangar 24. I was one of their first regulars, I used to go there all the time. Then they got too big and they suck now.” I blinked and smiled and reassured him that our tiny company would remain tiny.

The craft drinking community is very exclusive by nature and would choose to remain as selective and niche as possible, the same way that underground and indie music fans can be. Beers and bands are beloved when they give their fan base a sense of ownership by being small and inaccessible to the mainstream. If only a handful of people can enjoy it and you’re one of them, there’s a special feeling of intimacy that is catnip to a beer snob. When Metallica released their Black Album in 1991, it capitulated them to superstardom by introducing them to a mainstream fanbase, which in turn alienated a lot of their original underground fans. Craft beer fans are no different. Any perceived changes are viewed with skepticism and deemed negative, and the craft beer snobs demonize the once indie brewery with glee.

Because the perception of superiority is everything, you will never see a craft snob sully his lips with macro-swill, especially if it’s been touched by the dark side of the force, aka AB InBev. Lagers made with rice or corn are viewed as inferior, most likely because the snob thinks that the Reinheitsgebot is somehow relevant to modern brewing. An old Bavarian law that was created to prohibit brewers from using wheat and rye so that bakers wouldn’t have to compete for the ingredients used to make their bread, the Reinheitsgebot allowed only barley, hops, and water to be used in beer (yeast wasn’t yet discovered). When microbreweries (the old term used for craft breweries) like Sierra Nevada and later Stone emerged in the 80’s and 90’s, their approach to beer was to follow the old ways of barley, hops, water and yeast. By the early 2000’s, the idea emerged that a beer made with anything but those four ingredients was inferior. 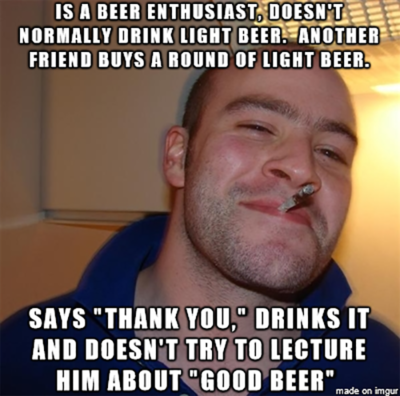 Although the craft beer snob has been around as long as modern craft has, its his distant cousin, the craft beer hipster that emerged as an unlikely steward of beer. Gaining the moniker “hipster” for ironically enjoying PBRs as much as they do pastry stouts, these are beer drinkers that don’t care as much about being exclusivists as they care about being seen drinking retro brands or so-bad-it’s-good beer (I may actually fall in this category if I’m being honest with myself). I honestly find Coors Banquet to be a well-made and enjoyable beer, as well as Olympia and Rainier Lagers. I don’t find Budweiser or Miller Genuine Draft to be tasty beers, the same as I don’t find a lot of small craft beers to be very good either. All macro is not the enemy, and people who buy it instead of the beer I craft at Brewcaipa aren’t supporting the evil empire.

Although he owns a bloated sense of self-importance, the beer snob does actually very little to support the craft beer scene. Most small breweries are beneath his standards, and all larger breweries have lost his interest, so the precious snob is committed to supporting very few breweries, which I suppose is better than none.

It’s okay to like what you like but be aware how painfully obvious it is to everyone else when you are being an elitist who’s just showing off his scene superiority. That’s even worse than the guy who likes Bud Light simply because he’s used to its insipid flavor, because at least that guy’s being honest about his tastes. The snob is only in it for himself. Do not, dear reader, be a beer snob.