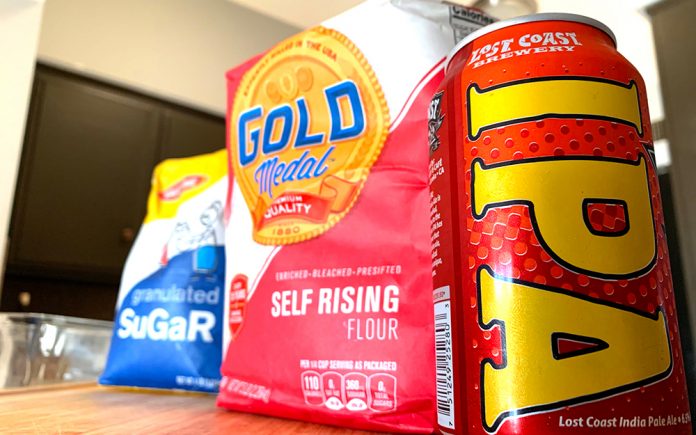 I made my first batch of bread the other day, and it couldn’t have been easier or more delicious. A friend sent me a recipe that she found in an obscure food blog, as my friends are fond of doing if the post is beer related. I was immediately intrigued by the simplicity of the recipe as it only called for three ingredients. While other people might be enjoying the challenges of creating a sourdough starter, I enjoy the challenge of trying to incorporate beer into everything I make. I researched the history of bread and beer, and was surprised at the linked origins between these ancient creations.

Beer and bread have been fundamentally entwined since the birth of civilization, sister creations that gave nutrition and sustenance to the early Mesopotamians and Egyptians who discovered the versatility of combining cereal and water. The precursor to beer was just that, cereal water. Barley and/or wheat kernels were left to soak in a pot of water until they sprouted (which we now know is caused by amylase enzymes, which convert starch into maltose). Hot stones were thrown into the pot to heat the mixture (which is referred to as a mash in brewing terms), helping starch conversion even further. Voila, that was ancient beer. This gruel was then drunk through a cane straw which filtered the liquid and made it easier to imbibe. At some point, these pots of cereal soup were left out and inoculated by wild yeasts just floating on a passing breeze. The yeast consumed the sugars and fermented the liquid, giving a slightly zingy taste and pleasantly intoxicating qualities. The same pots were used batch after batch, using the same yeast that settled to the bottom of the vessel, and beer was continuously made this way.

According to a theory, the watery mush that was ancient beer may have accidentally been spilled onto hot coals, drying and baking in the heat of a fire until a small, hard cake was left. This cracker-like concoction of cereal and water was the first bread, born from beer and every bit as important as its liquid counterpart. The first ever bread was made from beer, so it’s no wonder that making bread with beer has been a timeless tradition to this day. And now with the entire planet being asked to stay in their homes and quarantine, many amateur chefs have turned to breadmaking as their new pastime. 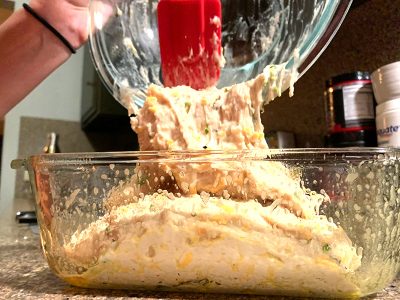 With a recipe this simple, every ingredient is a star player, with the beer you choose making the biggest impact on the bread you make. While Budweiser and Guinness may be the brew of choice for many beer bread veterans, no style is off limits! Here is a quick guide to the most common types of beer you can choose from, and how they affect the bread you’ll make.

Pale Lagers/Cream Ales: The clean and crisp nature of this style will give your bread a similar, light flavor. Think saltine crackers and you’ll get an idea for the easy flavor imparted. Use this beer to make an all-purpose, general white bread.

Hefeweizens and Wheat ales: Using an American wheat beer in a wheat bread is a surefire way to give your bread a simple yet pronounced character. European hefeweizens will give a touch of spice, both styles are optimal for this recipe.

Amber/Red lagers or ales: With their more pronounced malt character and darker color, these beers will impart toasted, caramelized flavors and a touch of color to your freshly baked bread. 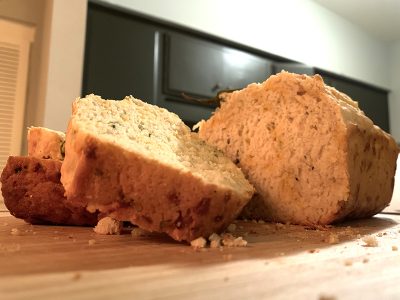 Blonde/ pale ales: These brews will give you a bread with balanced complexity, and just a touch of earthy, hop bitterness at the end of every bite.

IPAs: The style I chose to make my bread with. You’ll get a loaf with a more pronounced, earthy bitterness that works well if adding additional ingredients like herbs, cheese, or chili peppers to your bread.

Brown ales/Porters/Stouts: The roasted malts in these dark ales work wonderfully in bread, adding the most character and complexity as well as a darker color to your finished product. Guinness has been a longtime favorite of many beer bread makers.

Preheat your oven to 375 degrees. Coat a loaf pan with cooking spray.

Pour your flour and sugar into a medium mixing bowl, pour a bottle or can of beer over the top of it. Use a wooden spoon to mix and fold until the batter is fully combined; it will be thick. Spoon into loaf pan and bake for 45 minutes.

Remove from the oven and let your bread cool for 10-15 minutes. Flip your pan over to remove the loaf, and cut into slices.

Beer bread can be that easy! The texture is dense and spongy. The flavor reflects the beer you chose, but will always be grainy and lightly sweet. Add jalapenos and cheddar cheese, rosemary and olive oil, or even sundried tomatoes and finely diced garlic. It’s your bread, do what you want with it, and enjoy!