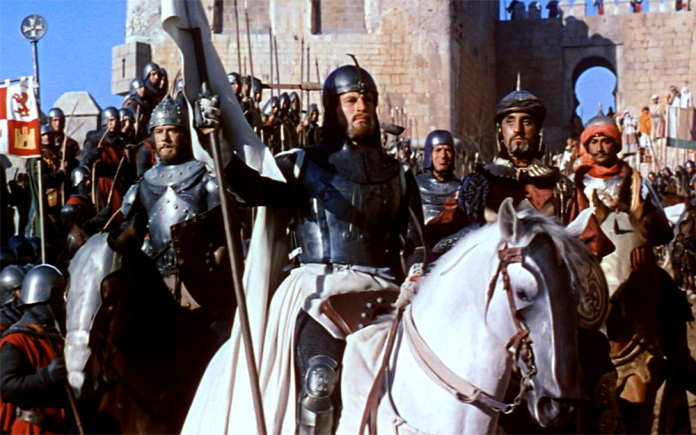 This Oscar nominated epic is one of the most spectacular of all mega productions.  Digitally remastered and top-loaded with generous and revealing special bonus features.

El Cid stars Academy Award winners Charlton Heston and Sophia Loren in two of their iconic performances.  Anthony Mann brilliantly directs this classic tale of the 11th –century hero who fought to unite Spain.  Some historians have called him the  “compassionate warrior.” 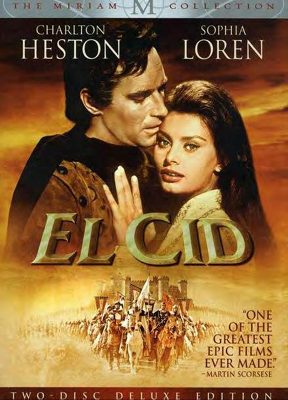 What makes this movie especially memorable beyond the core story is the sweeping visual composition, stunning locations and detailed and production design.

The 12th-cntury castle of Torrelobaton, known as the “Castle of Admirals,” was chosen to represent El Cid’s home at Bivar.  The setting for the feud between the young kings in the castle of manzanares, north-east of Madrid.  Used as background for the early capture of the Moorish Emirs is the castle of Ampudia, once the focal point for the revolt for a revolt against Emperor Charles V.

The castle of Belmonte seen in the tournament was once owned by Empress Eugenie of France.  These imposing edifices were selected by director Anthony Mann after inspecting over 90 locations. 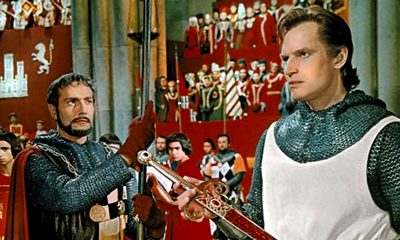 The movie tracks El Cid’s extraordinary journey from peace-broker accused of treason to the king’s fighting champion, and later from exiled hero to legendary martyr.

The El Cid of this great movie story actually lived.  The legendary hero of Spain whose real name was Don Rodrigo Diaz de Bivar.  The precise date of his birth is not known, but it was likely around 1040 A.D.

Although he fought on the side of the Moors and spoke Arabic, he was identified in the Spanish mind as the true and genuine incarnation of the Castilian Christian spirit.

His deeds are recorded in a group of very long poems, the most noted of which is Centar del Mio Cid, written around 1140 A.D.

This beautiful and relevant film touches on issues that are as volatile today as in the historical past.  Is there a solution to our dangerous religious conflicts?

Martin Scorsese says “there is something truly monumental about Hston at his greatest – he doesn’t just play it but embodies it..  This is one of his finst roles, and he and Sophia Loren are excellent together.  In fact it’s possible that the reported tension between them added rather than detracted from their performances, giving it a certain level of formality that’s right for the material.”

Miklos Rosza’s fine score and the great cinematography by Robert Krasker (The Third Man) and the lush production design by Veniero Colasanti make this film unequaled in scope, grandeur and emotional power. This fiercely moral action-filled epic is an essential part of any film lover’s collection.  It is a shame it hasn’t ben seen on the big screen in almost six decades.  How long until we have a 4K UHD edition that does it justice for the hi-def home theater screen?  DVD.  Miramax.

I want to hear from you.  What are you watching at home or in a theater?  What classic film would you like to see in a 4K edition?