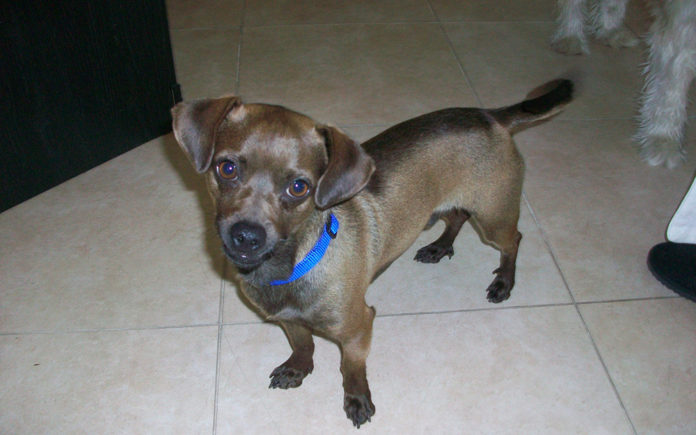 Elvis sang the “Jailhouse Rock” one December when he ended up at the Coachella Valley Animal Campus, the local county shelter.  While other dogs played with new toys and romped through Christmas wrapping, it was a “Blue Christmas” for this little dog and his cellmates at the “pound”.

Soon the luck of this small Pug/Chihauhua/Dachshund fellow changed.  Elvis came into Loving All Animals’ Mobile Mutts rescue program.  But it still proved to be a long road home for Elvis who holds an unenviable record for one of the longest times spent in the foster program. 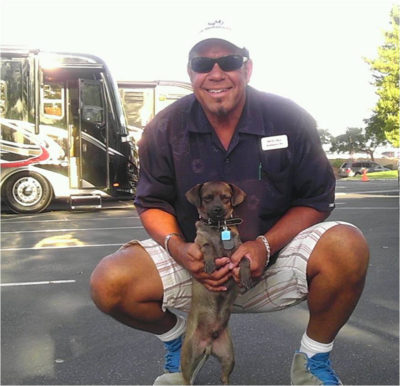 Elvis came faithfully to all adoption events and was admired but never adopted.  Often one of the husbands would admire this handsome dog with the sable mink looking coat.  Then his wife would nix the deal. His foster mom Maritza Rodriguez stated, “Elvis is a calm, affectionate, playful dog who loves going to the dog park.  He’s perfect!”  Lynne Lockwood and I took dogs to a Sun City Shadow Hills adoption event, and again Elvis was left behind.  I told Lynne, “This is it. I’m going to get Elvis adopted today!”

Elvis was often overlooked for the little, white fluffy dogs. Realizing Elvis’ appeal to “macho” men, I made a list of the likely places to find them.  Matching the right dog to the right owner is critical.  First stop was McMahon’s Recreational Vehicle sales office, where the “alpha” guys were lounging around the sales office on a scorching hot afternoon.  Mike Hill said he was in the market for a dog.  Mike, a single guy, explained that he lived in an RV parked on the lot and traveled to RV shows.  Elvis checked out Mike’s RV and made himself at home

WHAT HAPPENED NEXT WAS AMAZING.  MIKE’S CELL PHONE RANG AND HE SHOWED US THE NAME “ELVIS” APPEARING ON THE PHONE.  Turns out it was Mike’s best human friend named Elvis and he is an Elvis impersonator!  It seemed like an omen.  I told Mike that Elvis was a chick magnet, attracting the ladies and getting extra points when they find out he is a rescue dog.  Mike told a co-worker, “My heart is fluttering thinking about that dog.  It’s like I’m falling in love for the first time”.  Mike called the night he adopted Elvis to report, “This is the best dog I’ve ever had!  You were right, he’s a chick magnet.  We got lots of attention at PetSmart!”  ELVIS IS MIKE’S “GOOD LUCK CHARM”.

In the spirit of “Follow that Dream” Mike and Elvis are often on the road to RV shows throughout California Dogs are traveling animals, and Elvis thrives in his new adventure filled life.  Elvis has an area right outside Mike’s glass covered office, and he accompanies Mike whenever he has a customer.  Mike says proudly, “I’m the salesman, and Elvis is the closer!”  Elvis is good for business and goes on RV test drives and house calls.

Mike reports, “I knew right away Elvis was the dog for me.  I like the way he looks with the racing stripe down his back.  I like his energy, his playfulness, the way he’s good with people which is important in my business.  He’s a great buddy and great companion.  I love him.”  Elvis sleeps by Mike’s side at night with a little stuffed lion.  Dogs love to perform tasks, and they bring happiness to the humans in the workplace.  Sometimes the best things come to those who wait, and Elvis finally found the perfect home.

“Are you Lonesome Tonight?”  Head over to see hundreds of wonderful animals at the Coachella Valley Animal Campus, the local Riverside County shelter at 72050 Pet Land Place in Thousand Palms, (760) 343-3644.  You can contact Loving All Animals at (760) 834-7000 or www.lovingallanimals.org for information about pet adoption.