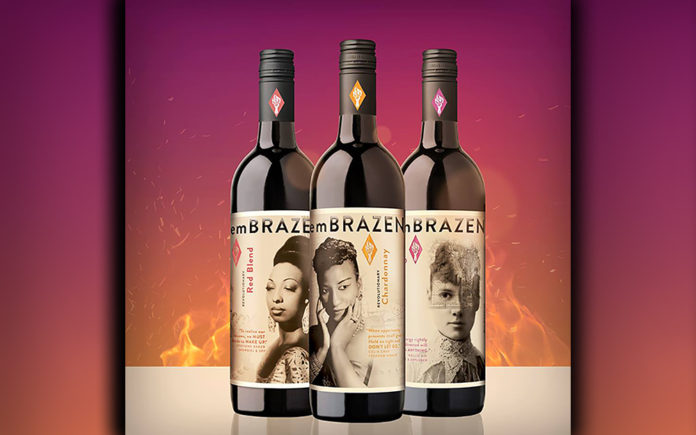 For those wine enthusiasts who keep their eyes on progressive politics and culture, perhaps you raised your glasses and offered a toast in honor of Women’s Equality Day this past August 26—the anniversary of the 19th Amendment giving women the right to vote.

As the wine world is wont to do, they’re always in to cheer on and support a myriad of causes and events.  And as you may be aware of, some of the activists produce wine as well. So here we go: Women are more engaged, energized and resolute than ever. All eyes are on the future, and women (and like-minded men) are rallying for women’s empowerment and advancement.

Bring now to the table, emBRAZEN, a new trio of California wines whose launch was timed to Women’s Equality Day.  We are told, “emBRAZEN is more than just a wine brand. It’s a call to arms, encouraging women to reclaim their narratives and rewrite history.”

This company is serious—it’s more than just a marketing ploy. emBRAZEN invites the next generation of women to Take Up The Torch and lend their strength to make a lasting impact in the world. And to further incite enthusiasm for the new brand and encourage women with their progressive passions, the Take Up The Torch initiative will grant one woman $25,000 in support of her cause.

“Women are paving their own paths and taking control of their futures by speaking boldly to ignite progress and change the world,” says Patricia Montagno, Vice President of Marketing for Treasury Wine Estates, the parent company of emBRAZEN. “Through our Take Up The Torch program, emBRAZEN recognizes local unsung heroes who deserve support to achieve their community enhancing goals.”

emBRAZEN wines take inspiration from extraordinary women of the past who dared to shatter convention. Now available nationwide, the trio of California wines, including a Chardonnay, Cabernet Sauvignon and Red Blend, each feature a historic female pioneer who defied convention and sought to bring about positive change in the world. The labels come to life through augmented reality driven by the Living Wine Labels app, as each heroine shares her personal story.

One would think that Treasury Wine Estates would especially bring on a woman winemaker to craft this new wine line-up.  It makes sense, given the whole picture of the project.  Well—of course they did!

Those who are keen on Santa Cruz Mountain wineries already know well of the award winning world class Bargetto Winery.  Olivia Teutschel was the first women winemaker at Bargetto and is now on-board with Treasury Estates.  She has crafted the three bottlings that honor the three trailblazing women of the past who refused to let tradition, convention or boundaries restrict their belief and efforts in shaping a more equitable world.

Josephine Baker was as bold on the stage as she was off of it. A show-stopping entertainer, activist, and undercover spy, Josephine was a force to be reckoned with in the Civil Rights Movement and the French Resistance. As one of the first women of color to command the global stage, she refused to perform for segregated audiences. Beneath it all, she held a bold secret, working as a rebel incognito to protect her beloved France from the Nazi regime.

Influenced by Josephine’s zeal, this nuanced, revolutionary Red Blend, audacious in character, is bright, intense and perfectly suited for those as bold as the wine. Irreverent hints of mocha & spice lend depth to nuanced layers of ripe red fruit, while silky tannins linger on the palate.

Nellie Bly shattered expectations for women in the newsroom. As one of the first female journalists to go undercover, she posed as a patient in an insane asylum, braving abuse and torture to expose the dark truth behind the padded walls and sparking nationwide mental healthcare reform. As a world traveler, she set out on a race to tour the globe, beating Jules Verne’s Around the World in Eighty Days by over a week.

Bold where others are bland, daring where others falter, this revolutionary Cabernet Sauvignon refuses to bow to convention. Concentrated flavors of blackberry and cherry persist on the palate, leaving a lasting impression.

Over the week-end, our family enjoyed this Cab with a grilled medium rare rib-eye steak.  It was a great pairing because the black fruits of the wine stirred in the background allowing the delicious steak to shine.

In an industry previously dominated by men, Celia achieved 23 best-selling gold albums and was the most successful Latin artist of the 20th century. Celia took her love of Cuba global with flamboyant costumes and larger than life performances blazing trails well into her later years. As she danced across the stage at the age of 76 to receive her second of three Grammys, she proved you’re never too old to brazenly revel in the spotlight.