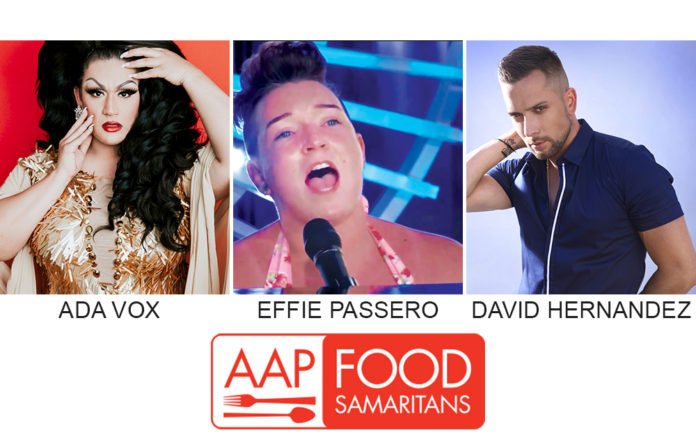 Celebrity Doodles will present ENCORE: A CELEBRATION OF AMERICAN IDOLS with Idol top finalists Ada Vox, David Hernandez, and Effie Passero on Saturday, November 3 at 6:30 PM. All three performers feature incredible voices and together will bring down the house to help celebrate Palm Springs Pride with a fantastic celebration of fun, festive music, and dance. The event will take place at Zelda’s nightclub, 611 S. Palm Canyon Drive. Show tickets (no-host bar) are $45, and Premium tickets (including a meet and greet) are $90. Sky Box premium tables for 4 with eight complimentary drink tickets, appetizers and a meet and greet are $600. A portion of the event’s proceeds will benefit AAP – Food Samaritans.

“We are thrilled to bring these singers and their mind-blowing voices to Palm Springs to help celebrate Pride,” said event producer Peter Demopoulos. “ENCORE: A CELEBRATION OF AMERICAN IDOLS will bring some of the best entertainment offered at this year’s Pride event. It promises to be a fantastic show and we are proud that this event helps support the community by serving as a fundraiser for AAP – Food Samaritans.”

Ada Vox is a 24-year-old new singer/musician that rose to the number 10 spot on Season 16 of American Idol. Adam Sanders (aka Ada Vox), had been a contestant on Idol’s original run in season twelve, but hadn’t made it past Hollywood week because his talent didn’t click with the judges. So Adam created “Ada Vox,” a drag persona through whom he could sing anything he wanted and convey big diva songs to their fullest extent. Ada quickly won over the judges and impressed them each week with seismic performances of Radiohead’s “Creep” and Nina Simone’s “Feeling Good.” Although the audience did not vote Vox through to the Top 10, the judges waved her through without hesitation after her earth-shattering rendition of Queen’s “The Show Must Go On.” Ada now spends her time as a mainstream artist, touring the world and selling out arenas.

Effie Passero, a 26-year-old singer/songwriter from Modesto, California, was one of the impressive contestants of the 2018 season of American Idol. Judges were shocked and impressed and gave her a standing ovation once they heard her sing. Lionel Ritchie walked up close to her saying that with that kind of sound, he was sure she had an “extra volume knob” on her. Katy Perry, with her jaw hanging open said, “I just want to know who you are, how’d you get that voice and why are you a property administrative manager?” Luke Bryan said, “I believe you’re a presence, you’re a look. I believe you have the whole thing going on, and when you deliver that, with the way your voice is, it’s like a command.” All 3 judges said they wanted to get to know her better and spend time with her, calling her a magic bullet – a secret weapon they were seeking. Though trained in opera for 10 years, she decided to pursue more of a singer songwriter path and has written more than 200 songs. Her real passion is rearranging music from the 1960s, 70s and 80s into rock piano ballads. With the help of her family and mentors, she has been able to travel all over the country performing and entertaining since she was 5 years old.

David (Anthony) Hernandez gained national attention with his powerful voice and affable personality as an American Idol finalist. He began acting and singing at age six, starring in musicals and performing with various theatre companies throughout Arizona. As a teenager David began writing original music and recording his material. A Phoenix native, Hernandez recently moved to Hollywood where he is writing new songs, working in the recording studio producing his newest music, and pursuing his passion for acting. He has already completed his first feature film as the lead in the movie “Synthetic Truth.” In addition to American Idol, David has showcased his talents on The Ellen Show, The Today Show, MTV’s TRL, EXTRA, Entertainment Tonight, Access Hollywood, Teen Choice Awards, TV Guides’ Sexiest Stars 2008, Idol Tonight, Idol Gives Back, and FOX-TV. He was asked to sing at the Inaugural KickOff Celebration ball for President Barack Obama, has performed regularly at Barcelona, an exclusive restaurant/show club in Scottsdale, Arizona. He recently traveled throughout the United States, singing for more than 250,000 fans as the star of a twenty-four city tour entitled “Idols at Christmas.”

Tickets are available now at celebritydoodles.com.