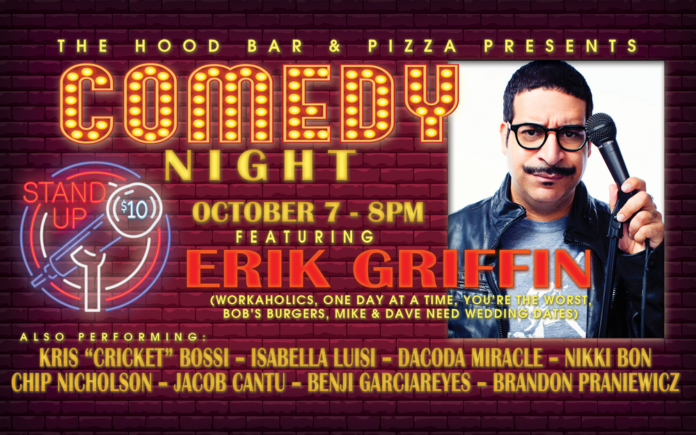 Performing at The Hood Bar & Pizza on October 7th @ 8pm Tickets are $10.00 and include a beer, wine, or well drink

Erik Griffin is not one to shy away from controversial statements. He tells a room full of giddy fans that, “Black Panther…it was just alright,” in his most recent one-hour Showtime special, AmERIKan Warrior. Erik Griffin is many things: standup comic, movie actor, series regular on several TV shows, but above all else…he is undeniably funny. After quitting his job in 2003 to pursue comedy full-time, Griffin’s trademark moustache and hilarious takes on anything from Beyonce, to protesting, to white guilt, have been tickling comedy-lovers’ funny bones ever since. Although he is most recognized for his role as hilariously irritable Montez Walker on the popular Comedy Central show, Workaholics, he has most recently starred in the Showtime series I’m Dying Up Here, has made two one-hour comedy specials (also on Showtime) The Ugly Truth and AmERIKan Warrior in the past two years, and has acted in several other TV shows and movies that he’s currently filming or are in post-production, as well as being a nationally touring comedian who headlines comedy clubs and colleges nearly every weekend. It begs the question of whether he has any downtime and I know there is a Workaholics joke just dying to be made right now, because Griffin does seem to be, in fact, a workaholic. I spoke with Erik ahead of his Sunday, October 7 show at The Hood and asked all the important questions.

CVW: How did you work up the courage to stand in front of people and be funny? What if you have a terrible day and then you have to go on stage and make people laugh? 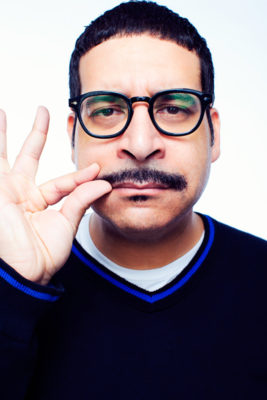 EG: “This happens all the time. I remember I was dating someone and right before I was going on stage she texts me, ‘It’s over.’ Then I hear them announce my name and I had to go up and be funny. It’s part of the job and often times I use those emotions to drive the point of view. It’s challenging, but worth the payoff of people enjoying themselves.”

CVW: When I go to a comedy show, I cringe when some drunk person in the audience thinks they’re part of the show. The more popular and well-known that you’ve gotten, do you find hecklers aren’t much of an issue? How have you handled them in the past?

EG: “Most clubs require a drink minimum and then we turn around and asked them to behave. It’s an ironic and challenging dynamic. I’ve dealt with a few in my time. You have to try and keep control of your emotions and make the situation fun for everyone else. I don’t always succeed.”

CVW: In AmERIKan Warrior, I thought your bits on current events were really funny, without getting too angry and ranting. Do you try to stay away from having serious political content?

EG: “No, I go in as much as I can if the subject moves me. I think my gift as a comic is that my point of view comes from a fun and honest place. The audience is laughing at how I talk about a subject, not necessarily the stance I’m taking.”

CVW: Recently, The Hood (where you’ll be on October 7) has been developing a culture for comedy in the Coachella Valley, so aspiring comedians can get comfortable up on stage. Can you tell a story about your own experience that might be helpful to young comedians starting out and wanting to hone their craft? 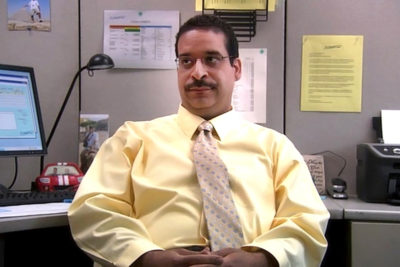 EG: “My best advice to comedians is always people don’t fail they quit. Persistence is the only way to hone this craft. You have to keep experimenting with your skill set because the audience and circumstances will be ever changing. I have jokes about gun control and opinions about shootings and one day a group of girls were in the crowd that went to a school that had a shooting. They had a very strong reaction. You can shy away from tougher subjects but you just have to know not everyone will find humor in what you are talking about.”

Whether you’re a fan of Griffin’s through his much-loved role as Montez from Workaholics, his comedy specials, his scene-stealing characters on cult-favorite shows like Arrested Development, or blockbusters such as Mike and Dave Need Wedding Dates, you will be laughing from the moment you sit down for his set at The Hood and long after he walks off the stage.