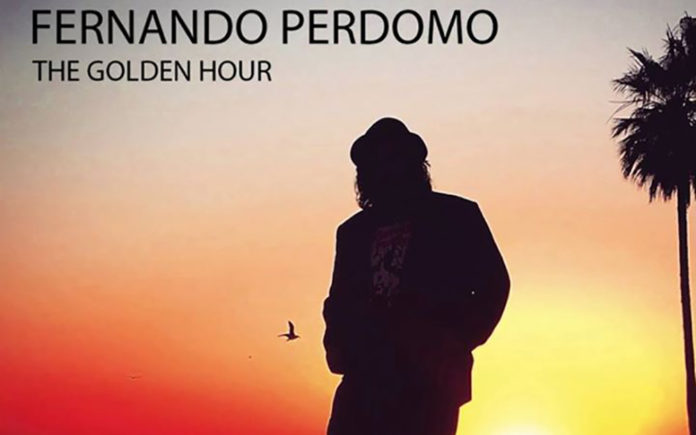 If it were possible for Harry Nilsson, Todd Rundgren and Electric Light Orchestra maestro Jeff Lynne to have a musical love child, his name would be Fernando Perdomo. Although the singer/songwriter/multi-instrumentalist/producer’s music sounds as though it sprang to life in the verdant California canyons of Laurel and Topanga, Fernando was born and raised in Miami Beach, Florida.

He took to music at an early age and fed a vinyl addiction by haunting thrift shops and flea markets. At Miami Senior High School he was part of the prestigious Classical Guitar Ensemble and Rock Ensemble, learning his craft through the stewardship of Doug Burris. Pretty soon he was sneaking out of the house to play in local Miami clubs.

He cycled through bands with names like Avenging Lawnmowers Of Justice, Sixo and Trophy Wife. In 1999, at the age of 19, his guitar work was featured in a nationwide ad for Pier One Imports. Around this time he formed a lasting friendship and musical partnership with Chris Price. The pair, along with Roger Houdaille, formed the band Dreaming In Stereo.

For several years he earned his keep as a musician for hire, playing recording sessions and touring with established bands. Finally he landed a permanent spot as guitarist for Brit-Pop favorites, Ed Hale and Transcendence. He recorded several albums with them and this led to work with Hear Music recording artist Hilary McCrae and ‘70s music legend, Andy Pratt. In 2009 he and Ed Hale resurrected the Dreaming In Stereo band moniker and released three singles and three full length albums in the span of three years.

2012 proved to be a watershed year for Fernando, he recorded a solo debut EP, Home Is Wherever You Are, and relocated to Los Angeles. It was there he opened his own recording facility, Reseda Ranch Studios. His first project was co-producing Linda Perhacs’ long-awaited, (44 years!) second album with old compadre Chris Price.

From there he was off and running, collaborating with acclaimed artists like Todd Rundgren, Fiona Apple, Jakob Dylan, Sam (of Sam & Dave) Moore, Emitt Rhodes and Cait Brennan. In between he found time to continue to record his own solo music, releasing three full-length efforts, Warm, Picks and Voyeurs, plus myriad singles and EPs. Fresh off producing Cait Brennan’s excellent Third album, he is just releasing his fourth long-player, The Golden Hour.

The album opens with a majestic piano interlude entitled “Sunset (Intro).” Brief, but sumptuous, it hints at Baroque pleasures to come before segueing into “Sleep.” Sweeping, gently weeping guitar, thrumming bass, multi-tracked vocals and a hand-clap beat propel this meandering tune. “I can’t wait to dream,” he confides “cuz you know it’s gonna be the only time I see you again.”

The theme of the record can be summed up by the song “Love Loss Repeat.” A minor key charmer, the title offers a pragmatic mantra for navigating the rocky shoals of love. As Fernando notes “nothing lasts forever, (nothing really does) nothing lasts forever, (especially love) and I am over this.” Layered backing vocals sigh like a languid Greek chorus. But a scabrous guitar solo undercuts his sanguine façade.

A pure Pop classicist, it’s clear that Fernando’s music takes its cues from the golden era of ‘60s and ‘70s A.M. radio. “Spotlight Smile” is wildly ambitious and complex, blending urgent guitars with propulsive rhythms. The sound ping-pongs between Beatlesque Pure Pop and ELO-ish Prog Rock with just a hint of Rockabilly. The lyrics enumerate the subtle charms of the magic girl with the dazzling spotlight smile.

The crunchy Power Pop of “The Light” is accented by a galloping backbeat and hard charging guitars. The infectious arrangement and instrumentation nearly camouflage lyrics that detail feelings of disquiet and ennui; “Stressing out can be a part of this, my routine can be hit or miss.”

“I Feel (Therefore I Am)” is pretty straightforward. Ricochet guitar riffs pinball through slippery synths as the rhythm gathers speed. The lyrics feel like an interior monologue that catalogues the human frailty we all experience. “I live, I love, I bled, enough..I make mistakes,” he concedes, (but) “I am in love no matter what.”

The action slows on a few tracks, “Look At The Moon,” “Here With Me,” “Sunset” and “When You’re Next To Me.” The inspiration for “Look At The Moon” came while Fernando was in the studio recording and his girlfriend called and insisted he go look at the moon. Distracted, he abandoned what he was working on and wrote the song from scratch. The languorous lunar love letter features interstellar guitar chords wrapped around twinkly keys. Jordan Zevon, (son of singer-songwriter nonpareil, Warren Zevon, and a talented musician in his own right), added the airy bridge.

On “Here With Me,” weepy pedal steel adds a high lonesome patina to the shimmery melody. Slightly dramatic lyrics; “If this was the last night of my life, it wouldn’t be a tragedy, because you’re here with me,” are leavened by celestial backing vocals.

“Sunset” picks up where “Sunset (Intro)” left off, quavery guitar chords and summery harmonies wash over over a gossamer melody. The lyrics pay homage to that legerdemain moment when day becomes night.

If Chicago (circa 1976), and The Raspberries ever collaborated, it might sound like “When You’re Next To Me.” Jangly acoustic guitar sidles between serrated shards of electric guitar, but honeyed harmonies undercut the melody’s heaviosity.

Other interesting songs include “Fine” and “The Golden “Hour.” The former pulsates to life anchored by whipsaw guitar and a staccato rhythm. The latter feels sylvan and ornate, powered by diminished piano chords, a tumbling backbeat and lushly layered vocals. Here Fernando promises “We’ll fall in love in the golden hour and melt away.”

The album closes with “Gold.” Something of a magnum opus, the arrangement slowly builds adding layers of instrumentation, whooshing synths, delicate acoustic guitar, astringent electric riffs and plangent keys. Throughout Fernando pleads “Take a chance on me, and I can make you happy…gold is hidden inside my soul.” It’s an ambitious end to a stellar record.