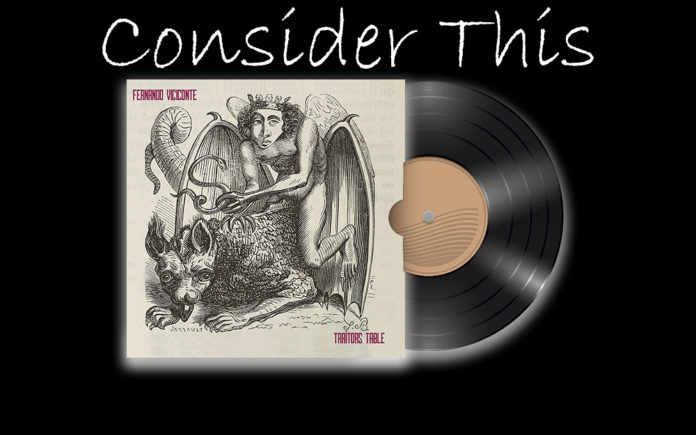 Fernando Viciconte isn’t a household name, but he really should be. He has had a thriving career as a solo artist for nearly 25 years. Heavy-hitters like Peter Buck, Scott McCaughey Richard Buckner and Don Dixon sing his praises. As do taste-making publications like Billboard, Magnet, Mojo, No Depression and Paste.

Fernando was born in Buenos Aires, Argentina and came to America with his parents and sister in the early ‘70s at the tender age of two. The family settled in the Pacoima section of the San Fernando Valley in Los Angeles. A neighborhood of Post-War housing that grew up around the burgeoning Aircraft industry, the population was largely African American and then Latino. Although his family wasn’t particularly musical, Fernando became obsessed around age five, after discovering Elvis Presley.

Before first grade rolled around, he quickly went from imitating the King, to learning guitar, to writing his own songs. He latched on to the Blues next, soaking up the suffering of Robert Johnson, Howlin’ Wolf and Muddy Waters. By the time he reached adolescence his obsessions had shifted once again and he dove headfirst into the more contemporaneous sounds of the Smiths, Echo & The Bunnymen and Bauhaus.

Answering an ad in the Recycler, Fernando connected with like-minded musicians, guitarist Joe De La Cruz, bassist Fabian Rawnsley and drummer Scott Van Schoick. Together, they became Monkey Paw. From the late ‘80s until 1993 the band gigged around Los Angeles, hitting seminal spots like Al’s Bar, English Acid, the Whisky A Go Go and Club Lingerie. Their melodic Hard Rock style created serious buzz and their fan base continued to grow. Several labels expressed interest and they came this close to a record deal before (amicably) calling it quits. A lone cassette remains their only official output.

Soon Fernando set off on a solo path. Solo in more ways than one, as he was reeling from a devastating divorce and trying to outrun some unhealthy addictions. Once he relocated to Portland, Oregon and conquered his demons, he got down to work. His debut, Season In Hell, arrived in 1996 through a newly minted deal with Cravedog Records. The album’s title felt wildly apropos as he succeeded in distilling his heartache, disappointments and addictions into a dour collection of Country Rock songs. After that, he hit the ground running. His sophomore effort, Widows arrived a year later and rocked a little harder, echoing his L.A. days. 1998’s Pacoima was a reflection of the music he absorbed as a kid in the Mexican American neighborhood where he grew up. Sung entirely in Spanish, it leaned hard on Tex-Mex, and Mexican R&B. He closed out the 20th century with Old Man Motel, a potent collection of driving Rock N Roll songs.

By 2001, Fernando parted ways with Cravedog and started his own label, Domingo Records. His fifth solo outing, Dreams Of The Sun And Sky was a watershed album; a deft combo-platter that incorporated his myriad influences. The album garnered rave reviews from the Oregonian, which included it in their year-end Top 10. Five years elapsed before he returned with Enter To Exit which received glowing notices from Billboard, Paste, Amplifier and No Depression. Ironically, Magnet magazine named him Best New Artist of 2006, even though he’d been a recording artist for at least a decade.

2010 saw the release of True Instigator which blended Americana, Latin and Country flavors. Not long after he signed with respected indie label, Fluff & Gravy Records and recorded Leave The Radio On, which featured contributions from Peter Buck and Scott McCaughey (R.E.M.) and  members of Richmond Fontaine and the Delines.

The last few years Fernando has been sidelined from live performance due an undiagnosed medical condition that turned out to be a Hiatal Hernia. Following surgery he was able to tour, opening for the Jayhawks and Mark Eitzel in between his own headliner sets. Despite his health issues, he continued to make music, most recently turning old pal Luther Russell, as he prepared to make a new album.

Although he mostly flies under the radar, Luther has been a driving force in the music industry since the late ‘80s. Dividing his time between Los Angeles and Portland, he toggles neatly between production work, his own solo career and as one half of Those Pretty Wrongs with legendary Big Star drummer, Jody Stephens. He served as producer for Fernando’s Pacoima album and now their newest collaboration has resulted in his ninth long-player, Traitor’s Table.

The opening track careens out the speakers with supersonic speed. “Division Lines” is a Proto-Punk anthem powered by a galloping rhythm, rumbling bass and rip-chord riffs. The lyrics offer a trenchant commentary on the country’s current divisive political climate, noting “Division lines have all been drawn, a cock fight among the pawns, unity viewed as a crime.” A wordless yowl toward the end signifies what Jimmy Carter once characterized as our nation’s crisis of confidence.

The next three songs offer a master class in concise songcraft. Sleek and uncluttered, “I Don’t Know” employs a New Romantic glaze that recalls David Bowie, the Smiths and the Psychedelic Furs. Rubbery bass lines ricochet off chiming guitars, a caffeinated beat and icy keys. Deeply personal lyrics reflect back on the immigrant experience; “I was brought here as a child, by no fault of my own/I was warned to keep my mouth shut, so no one would ever know.” A warm guitar solo on the break leans closer to George Harrison than Johnny Marr and muted organ notes fade to close.

“No Deal” executes a stylistic 180, as slashing power chords wash over sidewinder bass and a chunky backbeat. If Tom Petty’s “Last Dance With Mary Jane” and Buffalo Springfield’s “For What It’s Worth” had a baby, it might sound like this. Drafting off the political gravitas of the latter, the lyrics sketch a vivid “Manchurian Candidate” scenario featuring a dissatisfied political activist pushed to the unthinkable; “Give me your cruelty, this new reality no deal/Eliminate the candidate he’s not real.” Fernando’s sneering tone mirrors the violent threats that have become this country’s lingua franca; “The lying empty words, now the fate of the earth is sealed, armies are gathering, serving a wicked king, so kneel.” A scorched guitar solo on the break underscores the ever present enmity.

With its jaunty piano notes, thrumming bass lines, jangly guitar and kick drum heft, “The Company” wouldn’t seem out of place on the Zombies’ epochal “Odyssey And Oracle” album. Fernando’s winsome vocals buoy an already playful melody, belying lyrics that provide a running commentary aimed at entitled millennials. He gently mocks snowflake pretentions with just a few neatly turned phrases; “Are you thankful for the things you got, do you have a safe space for all your thoughts? Do you feel a little anxious without your pill? Did someone’s opinion break your will/Are you lonely without your friends, the stimuli on which you depend to keep you company?” Feathery guitar licks lattice over plangent piano as the tune shudders to a stop.

The action (sorta) slows on three tracks. Hushed acoustic arpeggios and softly subdued vocals serve the Folk-flavored melody of “These Are The Days.” The arrangement splits difference between the Elizabethan Folk of Nick Drake and Fairport Convention and the baroquely subversive sounds of “Aftermath” era Rolling Stones. But the lyrics offer a scathing assessment of the current Cheeto-In-Chief; “Falsifier, heretic, creator of the great trick, now it’s time has come….these are the days when God looks away as the beast is unleashed, as the world is set aflame.” Apocalyptic end times have never sounded so pretty.

Finger-picked filigrees and tremulous vocals open “Is This Normal?” they are quickly supplanted by a thunder-y beat and whoosh keys. Not-so-subtle lyrics double down, playing yet another trump card. “Oh no, the devil’s on the high road, keeping his blade clean while begging to be seen/Oh no, where do we go? Caught between a nightmare and a bad dream.” Things become positively Beatlesque as an audio clip of an old Lysergic Acid test is folded into the mix.

Finally, “Thirsty Man” is a whispery lament that traverses more personal territory. Sweet acoustic riffs and circus-y keys cloak a lilting ode to Dolores, who was long-departed grandmother. Passing away just before Fernando’s family emigrated to America, she remains a spectral presence, just out of reach.

Melodically, both “The Longest Wait” and “Hey Darlene” seem to pay homage to influential antecedents. The former, also the first single, features a crackling backbeat that recalls the uncompromising meter Creedence Clearwater Revival utilized on “Fortunate Son.” It’s matched by serpentine guitar riffs that shimmer like a long-lost REM song. The sunny arrangement nearly camouflages sad-sack lyrics bemoaning some bad breaks; “Time moves at a glacial pace when you’re fighting for lost place, you’ve been extracted like a bad tooth, another version of the truth that you never seem to know about, because everybody shuts you out and puts you down.”

The latter echoes the happy/sad dynamic Big Star practically patented. Splayed electric riffs dovetail with ringing acoustic chords and shaky percussion. Lyrics sketch a brittle portrait of a marginalized couple undone by a community’s hipster ascendance and gentrification; “Pretty soon we settled down, now we’re just a couple of ghosts in this town, no one sees us now, no one can make us out.” A Jingle-Jangle 12-string guitar solo add a Byrdsy feel to the proceedings.

The album closes on an ambitious note with “Turned Away.” Initially, strummy acoustic guitar connects with shivery vocals, once again, cogent lyrics address the plight of the immigrant. This time directly; “You’re willing to bow your head, smile and serve, when you can’t even find a place for less than you’re worth/Compromise is the disguise you have worn, you were put in your place since the minute you were born.” As the tempo gathers speed, electric guitars are unleashed, quickly overloading the musical circuitry and ratcheting up the lyrical sturm und Drang. A feedback-y crescendo gives the song a crash landing.

Between them, Fernando and Luther played, well, everything: guitars, keys, percussion, drums, bass, more guitars and keys, plus backing vocals, and apparently voodoo, if we are to believe the liner notes. Traitors Table is a vibrant smorgasbord of styles and sounds, all in the service of richly nuanced lyrics. Here the personal and political intertwine and the results are electric.