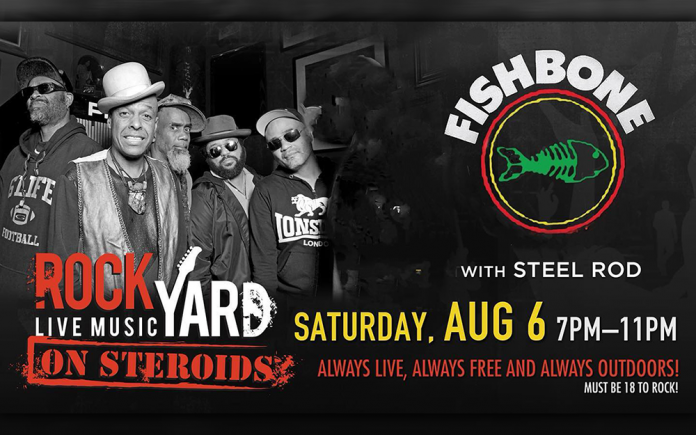 Fishbone is listed as an American rock band, but that description hardly encapsulates the vibe of this unique group that fuses ska, punk, funk, metal, reggae, and soul. They were once aptly described as “one of the most distinctive and eclectic alternative rock bands with sharp social commentary and a sizable cult following.” One of its founding members and Los Angeles native, Angelo Moore, spoke to CV Weekly ahead of their Saturday, August 6 show at Fantasy Spring’s Rock Yard.

Music, Moore tells me, is something he was born into. “Music was always playing in my home, there always some kind of jazz going on, R&B, funk, Motown…That’s what I would hear.” Moore’s father played saxophone and he himself started playing in 1980. His parents put him in band in junior high school and while he wanted to play I the synthesizer and make crazy outer space noises, he settled on the sax (with some nudging from his dad). Later, he spread his instrument expertise to drums, keys, and guitar. From playing the sax in the band to releasing their first album, Moore tells me the road to success was a steady one, and there wasn’t any immediate ‘aha’ moment. “1984 was when the first record came out. We were playing the club scene around L.A. before the record came out. Columbia (their label) put us more on the map, but we were still a little underground. And then it changed into Sony. We didn’t know the depth of what the record company could have in store for us. We realized there were racial issues in the music industry – people in high places only want the public to hear certain things – we realized what the record company could have had in store for us, but it was being blocked because of what we chose to put in our music. When you were black, you had certain genres dedicated to people of color – soul, reggae, hip hop. If you wanted to play outside of your lane, you got scrutiny and roadblocks.”

Moore’s artistry isn’t limited to music, he also has a collection at a gallery in Jacksonville, Florida (Gallery 725). Avant Presidents and Avant Icons are prints of different icons Moore embellishes with different poetry and phrases and designs. His subjects include the likes of Kennedy, Lincoln, Obama, Billie Holiday, Mel Brooks, Mr. T, Jimi Hendrix, and more.

What can Fishbone fans expect this weekend? Moore tells me, “They’re gonna get a full show. We’ve been opening up for George Clinton lately, but that’s just 20 minutes. But this show will be a full Fishbone show. If they don’t know what Fishbone is, it’s all soul-based funk and ska rock reggae and a little bit of jazz sprinkled in there.”

Don’t miss Fishbone this Saturday, August 6 at Fantasy Springs as part of their Rock Yard on Steroids lineup. Visit their website for more information: https://www.fantasyspringsresort.com/rock-yard/