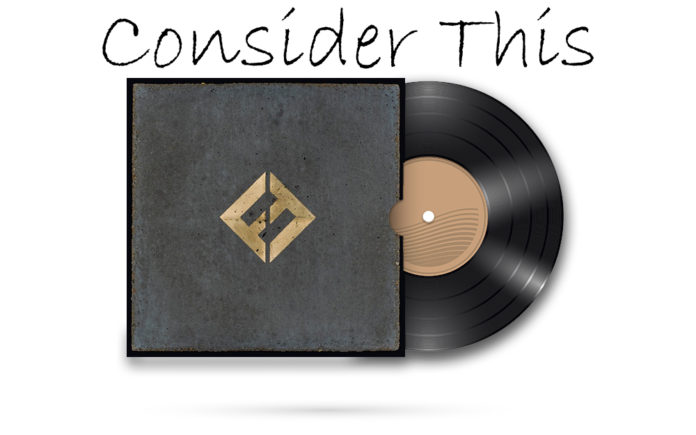 There’s a sticker on the new Foo Fighters record that offers this bit of humble-brag “Foo Fighters CONCRETE AND GOLD Testing The Limits Of Speakers Everywhere.” That isn’t an idle boast, this album can get LOUD. But that isn’t necessarily a good thing.

Nobody could have ever predicted that Dave Grohl’s career trajectory would have gone from gangly Punk Rocker to stolid Classic Rock/Dad Rock stalwart. Ironically, that’s exactly what happened.

Dave was born in early 1969 in Warren, Ohio. His mom, Virginia, was a school teacher, his dad, James, was a sportswriter. After a few years, the family, which included older sister Lisa, relocated to Springfield, Virginia.  When he was seven his parents divorced and his mother raised the kids on her own.

Dave gravitated to music early on. By age 12 he was playing guitar. When he and Lisa spent the summer with his cousin Tracy in Evanston, Illinois, she introduced him to Punk Rock. After a Naked Raygun show in Chicago, he became obsessed. Once he returned home, school work suffered and he began playing in local bands. He also became a habitué at Washington D.C.’s legendary 9:30 Club.

Dave played guitar in the Freaks, but had also begun teaching himself drums. When the Freaks’ bass player quit he stepped behind the kit and they changed their name to Mission Impossible, later they became Fast. When that came apart, he joined Post-Punk Hardcore band Dain Bramage. By this time, he had quit high school, much to his mother’s chagrin.

When Dave found out D.C. Punkers Scream were replacing their drummer, he auditioned. Claiming to be 20, (he was 17), he got the gig and embarked on a four year odyssey that included extensive touring and a couple of studio albums. When the band called it quits in 1990, Dave had already become acquainted with Kurt Cobain and Krist Novoselic, two thirds of the up-and-coming Seattle three-piece, Nirvana.

Along with drummer Chad Channing, the trio had recorded their debut, Bleach, which was released through the Northwest indie label Sub Pop. When Dave joined the fold they had just signed with DGC, an imprint from Geffen Records.

Kurt and Krist had already begun demo-ing tracks for their next album. Hooking up with Butch Vig, the trio left snowy Seattle and headed toward the smoggy sunshine of Los Angeles, (more specifically, deep into the San Fernando Valley), until they reached the hole-in-the-wall recording facilities of Sound City. They recorded their sophomore album, Nevermind, and the rest, as they say, was history.

Nirvana accidently spearheaded the Grunge movement, (Which included bands like Soundgarden, Pearl Jam and the Smashing Pumpkins), that exploded in early 1992. Surprisingly, the album sold millions, making reluctant superstars of three guys who, until recently were traveling by van and playing in dingy Punk clubs.

The pressure felt intense, especially for fragile front-man Kurt Cobain, who began self-medicating. In the span of two years Nirvana toured incessantly, released an outtakes compilation, Incesticide, a studio album, In Utero and recorded a live effort, MTV Unplugged In New York. But everything came crashing down In the Spring of 1994 when Kurt committed suicide.

Unable to face His demons, he sought relief at the end of a shotgun. Kurt left behind a cryptic note that referenced Neil Young, bewildered and bereft bandmates, a wife and infant daughter, and millions of grieving fans.

Obviously, Dave and Krist were devastated, both withdrew from the spotlight. Slowly and secretly Dave began to record his own compositions, playing all the instruments himself. A few months after Kurt’s death he popped up on “Saturday Night Live,” playing drums for Tom Petty & The Heartbreakers, and then disappeared again, retreating to the recording studio.

Nearly a year after Kurt Cobain’s death, Dave’s demos were creating quite a buzz. Nirvana’s old A&R rep, Gary Gersh had been named president of Capitol Records and persuaded Dave to sign with the venerable Hollywood label. Not wanting the album to signal the beginning of a solo career, he conscripted ex-Germs guitarist Pat Smear, plus bassist Nate Mandel and drummer William Goldsmith from the recently disbanded emo band, Sunny Day Real Estate. He christened the band Foo Fighters, a name that referred to the UFO and aerial phenomena Allied aircraft pilots spotted in World War II.

The Foo Fighters’ eponymous debut arrived in July 1995 and was well received. Extensive touring and heavy rotation on MTV guaranteed brisk sales. So-called “Modern Rock” ruled the airwaves in the mid ‘90s and Foo Fighters’ songs slotted in nicely between outliers PJ Harvey, second wave Punks like Green Day  and the watered-down Grunge of Candlebox. The album peaked at #23 on the Billboard Top 200 and garnered a Grammy nomination.

Ironically, it lost to Nirvana’s posthumous MTV Unplugged effort. Following that early success, Dave hit the ground running. His sophomore effort, The Colour And The Shape, was released in May of 1997, Dave sacked drummer William Goldsmith and pounded the skins himself. Taylor Hawkins took his permanent place behind the kit for the ensuing tour. The album hit #10 and Pat Smear amicably quit the band, citing exhaustion. His replacement was Dave’s old Scream-mate, guitarist, Franz Stahl.

For the last 20 years it’s felt like the Foos could do no wrong. They continued to rack up hit albums, There Is Nothing Left To Lose was recorded as a trio, (Franz Stahl had departed the band), and had a softer, more melodic flavor. Released in 1999, it won two Grammys. Chris Shifflet took over guitar duties and despite contentious recording sessions, 2002’s One By One was their most successful effort to date, hitting #3 and netting the Foos two more Grammy wins.

They changed it up in 2005 with In Your Honor, a double album that featured thrashy, electric Rock on one disc and quiescent acoustic music on the other. It featured appearances from Jazzy chanteuse Norah Jones, QOTSA front-man Josh Homme and legendary Led Zep bassist John Paul Jones. Two years later the band returned with a back-to-basics effort, Echoes, Patience, Silence & Grace, which won them their fifth Grammy.

Other studio albums included Wasting Light (which welcomed Pat Smear back into the fold) and Sonic Highways in 2011 and 2014, respectively. There’s been a live record, Skin And Bones and a greatest hits collection. In the midst of that frenzied activity, Dave managed to get married and start a family, record a Metal side project as Probot, drum occasionally for Queens Of The Stone Age and form Them Crooked Vultures, a super group comprised of QOTSA leader Josh Homme, legendary Led Zep bassist, John Paul Jones and multi-instrumentalist Alain Johannes.

In 2012, he took time to pay homage to the infamous hole-in-the-wall recording studio, Sound City, by making a documentary. He also created the limited HBO series Sonic Highways While on tour in 2015 he fell onstage and broke his leg. After honoring tour commitments (by performing from a makeshift throne), the band took some time off so he could concentrate on physical therapy. Dave’s plan was to stay away from music for 365 days. His resolve crumbled pretty quickly, and the result is the Foo Fighters’ ninth album, Concrete And Gold.

The record opens tentatively, with “T-Shirt.” Initially, Dave softly sings over somnambulant acoustic guitar, “I don’t want to be king, I just want to sing a love song, pretend there’s nothing wrong…” But it’s a classic bait-and-switch, as thundering instrumentation rolls in, swathed in layered vocals with all the subtly of premature ejaculation. It’s a bit like ELO on steroids, and it sets a pattern for the songs that follow.

Nearly 30 years ago, Nirvana popularized the quiet/loud dynamic that the Pixies pioneered. That paradigm has also served the Foos, and remains ever present on tracks like “Run” and “La Dee Da.” The former, which also serves as the first single, clocks in at over six minutes and contradicts s the theory of “less is more.” Twinkly acoustic fills and “woo-hooey” backing vocals give way to an insistent thumping beat that accelerates to bludgeoning proportions. Cyclonic guitars pivot between downstroke riff-age and buzz-saw power chords. Dave’s vocals take on a scratchy/screechy edge until the listener is pummeled into submission. What’s the song about? Um, maybe running away.

The latter doubles down on that formula, as tesla-coil guitar is supplanted by search-and-destroy bass lines and a bulldozer rhythm. Lyrics like “Hate if I want to, love who I like, hate if I want to Psychic Television and Death In June, Jim Jones painting in a blue bedroom,” tap into feelings of teenage angst that remain close to the surface. Oh yeah, more shriek-singing ensues.

The best tracks here jettison the Foos’ go-to grooves and dig a little deeper. “Dirty Water” blends sweet acoustic arpeggios with breezy vocals and sleek rhythms. A kinda-sorta love song, Dave tenderly croons “I feel an earthquake coming on, I feel the metal in my bones/I’m a natural disaster and you’re the morning after all my storms.” Inara George, (half of the Bird And The Bee), adds a distaff touch with some willowy backing vocals.

On “Happy Ever After (Zero Hour),” Dave and the boys seem to take a page from the melodic playbook of frequent collaborator and sometime band-mate Alain Johannes. Jaunty acoustic notes and a tiptoe-through-the-tulips lilt almost camouflage lyrics that hint at disillusionment and ennui.

Conversely, “The Line” is powered by ricochet riffs, boomerang bass, a wash of keys and scattershot drums that rain down like pieces of Skylab crashing to earth. The lyrics obliquely fight for a foundering relationship by championing honesty, even as they offer this rhetorical question; “What is truth but a dirty black cloud out of the blue.”

Other interesting songs include the menacing, Glam-tastic boogie of “Make It Right.”  Explicitly political, “The Sky Is A Neighborhood” weds a Cro-Magnon beat, skittery guitar and carnival keys to Beatlesque harmonies and a “We Will Rock You” crunch. Finally, “Arrows” floats on icy synths, a kinetic rhythm and sandblasted guitar. The album closes with the title track, an epic dirge of monster proportions.

Ironically, in an effort to expand the band’s horizons, Dave Grohl enlisted Greg Kurstin to produce this album. Not only is he the manly half of The Bird And The Bee, but Greg made his bones as part of Beck’s touring band. A multi-instrumentalist, he is probably best known for his work with Sia, Devo, Kelly Clarkson, Liam Gallagher and Adele. Even with the extra emphasis on synths and keys, (with the addition of ex-Wallflower Rami Jaffe, who is now a full-time Foo), this album retains a musky, masculine energy that cannot be diluted.

Concrete And Gold connects all the dots, it even debuted at #1 on the Billboard Top 200. But somehow, it still manages to miss the mark.