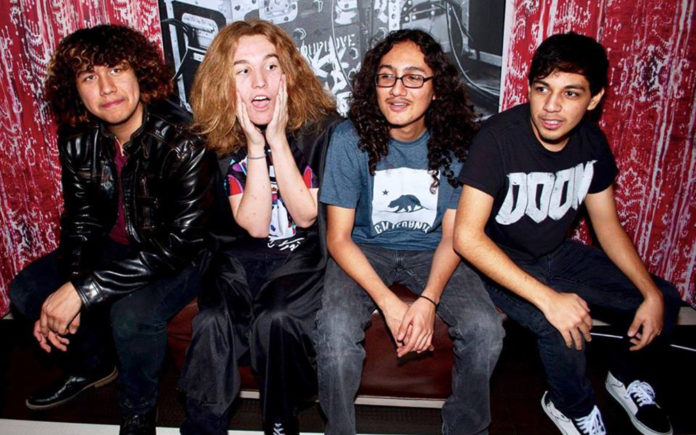 Even though FrankEatsTheFloor has only been a going concern for a couple of years, they have already accomplished a lot. Coachella natives Matt King (bass), Aleks Romo (guitar), Joseph Beltran (guitar) and Franky Altamirano (drums) began contemplating a musical collaboration when they all attended acting class at Coachella Valley High School in 2016.

Joe and Franky had already been playing together as the Power Strangers when they invited Matt to sit in. Although his bass skills were rudimentary, enthusiasm was contagious. Rather quickly Aleks was added to the line-up. Unfortunately, another Power Strangers already existed so the guys used a band-name generator and created the distinctive FrankEatsTheFloor moniker.

Inspired by the combustible energy of Iggy and the Stooges, the White Stripes and the Strokes, as well as absurdist humor of Lonely Island, they immediately started writing their own songs. Within a few months, they began booking gigs.

Since then, the four-piece has hit the ground running. They recorded their first EP, participated in Battle Of The Bands and the Tachevah competition. They’ve played local haunts like the Hood, Plan B, and the Hard Rock Hotel. Whether they’re playing a backyard concert or Pappy & Harriet’s, they bring the same level of wit, intensity and showmanship to each event. This Spring the guys were voted “Best Youth Band” at the the Coachella Valley Music Awards. FETF recently played a free show at the Record Alley, (apparently, their home away from home), to celebrate the release of their new EP, Floor It!

Some songs are bookended by tongue-in-cheek introductions and “public service announcements,” plus there’s a heartfelt and succinct maternal tribute here. Essentially, there are five full-length songs here. After the kaleidoscopic “Expectations Intro” the EP kicks into gear with “Ungrateful.” A pummeling backbeat connects with prickly guitar riffs and churning bass lines. Following the fractious overture, the instrumentation recedes slightly as Matt and Franky split vocal duties. The lyrics chart the brutal disappointment of dashed romantic expectations; “I’m guessing I was too nice, cause you did me wrong, and I’m such a goddamn mess, you really strung me along/Now it’s apparent to me I’m not worth your time, but it’s not like it matters to me, I’m doing just fine.” The tensile melody and danceable angst of the arrangement recalls the 20th century Post-Punk of Wire, Gang Of Four, Mission Of Burma and No Knife. 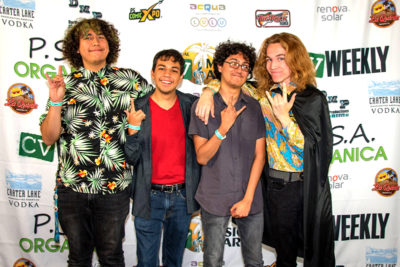 FETF executes a stylistic 180 with the Primordial stomp of “Hungry.” Fee-fi-fo-fum guitar notes crest over search-and-destroy bass and a kick-drum beat. Joe takes the lead here, his voice adopting a feral menace as he searches for sustenance. Things get positively anthropophagus, “Wait a minute, I smell something nice…stop your running it won’t do you no good, you’re my prey just like you should/Don’t look now (I’m right behind you), I’ll eat your face (and chew it too) better get ready (I’m after you).” On the break guitars spark and pinwheel with minacious grace. Probably a good idea to make sure these guys have plenty of Snickers bars on hand during band practice.

“Don’t Eat Instruments” is positively Dadaesque. Matt is up front for this one. Taking a page from Paul Simon’s nursery rhyme-tastic “50 Ways To Leave Your Lover,” the lyrics offer a cautionary tale on ingesting, um, instruments. Fuzzy guitars collide with popping bass lines and a pile-driving beat. Sure, it’s slightly silly, but in the tradition of Frank Zappa, Devo and Primus, there’s a subversive subtext at the core of the song.

The howly Santa Ana winds that open “Sand Dunes” are quickly eclipsed by prowling bass lines, a tick-tock rhythm and strafing guitar riffs. Joe and Franky trade verses that equate relationship struggles with a desolate desert landscape. The tempo accelerates on the urgent chorus; “Sand dunes, I’m tryna get through to you/What am I gonna do with these Sand dunes.” There’s a power and economy to this track that recalls the quiet tenacity of bands like Oysterhead, Rush and the Police.

The EP closes with “Avenida,” a propulsive instrumental that weds stripped-down guitar and wily bass runs to a whip-crack rhythm. It’s the kind of exultant melody that should play over the end credits of a smart-ass teen comedy.

Probably at this point FETF is a little weary of the focus zeroing in on their relative youth. That novelty will certainly recede as they gain more experience and their music continues to evolve. But for now, in the immortal words of Pete Townshend, The Kids are Alright.