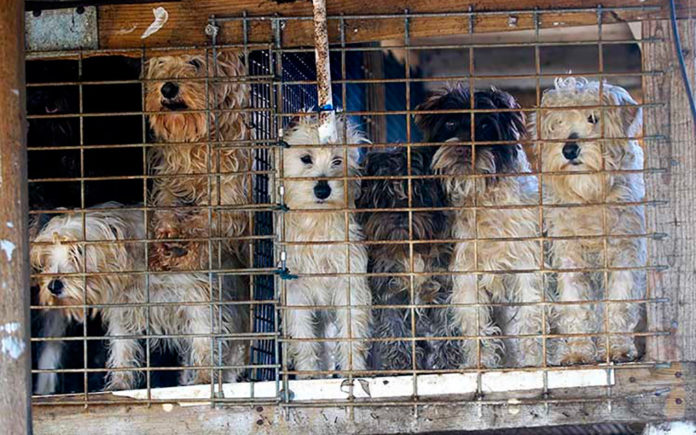 His feet were sore and swollen from standing on the wire mesh of his cage in the sweltering garage. The dog could barely stand up in the small enclosure, and his legs cramped in pain. The stench was overwhelming. Sometimes waste products from the cage on top would drop into his enclosure. The dogs in the garage never saw the sun, the moon, the clouds, smelled flowers, felt the rain, or the soft feel of grass under their feet. They never had toys, never played with other dogs, and never knew the loving touch of a human. Some days they weren’t provided any food. In the summer, the heat was overwhelming, and he smelled death in some of the kennels. His coat was never groomed, and his fur matted into dreadlocks that formed a helmet enclosure encasing his body. The days turned into years, and he was frozen from the endless suffering.

Then one day the garage door opened, and a group of humans in uniforms took the dogs away in large trucks. In the summer of 2016, 70 Shih Tzu dogs were discovered during this raid against an unlicensed and illegal puppy mill in the high desert. The animals were in horrible condition, some emaciated others sick with disease. Kept for breeding, the greed for higher profits means little or no care for the animals. The black and white dog that became known as Frankie and another dog was taken by a good Samaritan to Loving All Animals, an animal welfare organization in Palm Desert. 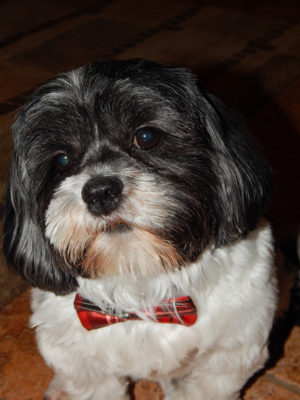 Frankie entered a foster home with Joyce Smith and her dog Curley. His luck continued when he was adopted by Linda Williams and Kim Bledsoe. Linda and Kim previously adopted a “special needs” pup named Willow with one eye from Loving All Animals, and were up to the challenge of helping this puppy mill survivor. Linda wrote the following beautiful tribute about Frankie:

I contacted Loving All Animals looking to become a foster mom for a Shih Tzu. About a week later, Frankie came into my life. He is a puppy mill survivor. He lived his entire life (3 years) in a small cage inside a garage with 70 other dogs. Frankie was one of the last two dogs to be rescued. I was told the last 2 or 3 dogs from a puppy mill are the hardest to find a home because of their lack of socialization and their fear of people from living in such horrible conditions. I prayed I was up to the challenge.

And so our journey began. It took me 5 days to get Frankie to walk. He was like a sitting statue. He slept sitting with his head drooping. We spent many hours together in the backyard trying to learn to be a dog. Every day I pushed him in a pet stroller around the neighborhood to introduce him to the world. Every sound, every sight was a new experience; lawn mowers, leaf blowers, cars, stairs, people talking, etc., were all frightening.

In the third week, we began training classes at the rescue center. I told the trainer, Sandy Miller, about Frankie’s past. Sandy looked at me and said “Linda, do you know what you are in for? This could take time.” Her words scared me, but then I thought I can’t be more scared than Frankie. I had to try. Frankie deserved a chance at a good life. Sandy advised me to take baby steps. Any harsh tones or reprimands would cause him to shut down.

The first 2 classes were hard for him and me. But right before the third class, a miracle happened. Late one night, Frankie was having a bad dream. I woke him up. He immediately ran to me and placed his front legs around my neck giving me a hug I will never forget. At that moment, I knew I was no longer a foster Mom. I was his Mom. He trusted me.

Weeks later, we graduated from our class. Frankie learned to sit, lay down, to stay, walk on a leash and to come to me. The latter was his best command.

I signed the adoption papers. Frankie has found his place in our home. He is always by my side. He now sleeps in his bed. He also loves our king size bed. He prances as we walk the neighborhood. His eyes say “I love my hood.” We are learning to mingle at the local dog park. He still has a cowering fear of strangers, but I know he will overcome.

Frankie indeed had a hard start in life. He has my promise it will have a happy ending.

Today, the state of California stands ready to pass a bill that will help reduce the suffering of dogs like Frankie, and help save the thousands of dogs euthanized in California shelters. Assembly Bill 485 by Assemblyman Patrick O’Donnell passed several hurdles in the legislature, and is coming up for a vote in the full Senate. Since the majority of puppies sold in commercial pet stores come from large scale breeding facilities providing little care for the animals, the bill will ban the retail sale of dogs and cats, and only permit pet store to feature animals from shelters and rescues. If he could talk, Frankie would say, “Stop the suffering of my canine buddies in puppy mills. Call your State Senator and tell them to vote YES on AB 485!”