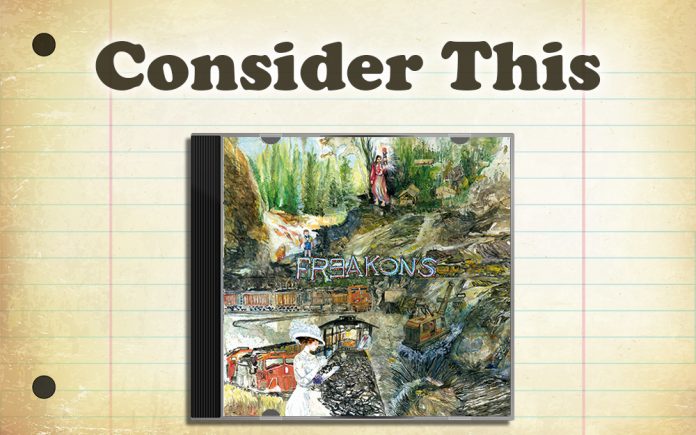 It’s tempting to think that when Rapper Missy Elliott released her smash single “Get Ur Freak On,” 20 years ago, she was envisioning the inevitable collaboration between Freakwater and The Mekons. Well….maybe not.

Both bands have been pals for decades, each has a rich and storied history. Tongue firmly planted in cheek, legendary critic Lester Bangs labelled The Mekons “The most revolutionary group in the history of Rock & Roll.” But that declaration has proven to be deadly accurate. At once uncompromising, witty, profoundly cynical and creatively restless, they’ve confidently hopscotched through a plethora of musical genres since their inception in 1976. Since then, the Leeds eight-piece has released 24 studio albums. Vocalist Sally Timms and vocalist/multi-instrumentalist Jon Langford are the two band members that have partnered with Freakwater. 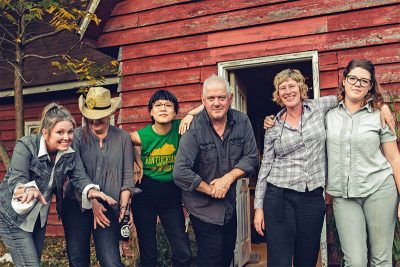 Janet Beveridge Bean and Catherine Irwin formed Freakwater in 1991 and almost immediately won over fans and critics alike, securing a spot in the alt.country/Americana firmament. Their absonant harmonies and bare-bones instrumentation has been favorably compared to Country/Folk progenitors like The Carter Family and The Louvin Brothers. The Louisville duo has released seven albums. On paper, a match-up between British Punk-Polymaths and Appalachian agrarians might not make sense. But once the needle drops on the first cut, everything falls into place. The album opens with a bit of studio chatter that evolves into tight sororal harmonizing between Janet, Catherine and Sally on the phrase “Dick Cavett New York, 1980,” until Jon pops up, snarkily compares their vocalese to (venerable French Jazz vocal ensemble) The Swingle Singers, adds a sly joke about the phallic-centric slang of “dick,” and adds his raspy tenor to the mix. Strummy, downstroke acoustic guitars partner with slashing electric riffs, swooping violin and a finger-snapping beat. Lyrical inspiration comes from an interview Dick Cavett conducted with Richard Burton, as the Welsh actor notes he was the first in his family not to make a living in a coal mine. As vocals crest atop sylvan strings, lyrics immediately illustrate the brotherhood between neighboring nations who risk their lives underground; “Beneath the Bay Of Biscay, into Wales from Basque Country, out under the Atlantic, to Pennsylvania and Kentucky/The great Atlantic fault that all miners share, the gorgeous glistening seam, black as Cleopatra’s hair.”

The plight of the miner is the loose theme that threads through this album, connecting the dots between Appalachia, England and Wales, in support for the non-profit organization, Kentuckians For The Commonwealth. Both “Abernant 84/85” and “Never Thought I’d See The Day” focus on the fallout from the 1984 Miners’ Strike in Great Britain. The former, recalibrated from the original (featured on The Mekons’ seminal Fear And Whiskey album), is equal parts Sea Shanty and Celtic lament. Violins shiver, dobro, melodica and guitars shimmer, fastened to a thunking box drum beat in 3/4 time. The buoyant melody and arrangement nearly succeed in camouflaging a miner’s anguish and despair; “The wind and rain beat down on his fair head, as he stood in the darkness wishing he was dead/Only 17 when he went down in the mine, and it’s been a year since he’s been out on the line.”

The latter finds a miner forging a different path. Ascending acoustic chords intertwine with wily electric riffs and mournful violins on this melancholy weeper. Jon takes the lead here, seamlessly slipping into the skin of a bereft miner whose post-strike existence has become more tenuous; “Before they voted to go back, I left my wife and moved to Brixton, I broke some bloody student’s nose, called us traitors, called us quitters/I did my time I did not stay, I’m growing pot in Martin County, they blew the mountaintop away, never thought I’d see the day.”

Three songs written by the Freakwater kids employ a more circuitous route when taking the coal industry to task. “Judy Belle Thompson” is a lean and rangy homage to Judy Belle Thompson Bonds, an indefatigable activist for Coal Miners’ rights, who died to soon (from Bone Cancer), at only 58 years old. The modal melody, powered by driving acoustic notes, serpentine electric guitar and violins that quaver and flutter, shares some musical DNA with Bob Dylan’s epochal “Masters Of War.” Raw and primal, Catherine and Janet’s vocals lock into their patented dissonant harmony as they lift their voices to praise a fearless warrior; “Judy Belle Thompson woke up that day, from neighbor nor power she would not give sway, her voice loud and clear, her aim pure and true, Judy Belle Thompson told Massey you’re through with keeping us down with your crown made of coal, and burying us under our own poisoned soil.”

The opening guitar chords of “Chestnut Blight” echo Jackson Browne’s wistful “These Days,” but they’re quickly supplanted by see-sawing violins and jangly acoustic licks. Lyrics link tree rot and other signs of ecological distress to the havoc wreaked by coal mining; “Now the water in the well’s not clean to drink, it burns like acid and it’s blacker than a lawyer’s ink, Jesus walked on water in bible, but now the creek’s so filled with slag, even I won’t sink.” The jaunty melody and chirpy, sing-songy vocals can’t ameliorate the cold hard facts; “When the last hunk of coal has been mined, we’ll be judged by the deeds we’ve done not the deeds we signed, when there’s nothing in these hills left to steal, we can buy it all back from the bank at a real good deal.”

Although “Phoebe Snow” is named for the fictious spokesmodel created at the turn of the 20th century, to tout the relative cleanliness of coal train travel, Freakons use that as a jumping-off point to rail (see what I did there?) against duplicitous advertising and the coal industry’s false promises. Catherine and Janet’s symbiotic disharmony washes over Sally’s luminous trill, stacks of acoustic guitars, plaintive fiddle and skronky electric guitars. Edifying lyrics debate the efficacy of the Lackawanna train lines burning anthracite coal rather than bituminous; “Oh tower man of Buffalo with your levers bright, will you besmirch my gloves of white? No, baby no, upon the road of anthracite we will ride, ride, ride tonight.”

The balance of the album is populated with telling covers. The Freakons acquit themselves beautifully with a shimmering take on Hazel Dickens’ “The Mannington Mining Disaster.” The arrangement on the Traditional “Blackleg Miner” splits the difference between Folky and modal. Written by Matthew McGinn, “Coorie Doon” is alternately airy and mournful. Meanwhile, “Dreadful Memories” by Sarah Ogan Gunning is reconfigured as a Anglican/Appalachian lament, underscoring the synergistic connection between these British and American compatriots.

The album closes with a Jon Langford original, “Blue Scars Of A Miner.” Defiant and elegiac in equal measure, the buzzy, static-y instrumentation is matched by a thorny narrative that asks, “is there life after coal?” Told from the POV of a former miner, lyrics like “Is there anything but drink, drugs and last reminders, a single teardrop rolling down, the blue skies of a miner,” cut to the quick. The final verse is simply heart-rending; “Now I’ll lay me down to die, let the darkness bind us, what I earned, I earned for you, the blue scars of a miner.” It’s a brittle post-mortem to an intriguing album.

While Jon, Sally, Janet and Catherine provided lead and backing vocals, as well as acoustic guitars, they were aided and abetted by violinists Jean Cook and Anna Krippenstapel, along with bassist John Abbey guitarist-extraordinaire James Elkginton on dobro and electric guitar.

Hopefully, this is more than a one-off. While both bands thrive in their respective niches, it’s clear from this self-titled debut that their shared sensibility has resulted in an undeniable musical alchemy.