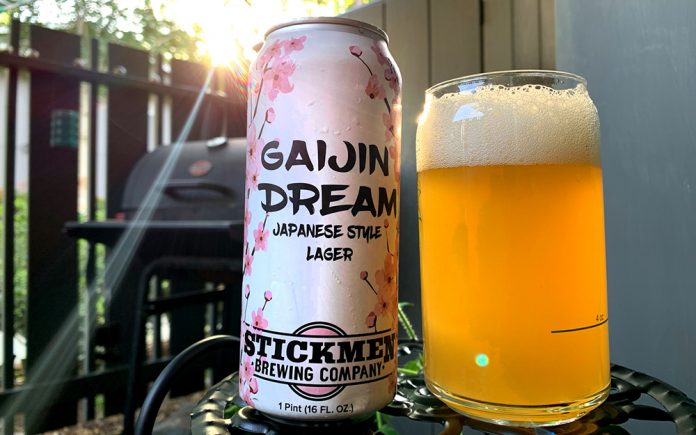 Can you remember the last time a beer blew your mind? Maybe it was your first barleywine, with those intensely deep and vinous flavors. Hazy IPAs definitely blew people away when they first appeared on the scene; looking like a tall glass of calcium enriched orange juice and smelling like the whole damn exotic fruit section at Whole Foods. With their thick mouthfeel and candylike flavors, heavily-fruited sour ales were a game-changer for many novice beer drinkers who liked their brewski to be more Mai Tai than Maibock. If we go all the way back to 1996, Stone’s Pale Ale was a game changer in San Diego, taking what was once thought of as a tepid style of beer, and bittering it to the point of aggression. What blows your mind depends on your individual palate, but what every game changer has in common is subverting your expectations and making you go “WOW”.

A beer doesn’t have to be big and imposing to make an impression, sometimes all it has to do is interpret the rules differently. Mexican lagers were once considered the slightly spicy cousin of the boring ass American lager; yellow, fizzy, tastes like crap once it’s warm, made in massive batches with the cheapest ingredients possible. Once artisan craft breweries saw that there was a market for Mexican lagers, they took that style to the next level. The standout version comes from Alesmith, with their Sublime themed Mexican lager that tastes like if Fritos were a beer. By taking corn, an ingredient found in almost all north-American lagers, and adding so much of it that it offsets the flavor profile and tastes overwhelmingly like toasted corn nuts, Alesmith created a product that stands out among a slew of similar tasting competitors. While there are detractors who don’t like the extreme flavor tilt, it doesn’t change the idea that Sublime’s Mexican lager took a taste that we were all familiar with, and turned it on its head. 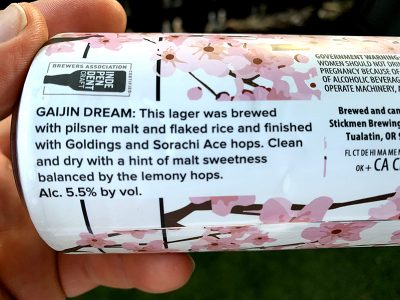 Oregon’s Stickmen Brewing Company elevated one ingredient typical of a style, and did the exact same thing with their Japanese lager, Gaijin Dream. The Sorachi Ace hop was developed in Hokkaidō, Japan for Sapporo Breweries in the late 1970s, and is known for having one of the most unique flavor profiles in all of hops. While flavors of dill, coriander, white flower and tea can be common, it’s the intensely lemony flavors of Sorachi Ace that make Gaijin Dream taste like no other Japanese lager on the market.

APPEARANCE: For over a hundred years, beer makers used their ability to clarify a beer as a selling point. The Miller Brewing Company even used the tagline, “the champagne of beers” to describe the bright and bubbly character of their product. A cloudy, murky beer no longer symbolizes a lazy beer or inferior brew, now it just means flavor. Gaijin Dream is as opaque and cloudy as the thickest hefeweizen you’ve ever seen, thanks to the ability of rice to cause protein haze. While Japanese lagers are usually as brilliant and clear as their American counterparts, Gaijin Dream goes the opposite direction. 4.5/5

NOSE: Twangy, herbal, and slightly metallic. The famed “dill” notes of Sorachi Ace are big in the nose, with the grainy sweetness of rice behind it. 4/5

TASTE: With the tartness level of a Gose, it’s hard to imagine that this beer doesn’t contain an acidic fruit puree in it, but Gaijin Dream gets all of its intense flavor from its hops. Yuzu or Meyer lemon like up front, this isn’t the kinds of hop flavor that you find in an IPA. Right behind the intense citrus notes is a starchy sweetness that only rice gives. A stern bitterness keeps the beer from being sugary, and it ends on a crisp, dry, almost astringent note. 4.5/5

MOUTHFEEL: Medium, which is surprisingly full for a lager. The carbonation level is appropriate without being high, and adds to the impression of fullness to this beer. 4/5

OVERALL: Look for Japanese lagers to be one of the next styles that craft brewers take from niche to mainstream, and for many breweries to infuse their versions with fruit to add appeal. Gaijin Dream will remain as an excellent, early version of the style that took everything you thought you knew about Japanese lagers, and turned it on its head.