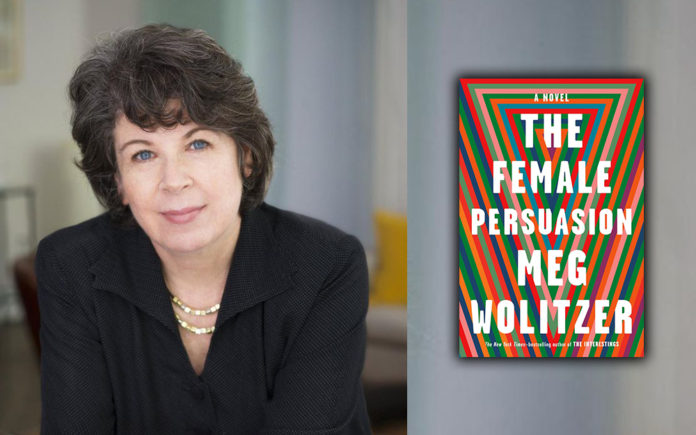 A study has concluded that women will not earn equal pay for another one hundred years!  When will woman truly have equal rights? What about maintaining the right of women to choose and have access to safe reproductive health? Meg Wolitzer’s The Female Persuasion (Riverhead Books, 456 pages) looks to the next generation for answers.

The story begins with college freshman Greer Kadetsky who finds herself disenchanted with her classes, friends and future, until she attends a talk by a famous feminist name Faith Frank.  Frank was once the charismatic leader of the women’s movement.  She was at the forefront of a woman’s right to choose, women’s roles in the work place and first to publish a magazine for working women.

When Frank shares her story, Greer is inspired and suddenly has a purpose.  She wants to make a difference in the world, and be like Frank.  After the event, Greer tracks down Frank and shares her enthusiasm.  She and Frank connect.  Frank extends an invitation to reach out to her anytime.

After graduation, Greer does exactly that and she lands a job with Frank at a newly formed foundation called “Loci.”  The purpose of the organization is to further women’s issues and help women in need around the world.

Meanwhile, Greer’s high school sweetheart graduates Princeton, and takes a job with an investment firm in the Philippines.  The two have had plans to live together since parting ways for college.  With their careers on track, it looks like they will once again be united and have all their dreams come true.

But after an horrific event, the lovebirds drift apart.  Soon, Loci’s luster wares off and Greer discovers the foundation has covered up a lie.  Greer is outraged and confronts Frank about it, who denies knowing anything.  It may be true she is ignorant of the incident, but she also refuses to come clean.  Frank will not destroy the foundation that still does some good because of one mistake.

Greer and Frank part ways after Frank humiliates Greer in front of co-workers.  Greer realizes Frank is not perfect, her integrity is limited, she fears the future and will compromise her values.  Something Greer is not prepared to do, so she quits her job.

Eventually, Greer and her boyfriend get back together and they both find the success and happiness they always dreamed of.

The Female Persuasion is by no means a feminist manifesto.  But rather, it explores the relationship of two women, one who started the most significant movement against the patriarchal, puritanical white male establishment, and one who is benefits from it.  Frank and her followers made a difference!  They changed the way women were treated and seen in the workforce.  They gave women a voice and presence they did not previously have.

The story is set when Obama was in office and ends with today’s administration.  The men and women in the story are concerned about women’s rights and the changing environment, which seems to be turning back women’s rights rather than moving women and their issues forward.

Author Wolitzer provides terrific insight into the women and their personal lives, hopes and ambitions.  With all they have in common, the difference is now the wide divide of a new generation.  Will millennials continue to carry on the fight for women?  Will they make a difference in the world?  Are there real opportunities for millennials to change the way things are done?

The book starts strong as Greer rises above her circumstances and manages to balance a dysfunctional family, a boyfriend and college life.

I liked the character of Frank and it was fun to discover that when she was young and ambitious, finding her calling just happened.  Yes, she wanted a better shot for women at education, jobs and careers, but mostly she fell into the leadership position because of her natural charm, good looks and great speaking voice.  Nonetheless, Frank helped shape feminism as a movement.

There are plenty of interesting facts and observations woven into this story about the odds stacked against women.  Since women earn less than men, women have twice the debt men have since they don’t have the earning power to pay down their student loans.  There is also a crazy conversation about how some women are driven to destroy other women.

The story doesn’t finish as strong as it starts, yet the theme is important. How much persuasion will women exert on lawmakers? Who will continue to fight for women? How will women keep or gain more power?