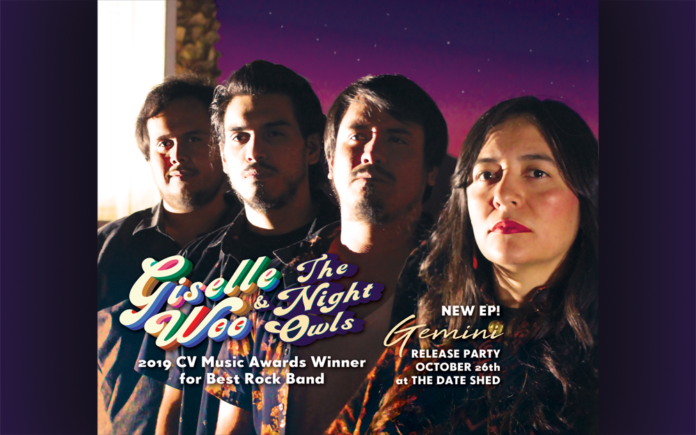 Chosen by the voters, the 2019 CVMA for ‘Best Rock Band’ went to Giselle Woo and The Night Owls. Let’s put it in perspective. The category included the ‘little black book’ of rock acts including John Garcia and the Band of Gold, Blasting Echo, Sleazy Cortez, Mega Sun, The Hellions, Death in Pretty Wrapping, Black Water Gospel and The Classy Mother Fuckers.

The truth is, Giselle Woo and The Night Owls rock just as hard as any of those bands! If you know her history with The Owls, you know she has only had the best surrounding her. World-class performers like David Macias (Machin’), Andy Gorrill (KARR), Erik Mouness (Braun Fraulein) and Brandon Ray Henderson (The Woodys) have flown high as Owls.

The current line-up takes that history and soars even higher. With Woo (vocals, rhythm guitar), Christian Colin (lead guitar), Marco Murrieta (bass guitar) and Jose Ceja (drums), the band is at a point of enlightenment, reaching heights never before achieved. Their newest song states in its lyrics, “tenemos la dicha de ser quienes somos,” or, “we are blessed to be who we are.” Blessed they are and Woo continually lifts her band up. 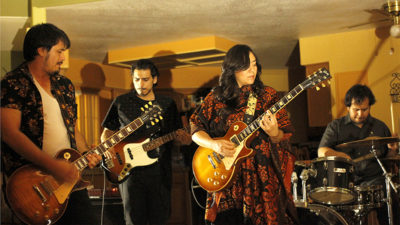 The Night Owls are solidified and were hand-picked by Woo. She shared about 2019 CVMA ‘Best Guitar’ nominee Colin, “Christian is like a walking encyclopedia, he’s super smart. Anything he puts his mind to; he does and strives to be the best at it.” Woo jokes about the inclusion of Ceja, who happens to be a Berklee College of Music alum, “Jose is really good at playing video games. He’s a good teacher, too!” Finally, she appreciates Murrieta’s all-around skills, “Marco is a super talented guitar player, he’s very modest about it. I love jamming out riffs with him, he’s also a model.” Woo is excited to see how far the band can push themselves. “On top of all this awesomeness, jamming with them just feels right.”

Earlier in the year Giselle Woo and the Night Owls won the 2019 CV Music Showcase at The Hood Bar & Pizza and were chosen by Goldenvoice to perform at this year’s ¡CHELLA! alongside Los Tucanes de Tijuana and Mon Laferte. So, winning ‘Best Rock Band’ is not a surprise to many in the music community, but the band’s a different story.

Despite the steady winning, Colin was stupefied at the accomplishment, “I was surprised! We love the awards show. Every year it’s a great night for the community to get together and enjoy each other’s company and achievements. People will say what they will about the awards and the awards show, but for us as a band, being recognized and even just being nominated for a category is a blessing and an honor. I have my two awards with The Night Owls on my dresser next to my bed for when I wake up Ha-ha!” The hard work they have poured into their music and sound is paying off.

Murrieta was also a bit skeptical, “It definitely feels good. However, as cynical as it may sound, I didn’t think we were going to win. I’ve always been confident in our group but when you’re in a room with all those musicians, it’s intimidating.”

“It felt surreal, I have always dreamt of being in a band that just goes for it and now for us winning this award it raises the bar for us to push our boundaries even further,” Ceja shared. Woo further attested, “It was definitely a very proud moment. To me, it was like one of those pats on the back, like a ‘go get ‘em kid,’ you know. Those things people say or do to encourage someone they see trying at something they’re good at, it felt motivating and it also proves to me that more and more people are believing in us and in me.”

Looking back, each Owl traversed their own path to the band. Ceja remembered, “When I had first heard of the group, I was in my second year of school in Boston. I loved the music and at the time Christian was in the group with another friend of mine, James. Never would I have imagined that when I would return home my best friend Christian would call me and ask if Marco and myself would like to join the group. I was shocked but I finally felt like it was my chance to be a part of something big and after we all hung out, I knew that this is where I wanted to be.” That confirmation and commitment flows through the other members as well.

Colin recalled, “It started out innocently enough with ‘G’ and I doing a few gigs here and there. Then we did this chalk festival gig that snowballed into more gigs and a more permanent line-up. I know she had a line-up that was different prior to me but as far as me joining, it seemed to progress naturally after we played together for the first time. I always told her over and over that I loved the song ‘Coachella Gold!’” The orchestration of the band seemed more fate than evolution.

Murrieta recollected, “I remember Jose called me telling me that Giselle was coming over to jam with him and he asked if I can join him on bass. At that point I hadn’t played music in years, I was definitely nervous. And I remember playing through some of her songs and feeling like curveballs were being thrown at me. It was a Bossa Nova groove that went into a Rock groove for some sections and finished it off with a Surf Rock solo. I definitely needed practice. However, Giselle couldn’t have been more inviting. We all immediately clicked, and it felt like we had been playing for years.”

The band’s eclectic sound has developed over several years. Woo has made it a point from the get-go to include all realms of music and incorporating Spanish and English alike. Colin proclaimed, “Dialing in our sound with this new line-up has been amazing. There are so many things we reach for musically from Reggae, Soul, Ska, Rock, Blues, Funk, Cumbia, and Traditional Mexican Folk music to name a few, that its always great having the challenge of negotiating your personality into the sound of the group.” Colin has one of the most varied musical histories in the Coachella Valley. “I come from a Jazz background also that’s very steeped in throwing influences or ‘vocabulary’ into different sonic landscapes and producing something unique to the group of people playing. I feel like we try and carry the torch of this tradition as best as we can.”

“As a group we are constantly pushing ourselves. We never want to ‘phone in’ a performance. We always strive to play at our full potential. And I hope that it shows,” Murrieta confessed.

Ceja has their future set on higher heights, “As far as where we are going, I see this band touring the world. We all have common goals and we are very excited to share this incredible experience with each other.” 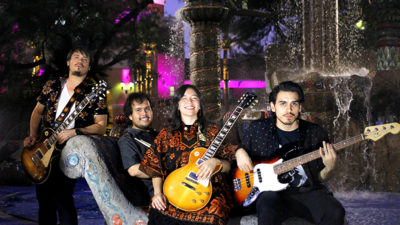 Woo and band are stumped about their appointment as leaders in the Coachella Valley music community. “I’m not fully aware. I’m only mirroring the great leadership I am surrounded with,” Woo admitted. “There are many leaders around, they just haven’t tapped into that superpower yet. I’m sure many of us wonder what we can do to lend a helping hand, what we can do to be of service to others.” Ceja is excited at the opportunity, “It’s incredible! We are surrounded by a vast number of talented musicians and to know that our peers view us in such a high regard gives us the motivation to continue to work harder.” And Murrieta is humbled, “It’s a huge honor, especially with all the talent in this community.”

Woo is hopeful that others will also step in to help guide the music community. “Good and honest leadership can be on the rise if we all believed in ourselves just as much as others believe in us. So, it’s a beautiful feeling to know that I’m being looked at in that manner.”

Colin proclaimed his appreciation and thankfulness for those who have mentored him. “First of all, it’s such a great honor to have that role placed upon me. I feel like I’ve had great examples to learn from. Mikey Reyes and Bryanna Evaro of Desert Rhythm Project have taught me a great deal about being professional. Giselle has taught me a great deal about networking and socializing, being in the backyard party circuit in the east valley with The Basaracts and Tony Duran taught me that even when the sound isn’t the best or when there’s more people on stage than watching, you can still have a great show. It really is an honor to have your peers view you in a leadership role because there are some bad-ass musicians in this valley.”

The band are psyched to release their new set of tunes. Woo beamed, “We are releasing our EP titled Gemini, a six-track album, it will include ‘Coachella Gold,’ which was released early last year. You can find it on Spotify, Apple Music, YouTube etc. I’m excited to get this EP out.” Their new single, “Novedad,” is essential G. Woo & The N.O. It’s a Spanish-language song about novelty and hope that prompts you to dance.

You can find their new single, “Novedad” at: