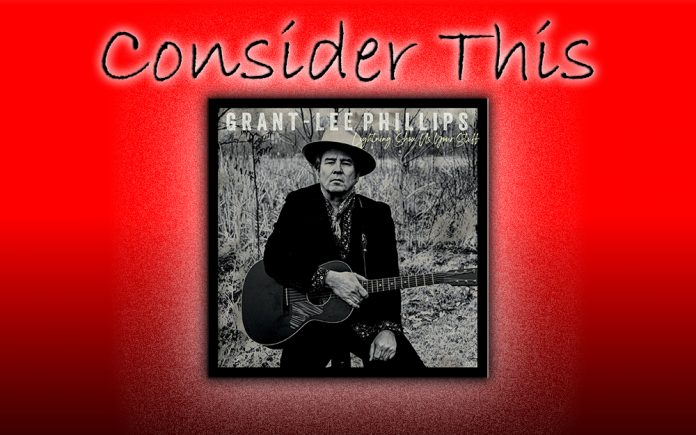 “I may not be young, a lot of songs are sung, but when you’re halfway up ya never count the rungs.”

That’s Grant-Lee Phillips confronting his mortality on “Ain’t Done Yet,” the opening cut from his new album. It’s been two years since his last album was released. Widdershins was surprisingly topical and politically charged (ahh, 2018, when hope and change remained a lingering memory, not a long forgotten pipe dream). Now he’s back with a more introspective effort, Lightning, Show Us Your Stuff.

The Stockton native, born Bryan G. Phillips in 1963, moved to Los Angeles as a teen to attend UCLA. Having picked up guitar a few years earlier, he was immediately attracted to L.A.’s thriving music scene. Not long after he met his future wife, Denise Siegel, he quit school and formed his first incarnation of Shiva Burlesque. After a couple of line-up changes, he connected with bassist Paul Kimble and drummer Joey Peters. By the late ‘80s, the trio had made their bones gigging around town. They released a couple of Psychedelically-inclined albums on two different labels before briefly breaking up.

Grant-Lee, Paul and Joey reemerged in the early ‘90s as Grant Lee Buffalo. They secured a weekly residence at the venerable Café Largo and created quite a buzz. Grant-Lee drew on original inspirations like David Bowie, Alice Cooper, Neil Young, Merle Haggard and Buck Owens, creating a hybrid sound that merged Glam, Psychedelia, Country and Folk.

They were quickly signed to the Slash label and their debut, Fuzzy, arrived in 1993. Soon their music was in heavy rotation on MTV programs like “120 Minutes,” and the band was opening for heavyweight acts like R.E.M., Pearl Jam and Smashing Pumpkins.

Over the next five years, three more critically acclaimed albums, Mighty Joe Moon, Copperopolis and Jubilee appeared, before the band finally ran its course. They quietly called it quits in 1998 and by the dawn of the 21st century, Grant-Lee had embarked on a solo career.

Over the last 20 years, Grant-Lee has recorded nine albums, each with their own distinct sound. Beginning with the bare-bones simplicity of his debut, Ladies Love Oracle, the electric textures of Mobilize and the rich narratives of Virginia Creeper. In 2006 he recharged his creative batteries by recording an album of ‘80s favorites, from bands like the Pixies the Cure, Joy Division, R.E.M. and the Smiths pithily entitled nineteeneighties. The following year he returned with the gauzy Folk-flavor of Strangelet, that led to Little Moon, a wry reflection on fatherhood.  2012’s Walking The Green Corn explored his Creek, Blackfoot and Cherokee heritage. Four years later, The Narrows chronicled his recent move from L.A. to Nashville, and 2018’s Widdershins offered a not-so-veiled broadside of the Trump dictatorship, um, Presidency.

Even without knowing his name, most people are familiar with Grant-Lee’s music from his years on the critically acclaimed “Gilmore Girls” television series. As the “Town Troubadour,” his character could be found busking on the streets of Stars Harlow. His trenchant songs seemed to mirror the happiness and angst celebrated and suffered by mother-daughter duo, Lorelei and Rory. He was on the series for the original 2000-2007 run, and reprised his role on the four-part miniseries which aired on Netflix in 2016.

During these shut down/shut-in pandemic days, Grant-Lee has kept busy by painting, assisting his 12-year old daughter with online classes, writing songs in praise of first responders and the USPS, as well as performing every few weeks from his house via StageIt, the live streaming music platform. Luckily, his new album was already written and recorded before before everything went into lockdown.

“Ain’t Done Yet” kicks the album into gear with a Big Easy-styled brass fanfare, burnished guitars, nimble bass lines and a kick-drum beat. Grant-Lee’s voice is warm and inviting, a soulful combination of honey and woodsmoke. His manner is sly as he offers a tongue-in-cheek plea to ward off death; “Buzzards on the hitching trail, keepin’ a watch out over the trail, let ‘em go and prey on someone else/Circling round above my roof, I just wanna scream out loud, don’t size me up so soon.”

Three singles arrived ahead of the album release. On the first one, “Lowest Low,” Grant-Lee’s whispery vocals wash over courtly Spanish guitars, keening pedal steel, brushed percussion and a trap-kit rhythm. The lyrics speak to a state of mind nearly everyone has experienced, when seclusion is the only answer; “Safe in the room, spin a cocoon, safe in the room for now, face in the steam, I don’t want to be seen, I don’t want to bring you down/Not like this, not at weakest, not at my lowest low.”

“Straight To The Ground” is equal parts mournful and defiant. Stately guitars are bookended by wiry bass lines, faded pedal steel and a thumpy beat . Grant-Lee’s weary tone mirrors a lyric that mine the restless lethargy of life in a small town; “Trains don’t even stop here anymore, if they did, I wouldn’t know what for, what I’d give to buy a ticket out, I’d be out before you’d hear the door/Swear I’d like to burn this place straight to the ground, everything just reminds me that I’m missing out, missing out more than I can say, someday I’d like to set it all aflame.” Flowery pedal steel shadows elegant piano notes on the break, before the final chorus flickers and fades.

The best tracks here take a break from all the emotional sturm und drang and simply exhale. “Sometimes You Wake Up In Charleston” pays homage to this quiet coastal city. Graceful piano notes, gossamer guitars, feathery pedal steel and sturdy bass lines are tethered to a clip-clop gait. Even as it celebrates the town’s gentle rhythms, the live oak, Azaleas and bells of Emmanuel, it acknowledges “In the holiest city of Charleston…men were once enslaved.”

The languid “Leave A Light On” echoes the the rustic splendor of both The Band and Van Morrison. Barbed pedal steel collides with strumming guitars, skittery bass, peppery horns and a relaxed shuffle rhythm. The lyrics chronicle the solitary existence of a touring musician; “Well, I miss your face, being the first one that I see each day, talk on the phone is not the same/But is it wrong because I love it when I do my job, and I just ain’t found no better way.” At the close of the track warm brass accents intertwine with lonesome pedal steel.

Then there’s the sanctified stomp of “Gather Up,” which blends gutbucket guitars, slapping bass lines, crisp handclaps and shackled percussion. Grant-Lee slips affects the manner of a fire and brimstone Preacher whose sermon is less concerned with apocalyptic end times and more troubled by climate change and global warming; “Gather up your children, the earth is reelin’ the seas are bound to swell/The ground it trembles underneath your feet, awaken to the warning bell.”

Other interesting tracks include “Draw The Head,” a shimmering waltz that pays homage to his latest obsession, painting. Then there’s the delicate hush of “Coming To,” which shares some musical DNA with Sam Cooke’s “A Change Is Gonna Come.” The album closes with the cautiously optimistic campfire sing-along of “Walking In My Sleep.”

“Lightning, Show Us Your Stuff,” takes its title from a phrase coined by Grant-Lee’s daughter when she was just a kid, anticipating a storm. The record was self-produced and G-L P handled lead vocals, all guitars and keys. After Widdershins tart topicality, the new record feels more personal, more intimate. It spills secrets and holds you close. In these fractious times, that’s enough.