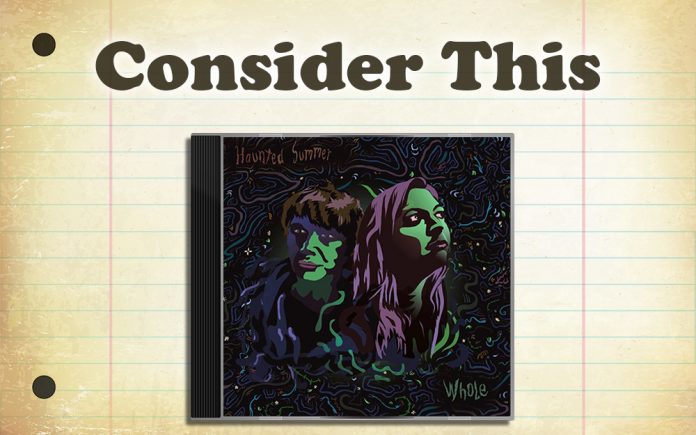 “All alone and not amused, misconstrued and always blue, I cannot forget what I found in you” That’s Haunted Summer, reveling in what the French refer to as the douleur exquise, the exquisite pain of heartbreak on the opening cut of their new album, Whole. Somewhere between the sound of sultry ‘60s Girl Groups, the sophisto-Pop of Burt Bacharach, the sinewy Psychedelia of The Velvet Underground and the Shoegaze-y style of bands like Cocteau Twins, Mazzy Star, The Sundays, Ivy and Azure Ray, stands Haunted Summer.

L.A. natives Bridgette Moody and John Seasons had seen each other around the local music scene for a few years before becoming friends. Dissatisfied with their separate musical projects, love and life in general, their friendship became something more in the summer of 2012. Clicking so perfectly as a couple, inevitably they decided to collaborate creatively. Hoping for the best, but expecting the worst, they were delighted to find that their musical chemistry was as potent as their personal connection. Ditching their current bands, they formed Haunted Summer.

Their debut EP, Something In The Water arrived in 2013. The pair quickly followed up with their first official long-player, Birth, the following year. Their third effort, 2017’s Spirit Guides, came together piece-meal, written and sometimes recorded on the road. But it was their watershed album, distilling all that had come before. For their new album, Whole, they made a conscious decision to hunker down, writing and recording at a quick clip, so there would be brand new music for the road. Of course, those plans were derailed by the pandemic. The album kicks into gear with “Empty Nostalgia.” Spooky organ, swoony keys and shang-a-lang guitars wash over an insistent, tick-tock beat. Bridgette’s drowsy vocals convey the yin yang sensations of acrimony and ennui that accompany a broken romance. The detritus of the relationship is evident, and equivocation is on full display; “Here lies the book you read, same with life and the pictures in your head, we can still reach out, no one else can teach us how time goes on to be.” Jangly guitars on the break undercut the gloom. allowing a little sunshine to peek through.

The latter opens with filigreed fretwork, that quickly intertwines with reticent electric riff-age and stacked ethereal harmonies. Admitting she’s “soaked in disappointment,” the emotional treachery and heartache on display is palpable, even as it’s cloaked in this sunny roundelay. Although Bridgette addresses her ex with a steely resolve; “So, have a life without me, have a life without me, there’s no one left in mourning…” this is clearly unfinished business.

The album’s best tracks hopscotch across the record, beginning with the cinematic shiver of “Camera.” Sun-dappled guitars partner with plinky-plunky keys, Carol Kaye-ified bass lines and a loping beat. The specter of Phil Spector looms behind the woozy arrangement and shimmery harmonies. Lyrics like “I can love you with a light touch, I can pin you on my wall,” indicates that romance is sometimes easier in the abstract.

Then there’s the haunting elegy of the title track. Funereal keys are matched by slack key-flavored guitars, downcast piano and a thwocking beat. Lyrics tenderly eulogize a friend gone to soon; “You never got to see the world, so I’m gonna see it for you, they never got to read your words, so I’m gonna sing them for you.” On the break, the tempo slows and the arrangement shapeshifts, layering swirly guitars over spacy, Psychedelicized keys. Multi-tracked vocals drive the song to crescendo, addressing the dearly departed directly; “But for your sake and mine, I’ll ask a question so bold, well, I just have to know…. does God save the damned?”

On the album’s lone cover, Haunted Summer jettisons the gangly, lo-fi appeal of Daniel Johnston’s epochal “You Put My Love Out The Door.” Recalibrating it with gossamer guitars, barely-there bass, lush keys and a spongy beat. A sad-sack saga of unrequited love; “I rode out to your house, and brought you a Valentine, and what did you do? You put my love out the door….now every February my heart gets sore, when I remember how you put my love out the door,” is buoyed by a bucolic arrangement that gives this lament some Bacharach-ariffic heft.

“Big Knife” feels like a pastoral ode to simple pleasures. Chiming guitars connect with incandescent keys and a tumbling beat. Bridgette’s ingenue-esque vocals recall the beatific innocence of French chanteuses like Francoise Hardy and Jane Birkin. Although early on, lyrics exclaim “simplicity, you always astound me,” halfway through she’s changing her tune; “So pass me the big knife, if we’re playing house, I’ll be Satan’s wife.” As the arrangement spirals into the stratosphere, bargaining becomes the final gambit; “I’ll cut you a deal if you cut me a deal.”

Finally, the record winds down with summery slice of Sunshine Pop ominously entitled “Black Heart.” Sparkly acoustic notes are bookended by lithe bass lines and a chunky, mechanical beat. Lyrics quietly exhort a selfish narcissist to rethink his wicked ways; “Black heart, there’s no light left for you, black heart, there’s no life left for you, what would you say? What would you do if they came for you….What would you be if you never changed? Rearrange, change.” Breezy, sugar rush guitars usher the song to a sweet finish.

The final track, “Retrograde,” weds strummy guitars, mercurial keys and slithery bass to a thunky beat. Introspective lyrics insist we leave old mistakes and setbacks in the past, self-flagellation is never the answer; “My choice is clear, no end is near, life’s darkest path to the light, there’s no need to write all your mishaps on your body, he shelters pain, retrograde has not been saved for me.” Like a mantra, like a prayer, it urges us to persevere.

Haunted Summer played almost everything and co-produced the record with Be Hussey. But they received some assistance on certain tracks from William Toshio Sanderson on bass, Edward Cercedes and Brendan Eder on drums, Cody Berry on guitar and Brian Cleary on piano.

Musically, this record is all over the place, And that’s a good thing. Whole is by turns mordant, melancholy, Blithe and buoyant, desolate and incandescent, a moodily elegant effort. Even as they hold their cards close to their chest, Haunted Summer ends up baring their soul.