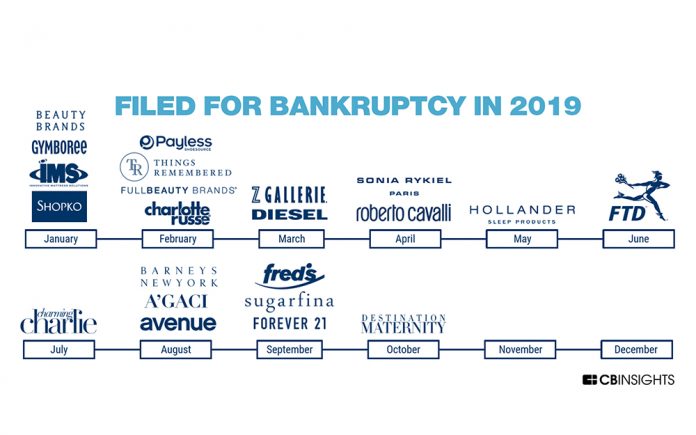 With the end of the holiday shopping season, struggling retailers will be going over their results to determine what their next steps are in the ever-increasing war for the almighty consumer dollar.  As online shopping has grown and shoppers have left the malls, once thriving retailers like Neiman Marcus, Macy’s, Nordstrom’s and JC Penney struggle to differing degrees with the quickly changing retail landscape.

Retail problems have occurred despite a business environment that has bankruptcies levels in the United States that are 40% below historic levels.

When a corporation declares bankruptcy, it is typically called a Chapter 11 or a Chapter 7 citing U.S bankruptcy laws.  Under Chapter 11, the debtor agrees to a payment plan for a portion of their debts in return for the write-off of the remainder.  In these restructurings, equity holders typically lose some or all of their ownership in return for the company’s survival.  When a Chapter 11 does not work, the debtor will go into Chapter 7 where assets are liquidated quickly.

Forever 21 is one of the better-known companies that sought bankruptcy protection this year.  The Los Angeles based family who owns this cheap-chic fashion chain expanded too quickly causing them to underinvest in their supply chain.  As a result, their product offerings failed to resonate with their heavily coveted shoppers who move to retailers like H&M and a bevy of online competitors.  Despite the Chapter 11 filing, the Chang family remains in control of the company.

Shuttering more than 2,500 stores, Payless Shoe Store closed the most locations of any retailer in 2019 with its Chapter 7 filing.  The company first filed for Chapter 11 bankruptcy in 2017.  The latest bankruptcy occurred with debts of $435 million.  Payless, which was started in 1956 in Topeka, Kansas, failed due to principally to fierce competition and poor inventory management.  As Payless’ resources dwindled, it made it impossible to compete with the likes of TJ Maxx, DFW, Target and other online and physical retailers.

Gymboree, the children’s clothing store, filed its Chapter 7 only two years after its initial Chapter 11.   Problems arose after Bain Capital bought this 1,200-location chain for $1.8 billion from its founder.  With changing shopping trends and a heavy debt load, Gymboree failed.  During the auction of assets, The Children’s Place bought the Gymboree name.  Expect a relaunch in the next six months.

Remember Things Remembered?  Not enough did as this gift shop first filed for bankruptcy in 2016 and reentered court protection earlier this year.  Like other retailers, a toxic cocktail of $120 million in debt, fierce competition and declining sales spelled this company’s demise.

Upscale clothier, Barney’s New York entered Chapter 11 this year as sales declined while the rent at their flagship store in New York City tripled to $46 million a year.  Maybe it is time for Barney’s Schenectady.

The retail landscape was littered with casualties in 2019 including Z Galerie, Diesel Jeans, Charlotte Russe, Roberto Cavalli as well as beauty, bridal wear and maternity shops.

Outside of the malls, FTD Flowers filed for bankruptcy earlier this year as they struggled under a debt load of more than $200 million due in large part to their acquisition of ProFlowers in 2014.  New online competition made it difficult for the company to invest in a better online presence while paying their debts.

It might be me but the common theme with each of these business failures is that the retailer did not provide a product that consumers were willing to pay a premium price for.  In a race to the bottom, those with the highest overhead and debt levels will typically lose to their better heeled competitors.

Haddon Libby is the Founder and Managing Partner of Winslow Drake Investment Management, a Fiduciary Only firm.  For more information, please visit www.WinslowDrake.com or email Hlibby@WinslowDrake.com.