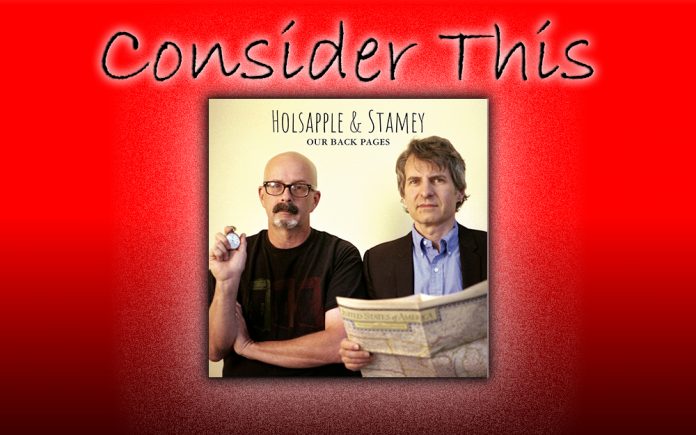 These are dark days for a number of industries. One that has been hit the hardest is the music business. In the face of the pandemic, album releases have been shelved or postponed. Tours, the true lifeblood for any working musician have been delayed indefinitely. As labels, artists and venues begin to create new business models, the duo of Peter Holsapple and Chris Stamey are a little ahead of the curve.

Their new release, Our Back Pages is only available digitally, meaning no physical product needs to be shipped, the money moves more quickly into the artists’ pockets and a portion of the proceeds benefit The Musicares COVID-19 Relief Fund.

Peter and Chris have been pals for at least half a century. Born in Greenwich Connecticut in 1956, Peter’s family migrated to Winston-Salem, North Carolina, just in time to start elementary school. He began playing guitar at age eight, but spent his teen years attending boarding school back East. Originally, Chris was from Chapel Hill, North Carolina, born in 1954, he grew up in nearby Winston-Salem. He began playing music as a kid and in 1963 he was making primitive recordings in his basement. It was around this time that he and Peter first crossed paths.

While Peter was off at Exeter Academy (becoming fast friends with future Tom Petty Heartbreaker, Benmont Tench), Chris was cycling through a series of high school bands playing bass, cello and guitar and learning the rudiments of recording with future producer Mitch Easter.

The pair reunited in 1972 when Peter returned to North Carolina and along with Mitch, formed Rittenhouse Square. The trio recorded an exuberant EP, before adding drummer and former schoolmate, Will Rigby to the line-up. They also changed their name to Little Diesel. The four-piece recorded a locally released 8-track. Sloppy and slightly anarchic, it was the epitome of Garage Rock, and it opened the door for their most lasting enterprise, the dB’s.

Originally, The dB’s assembled in New York City, with Chris, Will and bassist Gene Holder. Peter had remained in North Carolina, fronting a band called The H-Bombs. When that imploded, he became the final piece of the dB’s puzzle. They signed with a U.K. label, Albion, and their debut, Stands for deciBels arrived in 1981. A sparkling 12 song set, it echoed seminal influences like the Beatles and Big Star, the angular snarl of NYC Punks like Television and kind of presaged Robyn Hitchcock’s solo works as well as the ascendance of R.E.M. It was an immediate hit with critics. Soon, the band was on the road, opening for like-minded acts like Bush Tetras, the Bongos and the Fleshtones.

A year later, their second effort, Repercussion, appeared, but following that release, Chris left the band and embarked on a solo career. The dB’s continued as a three-piece and recorded their third album, Like This. Stumbling a bit, the band added and subtracted members and endured the typical record label angst. In the late ‘80s they thought they had finally found a home with the respected indie, I.R.S. Records.

In 1987 they released their most accessible album to date, Sound Of Music. It even featured sui generis vocals from acclaimed singer-songwriter/chanteuse Syd Straw. Although the band received massive exposure as the openers on R.E.M.’s “Document” tour, the album never managed to gain traction commercially. The dB’s amicably called it quits the following year.

Ironically, the band’s adroit oeuvre made it into the record collections of promising newcomers like Fountains Of Wayne, Smithereens and Matthew Sweet. Peter became a touring guitarist with R.E.M., he even helped shape their breakthrough “Out Of Time” album. He worked as a session musician for a bit as Chris forged a respected solo career. The pair reunited in 1991 and as Holsapple & Stamey recorded a brilliant duo album, Mavericks.

For the next couple of decades the pair went their separate ways. Peter joined the Continental Drifters, a ragged but right supergroup that included ex-Dream Syndicate bassist Mark Walton, ex-Bangle Vicki Peterson, New Orleans natives Carlo Nuccio and Ray Ganucheau and the amazingly brilliant Susan Cowsill, who later married Peter. The ensemble lasted until the early 21st century, before breaking up. (Same with Susan and Peter). A guitarist for hire, he hit the road with Hootie & The Blowfish, NRBQ, the Kennedys and the reunited Bangles. In the midst of that activity he released his solo debut, Out Of My Way in 1997.

Meanwhile, Chris sporadically pursued a solo career, opened Modern Recording in Chapel Hill with producer Scott Litt and carved out a second vocation behind the boards. In the process, he’s worked with artists like Whiskytown, Marshall Crenshaw, Branford Marsalis, Tift Merritt and Yo La Tengo. Holsapple & Stamey recovened in 2009 and released a second effort, hERE & nOW. This paved the way for s full-fledged dB’s reunion. Their fifth long-player, the wonderful Falling Off The Sky, appeared in 2012.

Peter’s second solo album, Game Day arrived in 2018. Meanwhile Chris Stamey And Friends released New Songs For The 20th Century a year later. Their new effort, Our Back Pages, has been gestating for several years, it began while the pair were making hERE & nOW. They started working up acoustic arrangements for classic dB’s cuts in between recording new material. Of course the minty fresh songs took precedence and the vintage stuff was set aside, but not forgotten.

Both “Today,” which opens the album, and “Molly Says” were written following Chris’ departure from the band, and first appeared on Sound Of Music in 1987. The opener is miles away from the frenetic locomotion of the original. A blend of jangly acoustic notes, piquant electric riffs gently lap over lowing violin and a clickity-clack beat. Peter and Chris’ harmonies dovetail perfectly as lyrics offer some cautious optimism; “Sometimes I think the one for me, hasn’t happened yet/And sometimes I do play hard to get, but today could be the day.”

“Molly…” is powered by strum-y acoustic guitars, rumbly bass lines and a bit of a tambourine shake. Peter’s droll tenor is slightly out front on the verses, spinning a wry narrative regarding Molly, a malcontent who “Could stand at the top of the world and still complain that she could not see/She could stand in a deep dark hole and still look down on me.” When Molly compares him favorably to her dad, that’s the last straw; “I don’t like her old man that much anyway, I don’t want to hear it.”

The album Stands For deciBels is well represented on four tracks, beginning with the bitter kiss-off of “Black And White.” Eschewing the nervous energy of the original, gorgeous acoustic arpeggios lattice over a supple see-saw melody. Although there’s less malice in their vocal delivery, sentiments like “Ooh, we are finished, as of a long, long time ago…I don’t enjoy you anymore, well, I guess I just don’t enjoy you anymore, well, I guess it’s all laid out in black in white, and you don’t like it at all” still bite. A sitar-riffic guitar solo on the break looks to diffuse the situation.

Lyrically, they flip the script on “Dynamite,” which testifies to the spontaneous combustion of instant attraction, (the not-enjoying is still on the horizon); “Dynamite, late last night/Face jet white, so polite, dyna dyna dynamite.” Conversely, the new arrangement seeks to smooth out the spiky angularity found on “Stands…” Here, braided acoustic guitars cloak thump-y upright bass, some handclappin’ percussion and wheezy accordion.

Finally, “She’s Not Worried” wasn’t included on the first pressings of Stand but popped up later as a bonus track on the IRS reissue. Brilliantly baroque, back then it felt like it just wasn’t made for those times. This incarnation is stripped-down, but still retains its ornate appeal. Bare-bones acoustic licks are tethered to a tiptoe-through-the-tulips beat as plaintive harmonies wash over a feather-light melody. Mordant wit is evinced in the opening couplet; “She’s not bothered by the foolish way I live my life, ‘cause she knows it’ll be over soon/And it will, so she won’t worry, worry now” and reinforced by the toy piano solo.

The Repercussion album is allotted three tracks. “Happenstance” wraps rippling guitars around Silvertone bass lines and vapory keys. Erudite lyrics like “Happenstance we fell into an off-the-cuff vitriolic remark, all I ever wanted was to make you so damn happy/But a mother knows what’s best she said, a mother knows what’s right, so run back to your mother, out of mind out of sight” signal the end of a budding romance. Peter and Chris manage to harmonize through their sneer, but the fractious Flamenco solo on the break mirrors the collective acrimony.

“From A Window To A Screen” is awash is dissonant heartbreak. The buzzy, low-key guitar on the original is swapped out for some rambling, back porch banjo and cascading ukulele. Hushed harmonies underscore the ache of a fractured romance that was “careless at the start, cautious at the end.”

The best song here is possibly the oldest and the newest. “Picture Sleeve” was a title the dB’s kicked around as early as 1978. A few chords and snatches of lyrics were all Peter and Chris could recall 40 years later, so they used that as a springboard, creating a brand new song. Winsome electrified riffs are shadowed by sturdy acoustic rhythm guitar. Like the Who’s “Pictures Of Lily” (sans the onanism) and Steely Dan’s “Peg,” the song’s narrator becomes infatuated with an image; “Fell in love with a girl on a picture sleeve, that I saw in an ad in N.M.E…..Found her in the back on an indie bin, she played the drums, she could make the drumsticks spin/They wrapped around her fingers, as she counted it in, sitting back with her cool sardonic grin.” With a few neatly turned phrases, the song recalls a simpler, more innocent time. The shimmery guitars on the break accentuate the sense of nostalgia.

The album closes with the third Repercussion cut, “Nothing Is Wrong.” The dour melody is anchored by ringing acoustic riffs, prickly electric guitar, plaintive piano and an accelerated, kick-drum beat. Yet again, the lyrics traffic in what Jimi Hendrix once characterized as “Love Or Confusion.” Keening, choir boy harmonies levitate, and keep the listener from hopelessly wallowing in the mire.

The guys received some assistance from John Teer and Libby Rodenbough on violin while Andy Burton added keys. Forever dB’ers Gene Holder and Will Rigby provided bass and drums. Peter and Chris played everything else, including banjo, Ukulele, harmonium, both upright and Silvertone basses, toy piano, and plenty o’ guitars.

Although this was recorded piecemeal, the result feels like a fairly cohesive effort. At times, Our Back Pages displays the loose-limbed charm of a campfire sing-a-long. It seems wildly apropos that the album’s title pays sideways homage to a Bob Dylan song, “My Back Pages.” To paraphrase the lyrics from that classic track, Holsapple & Stamey’s music is “too serious to fool, too noble to neglect.”