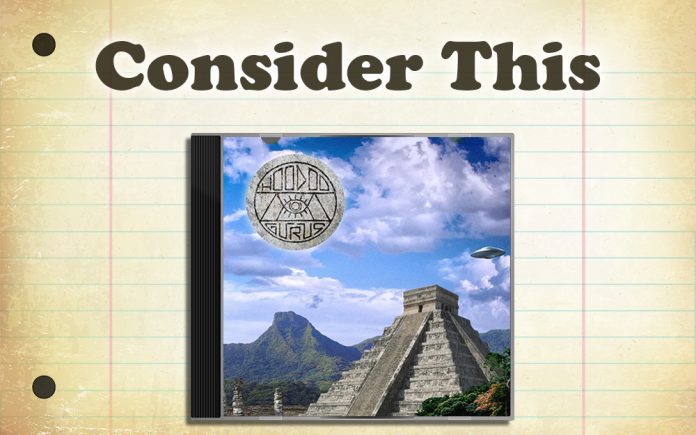 Although Hoodoo Gurus have been a going concern for over 40 years, their music manages the neat trick of sounding fresh and familiar at the same time. The Sydney, Australia four-piece took lyrical inspiration from kitschy Americana like flying saucers, B-movies, junk food and cheesy sitcoms. Musically, they created a potent combo-platter of Garage Rock, Power Pop, Punk and Surf Rock that proved irresistible.

Hoodoo Gurus rose from the ashes of seminal Aussie Punk bands The Manikins, The Victims, The Scientists and XL Capris. Originally Le Hoodoo Gurus, the original line-up favored the novel approach of three guitarists, drums and no bass. Dave Faulkner (vocals/guitar) has been a constant presence in the Gurus since it’s inception, with Brad Shepherd (vocals/guitars) joining soon after they abandoned the French prefix. The current line-up includes ex-Divinyl Rick Grossman (vocals/bass) and ex-Celibate Rifle Nik Reith (drums).

Beginning with their 1984 debut, Stoneage Romeos, the band released seven more studio LPs. In their home country their records have consistently achieved multi-platinum status, along with critical approbation. That’s translated into several Top 20 albums and Top 40 singles. In 2007 they were inducted into the ARIA (Australian Record Industry Association) Hall Of Fame. The Gurus have also carved out a niche in America, touring and creating enduring friendships with like-minded bands like The Bangles, The Fleshtones, The Flamin’ Groovies and Redd Kross. The band continue to play to packed houses all over the world. Although it was recorded during the pandemic, their newest effort, Chariot Of The Gods, finds the band refreshed and invigorated.

The record opens with “{Intro} Early Opener” which unfurls with a mix of ambient chatter, clinking cocktail glasses, and snatches of the Gurus’ epochal hit, “Come Anytime” waft into the ether, before segueing into the next three tracks. Each one hurtles out of the speakers detonating like aural smart-bombs. First up is “World Of Pain” a Glam-tastic stomp that’s anchored by a walloping back-beat, throbbing bass lines, strafing guitars and buzzy, synchronized saxophone and keys. As the urgent melody pitches to and fro, lyrics nonchalantly catalogue a series of not-so-comical mishaps connected an unquenchable thirst for alcohol; “Big Night ends with a thud, kicked out, tasting my blood, I’m a tragic mess/Daybreak, crawl to my bed, bruised up, puffy and red, it was fun, I guess? Too drunk to undress.” The drums pound out a tribal tattoo on the break, guitar, bass, sax and keys fall in lockstep just behind stuttering, ah-ha-ha backing vocals. Physical pain and humiliation become the song’s leitmotif; “Wounds heal, nothing too deep, black eye, I got off cheap, any broken bones? No, I don’t think so, how did I get home and where’s my telephone?”

If it were possible for The Who and the Beach Boys to create a musical love child, it might sound like “Get Out Of Dodge.” Jangly acoustic power chords connect with darting bass lines, tinkly saloon piano and a tick-tock beat. Lyrics rail against conformity, groupthink and the pitfalls of herd mentality; “This town is narrow-minded, the people here are blinded by hate, they won’t me you in the middle and we found out a little too late, so don’t wait, Son, it’s time to cut out and run.” Sunshiny harmonies, partially provided by Vicki Peterson of The Bangles and her husband John Cowsill of, well, The Cowsills, stack on the chorus and oooh-oooh atop elastic guitars on the break.

“Answered Prayers” opens with downstroke rhythm riffs that are quickly supplanted by prickly lead licks, menacing bass lines and a cantilevered beat. Dave’s mien is suitably sinister as he slips into the skin of a shameless sociopath; “You had me on the side, that’s how I had you too, you weren’t the only one, you shouldn’t kid yourself/That’s how it is with me and how it’s always been, you shouldn’t kid yourself, the rest is up to you.” Guitars slash and rev between the verses, ratcheting up the tension. The chorus pulls no punches; “I’m feeling fickle, a little Travis Bickle… I was your answered prayer, I filled a yearning need, now you depend on me, so go to hell.”

It’s hard to believe these guys are all on the other side of 60, there’s an urgency and energy on display that belies their AARP standing. Take the first single, “Carry On,” a sharp and indefatigable rocker that wraps lithe, electric guitars, angular bass, shadowy keys and a kick-drum beat around an anthemic melody. Dave momentarily jettisons the snark and smart-assery and offers some helpful coping mechanisms to combat self-doubt; “I doubt myself sometimes but I turned out all right, I’ll take one on the chin-but then I’ll stand up and fight.” Volcanic guitars erupt on the break, shaded by pummeling drums. Shimmery harmonies wash over the bridge; “we don’t shirk, we don’t shout and we get business done, if they don’t listen we will still carry on.

Then there’s the caustic delight of “Don’t Save My Soul.” Dave’s yodel-riffic rasp rides roughshod over whipcrack guitars and hell-for-leather bass lines, each tethered to a galloping gait. Lyrics straddle the fence between apocryphal autobiography; “I didn’t know what time it was the moment I was born, I only knew the time was right on that October morn, I hit the ground without a plan, I opened up my eyes, and pretty soon I figured out I won the booby prize,” and pseudo-spiritual enlightenment; “what is the word I’m looking for, one everybody knows, but up to now it’s eluded me, was never even close/I ain’t certain it exists, I know it can’t be bought, and when I got a taste it, it wasn’t what I thought.” Stampeding guitars collide with reverb-drenched riffs, thundery bass lines and a triple-time kick on the break, before the song winnows down to one skittery note.

Finally, “I Come From Your Future” matches fuzz-crusted guitars and sandblasted bass to a pummeling percussive attack. Lyrics sketch out a cryptic end-times scenario that takes on added resonance in these days of the Ukrainian invasion. Putin’s pasty visage hovers over lyrics like “You had your fun, so it shall end, now you are done, never again/This is a fact you can’t deny, under attack you will comply.” As the arrangement accelerates, hugging the melody’s hairpin turns, Psychedelic Wah-Wah guitars crash over roiling bass and the piledriving beat. The haunting refrain “from the future” hypnotizes as the sonic maelstrom stops on a dime.

The action briefly slows on “Was I Supposed To Care.” Wobbly guitar chords, sticky keys and a hi-hat kick share some musical DNA with (gulp) Aerosmith’s “Dream On.” Lyrics limn the ache of a wishy-washy break-up; “Now you’re alone, you should have known it might turn out this way, but hold the phone, nothing’s set in stone, the skies are looking gray, but it’s just another day.” Stinging guitars partner with sitar-flavored riffs between each verse before a moment of compassionate commiseration; “So much wasted, barely tasted, that sweet life you should have had, disenchanted, taken for granted, it’s no wonder you feel sad,” but even the beatific backing vocals can’t blunt the bitterness and regret.

On a record stacked with superlative tracks, four stand out from the pack, and are back-to-back, smack in the middle of the album. “Hang With The Girls” weds staccato guitar riffs to spidery bass lines and a punishing beat. (Almost) ripped-from-the-headlines lyrics offer a twist on parental confusion over gender and heteronormative expectations. Jimmy and Jennie are a couple of kids exploring their options in a world that venerates conformity. “Jimmy’s mother is worried, about her precious boy, the other lads in the playground, he chooses to avoid…Jennie’s father is worried, she don’t like gingham, or fancy linen, she goes for denim instead.” Scorching lead guitar on the break is mirrored by Chuck Berry-esque rhythm licks and plinky piano. Just when you think you have the story figured out, the bridge disabuses you of all preconceptions; “Forget the gender, just love me tender, this ain’t no lavender love/They found each other, love one and another, and thank the heavens above, they’re in love, they’re in love, they’re in love…now Jennie’s hanging with Jim.”

On “My Imaginary Friend,” betrayal comes from an unlikely source. Jangly, Byrdsian guitars spiral atop brittle bass lines and a thumping beat. Incredulous lyrics unspool a sad-sack saga; “Now my imaginary friend won’t talk to me, can you imagine how that feels, to be rejected by someone who was not there? I ought to laugh but the pain is real.” Reminiscing (but not in a chirpy, Little River Band way), over the good times, sparkly guitars take flight on the break, but the treachery is real: “I thought we were thick as thieves, how could I be so naïve? Caught up in a world of make-believe.” Hopefully, a security blanket can take up some of the emotional slack.

“Equinox” is one of two tracks written by Brad Shepherd, (the other being “I Come For Your Future”). A shimmering slice of sweet Psychedelia, it blends Sunshine Pop harmonies, chiming guitars, rubbery bass lines, space-age keys and an urgent tambourine shake. The effervescent chorus approximates that twice-a-year phenomenon when the sun crosses the celestial equator; “Winter like Summer, ok, Summer meets Winter halfway, welcome tomorrow today, pack up your sorrows away, it was a day like today.”

Finally, the title-track takes us on a magic carpet ride powered by phased guitars, thrumming bass notes, pinging keys and an insistent Bo Diddly beat. Cryptic lyrics hint at an epic, intergalactic battle, but in this moment in history, (once again), it’s hard not to equate lines like “No time to lament the many souls who have died, fighting to prevent our genocide, unrelenting gods swept all resistance aside, making us repent our human pride, human pride, foolish pride, they all died..” with the history being made in the Ukraine. Halfway through, the arrangement shapeshifts, layering in whooshy keys, shuddery rhythm guitar and snaking wah-wah riffs leading up to a stinging crescendo before powering down with rippling keys.

The record winds down with “Settle Down” and “Got To Get You Out Of My Life.” The former walks the line between ‘60s Garage Rock and ‘90s Grunge. Lyrics like “One by one, my friends have upped and gone, they’ve found new lives on Amazon, no smiley face emoticons, I won’t see them anon, and I’m left to soldier on,” decries the sterile convenience of modern technology, which has left us isolated, insulated and alone in our own echo chamber.

Unlike The Fab Four, the Hoodoos have no plans to get you into their life, in fact, they’d prefer that you’d get out, which the latter song perfectly elucidates. This bitter kiss-off is cloaked in soto-voce vocals, piquant guitars, see-saw bass, thin, wild mercury keys and a rumbly beat. Lyrics deliver a withering assessment that leaves no room for equivocation; “Your endless stories are just too much, they all involve meeting such-and-such so excuse me if I lose touch, you can include me out, yes, I’m out.” The subterranean vibe of the track leans closer The Velvet Underground than The Easy Beats, and the vitriol is underscored by a scabrous guitar solo. It’s a banging end to a great record.

Although it’s been 12 years since their last album, The Hoodoo Gurus never miss a beat. Chariot Of The Gods drives home the essential truth that this band’s sound remains timeless.