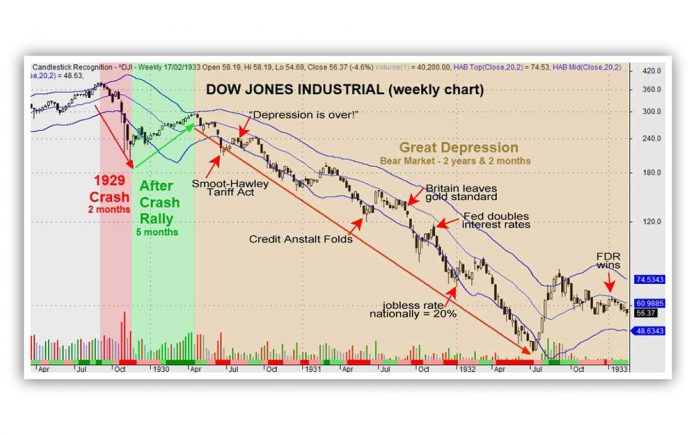 Due to the global economic shutdown, it is increasingly likely that the United States is entering only its second depression in 150 years.  The depth of this economic decline will be decided in large part by the actions of our elected leaders over the next few months.

To understand the difference between a depression and a recession, a depression is the contraction in the Gross Domestic Product (GDP) by at least 10%.  The Atlanta Federal Reserve office estimates that GDP could contract by more than 40% in the 2nd quarter while Goldman Sachs is predicting a 39% slide.  For comparison, a recession is a less severe contraction in GDP for a shorter period of time.

As we have already seen with JC Penney, Neiman Marcus and The Gap, bankruptcies go up during a depression.  We can expect to see municipalities domestically and nations globally defaulting on their debts.  Areas reliant on tourism will be hit disproportionately hard.

Due to the massive expansion of government debt levels, we can expect our currency value to decline.  This means that what we buy from countries with stronger financial conditions will become more expensive.  During periods like these, asset prices become more volatile.  The price of oil is a perfect example of this phenomenon in action.

While the price of imports can be expected to increase, the mix of lower GDP and bankruptcies will keep prices low in the near-term.  By adding so much debt at the federal level, we can expect to see the US dollar decline in value which will eventually lead to inflation.  People typically think of inflation in terms of higher interest rates.  Due to the extraordinary actions taken by the Federal Reserve to keep our economy stable and interest rates low, inflation is more likely to show up in the cost of goods like food.  Lower GDP and increased debt will also negatively impact the ability of the economy to grow.

To avoid a depression in our region, we would need to find a way to offset the lost revenue from lower tourism and the cancellation of major events like Coachella and Stagecoach.  Without an alternative revenue source, it is difficult to see the return to past economic activity in our region until a vaccine or treatment is available.  Given that the virus has caused significant economic damage globally, it will take some time for tourism to return to pre-pandemic levels.

In closing, we should be concerned by President Trump’s stated desire to impose strict new tariffs on Chinese goods.  A look at the 1929 Depression finds that economic protectionism laws passed under President Hoover served to make the Depression worse.  While we may be upset with China for several their actions, now is most certainly not the time to act.

As an example, eight months into the Hoover presidency, the stock market crashed.  To fight declines in our national GDP, two Republican senators wrote and passed the Smoot-Hawley Act.  This act raised taxes on imports which caused foreign countries to avoid our goods at the time when our economy needed these purchases most.  The effort to help American business served to make things worse.  From 1929 to 1933, American imports fell by two-thirds to $1.5 billion while exports fell 61% to $2.1 billion.  Meanwhile European exports to the United States fell by $1.5 billion to $400 million while our exports to Europe fell by a corresponding amount to $800 million.  Globally trade declined by two-thirds from 1929 to 1933.

Fast forward 90 years and the American economy generated nearly $2 trillion in GDP per month prior to the shutdown.  For the second quarter, a 40% decline would drop output to $1.2 trillion.

The next few months will be critical in determining how bad the depression will be.  As our economy is heavily reliant on tourism, expect our emergence from the shutdown to be slower and more difficult than other areas of the United States.  While we should all hope and pray for a speedy return to whatever the new normal will be, we need to face the reality that we are entering a period of time that could be some of the most difficult of our lifetimes.