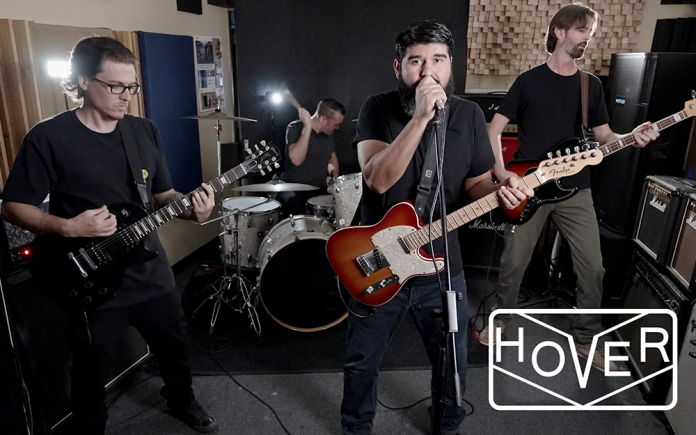 Well respected by fans and fellow musicians alike, HOVER consists of some core guys that have been making their mark as rockers in the desert music scene for the better part of a decade. With Frank Michel on lead vocals/guitar, James Hollis Eaton on guitar/vocals, Shawn “Stretch” Fisher on bass and Bahrum Moghadam on drums/vocals these have a plethora of talent and creativity to bring to the stage so, after not performing as a band since 2019, they are champing at the bit to show us what they’ve been up to.

CVW: “You guys have been in some transitions as a band over the past  decade, starting as Burning Bettie and then Hollace and now HOVER which I know you started a few years back. What’s been the transition to your current lineup?” 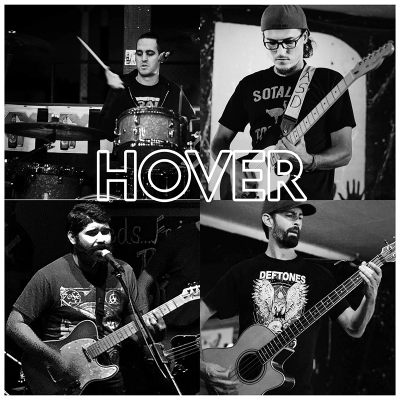 Michel: “James, Stretch and I have been playing together now for nearly a decade. We have a tight brotherhood full of experiences that has made us the most solid we’ve ever been. I have known Bahrum since 2005 when we met at Riverside City College in their music program and we both graduated from there with music performance degrees. Over the years, we worked on various music/studio projects together and things have come full circle now with him in the band.”

Michel continues: “Coming off our previous project, Hollace, we went through a couple of drummers that just didn’t work out. During that time, Bahrum did us a favor and came to The Sound Hub to track drums on our self-titled album ‘HOVER.’ We instantly loved his playing and attitude, and wanted him in the band, but he was not available at that time.  Somehow, things just worked out as time went on and eventually he joined us. He also brought a lot of studio experience and knowledge along with his musicianship. Bahrum was actually running his own recording studio in Orange County prior to the Covid shutdowns. This has helped make The Sound Hub what it is today.”

Michel: “Things are going great! It’s where we produce and engineer most of our music. Our studio specializes in analog recording production and is open to the public.

CVW:  “As a band, what were you guys up to during the shutdown?”

Michel: We released our self-titled album last April, (which is out on all major streaming platforms & CD) so production kept us busy. At the same time, Covid led to James moving away to Sacramento where he is currently living and Bahrum moving out of state. We’ve stayed in constant communication and kept sharing ideas for new music. It was definitely a new challenge for us that we overcame. Bahrum eventually moved back last December.”

CVW: “Let’s talk about the video itself. Shooting it, how you came up with the concepts, etc.”

Michel: “We worked with Paul Teel who filmed and directed the video for our upcoming single, “Boomerang.” He was amazing to work with and very creative. He is an old friend of Bahrum’s and that is how the connection was made. We initially had our own idea of how this video would be shot and that it would be outside. We had a location, date and time set. When the day came, there was a giant wind storm that stopped our idea in its tracks! We couldn’t believe it and what made things even more stressful was that James had come from Sacramento for the video shoot! Paul really came through and started suggesting ideas, immediately insisting we had to get something done since we were all gathered together. It made sense that we ended up shooting in our base of operations, The Sound Hub!”

Michel continues: “We weren’t sure that it would work out but, Paul showed us some initial shots and had us pretty convinced it would all be ok. In the end, we all feel it came out pretty amazing with his creative direction, editing and production. People can reach out to Paul for their video projects as well.” www.paulteelproductions.com

CVW: “What is in store for Hover in the near future?”

Michel: “We are excited to get back out playing and have back to back shows coming August 19th and 20th. The 19th is at The Desert Fox in Palm Desert and The 20th is at The Hood Bar & Pizza along with Jetta King.Thanks to CV Weekly for hosting these shows! Another music video is already being planned out for our next single release in the coming months. We are also planning an EP release for early next year which has already been recorded and is being edited/mixed as we speak. We are planning future shows when we can have James available for us. We will also continue constantly creating and releasing new music and videos.”