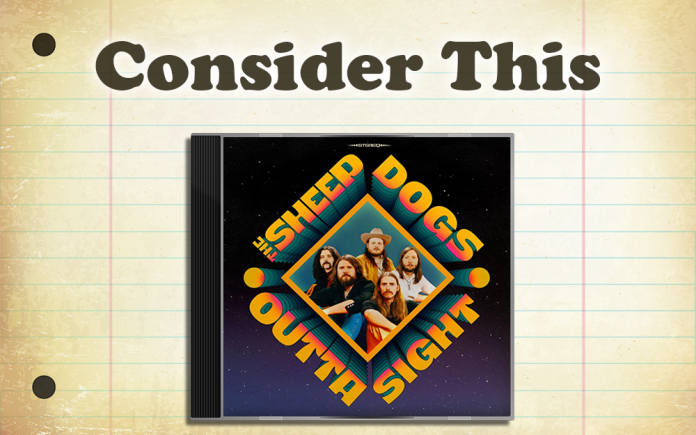 The core of the Sheepdogs, Ewan Currie (lead vocals, guitars, alto saxophone, synthesizer and percussion), Ryan Gullen (bass, backing vocals) and Sam Corbett (drums, backing vocals, percussion and tenor saxophone) came together in the early aughts as The Brakes. Initially, they hunkered down in Sam’s parents’ basement, mastering a surfeit of Classic Rock songs and filtering in newer tracks from The Black Keys and Kings Of Leon. Pretty soon, they began concentrating on writing original music. Their debut EP arrived in 2006, but once they added guitarist Leot Hanson to the mix, the newly minted four-piece became The Sheepdogs.

Their self-released long-player, Trying To Grow, was released soon after. In between non-stop touring, the band recorded albums at a quick clip. 2008’s Big Stand was followed by 2010’s Learn & Burn. Each record offered up a heady brew of Swamp Rock, Jazz, Blues Country, Blues, Southern Boogie and Bluegrass.

Critical and commercial success was immediate in their home country. In fact, Learn… netted them three Juno Awards (the Canadian equivalent of a Grammy). Although they’d already circumnavigated the globe, even opening for John Fogerty in Australia, America proved a tougher nut to crack. But they got a leg-up when they entered a Rolling Stone contest called Choose The Cover. Competing against 15 bands, they won, and they became the first unsigned band to grace the front of the venerable magazine.

A performance on Late Night With Jimmy Fallon led to appearances at the Osheaga and Bonnaroo festivals. An introduction to Black Keys drummer Patrick Carney followed. He produced their self-titled 2012 album and it hit #1 on the Canadian charts. A couple of years later, Leot left the band and opened a bar/concert venue in Saskatoon. Rusty Maytas took his place for 2015’s Future Nostalgia album and subsequent tour. Not long after, Ewan’s brother Shamus was added to the line-up, providing keys, percussion and trombone. Virtuoso guitarist Jim Bowskill added some extra muscle on tour and became a full-fledged Sheepdog when Rusty left the band. The five-piece returned to the studio to record their sixth record, Changing Colours. The next year, The Rival Sons invited the band to open their 2019 tour. Sons’ fans immediately embraced their sunshiny songs and shaggily precise guitarmony, raising their profile exponentially in America. Somehow, Ewan found time to release a solo album in 2019, and 2021 saw the release of the No Simple Thing EP. Of course, thanks to the pandemic, the band weren’t able to road-test new material on tour. Bored and frustrated during this enforced vacation, they set up their gear inside Toronto’s Taurus Recording Studio, ran through the new stuff, and as soon as it sounded good, they’d have the engineer hit record. The result is their seventh long-player, Outta Sight.

The album’s opening three tracks hurtle out of the speakers with a muscular agility. If Boston and B.T.O. ever conceived a musical love child, it might sound like “Here I Am.” Greazy guitar licks, swirly keys and rock-ribbed bass are wed to a pummeling backbeat. Honeyed harmonies sync-up on the chorus, which provides a cheerful introduction of sorts; “Here I am with the band, sing it loud, that’s the plan, making noise with the fam, would someone please give me a hand?” Shang-a-lang guitars sidle between each verse, shaded by percolating electric piano. By the break, a scuzzy guitar solo erupts, supplanted by soaring AOR guitars. One more joyous chorus and the arrangement stops on a dime.

Lyrically, “Find The Truth” offers a bit of sin and salvation, Musically, choogling guitars collide with slippery bass lines, swivel-hipped keys and a pile-driving beat. Ewan’s stentorian tenor is nearly elbowed aside by the three-pronged guitar attack that charges across the arrangement, damn the torpedoes, full-speed ahead. Following the insistent bridge, a stinging and stratospheric guitar salvo is launched, enveloping the final two choruses before winding down.

Meanwhile, if there were still such a thing as AM Pop radio, “I Wanna Know You” would sandwich comfortably between Argent’s “Hold Your Head Up,” Deep Purple’s “My Woman From Tokyo, the Eagles’ “Witchy Woman” and Foreigner’s “Feels Like The First Time.” Growly guitars partner with breezy keys, blustery bass, a walloping beat and stacked, Soulful vocals. There’s a Countrified lilt to Ewan’s lead vocal as he offers up a Springsteen-esque invitation; “Only a fool would try and slow me down, but don’t you dare spin me round, let’s gas her up and we’ll blow this town/Find a place we can’t be found, no secret stars around, feet marching on the ground, so tired of being locked down.” gritty, gut-bucket guitars spiral skyward on the break.

The action slows on a couple tracks, “Mama Was A Gardener” and “Didn’t I.” The former was written by Shamus Currie, who also handles lead vocals. Mellow, meandering and slightly melancholy, the melody hinges on twin Eeyore-centric guitars, warm organ colors, sidewinding bass and a thunking beat. As he tills the soil of a fallow relationship, he seeks some a little guidance from his folks; “My Mama was a gardener, she tried to heal the land, my father was a thinking man, you know he played in the band, and the son they raised is gonna need a helping hand, to reach a place where he can understand.” Taut, concentric guitar notes, sanctified whoa-whoas and emphatic handclaps swing the song to a close.

Spectral and serpentine, the latter delivers a mixed message; Labyrinthine logic like “Didn’t I tell you I’d be home? Didn’t I tell you to leave me alone? Didn’t I tell you how to be wrong? Didn’t I tell you it’s in my song?” is cloaked in shimmery guitars, spacey keys and a conga-riffic beat. Ewan’s vocal inflections shapeshift from menacing to seductive with each neatly-turned phrase. The arrangement follows suit as phantasmagoric guitars ebb and flow atop chimerical keys on the break.

The best songs here add some new colors to The Sheepdogs’ sonic palette. Take “Goddamn Money,” a tough-minded diatribe on the evils of filthy lucre. It has all the earmarks of becoming an instant classic. Slashing, sludge-y guitar chords ride roughshod over nimble bass lines, woozy keys, insistent piano and a chunky, percussive tattoo. The shout-it-out chorus; “Goddamn, it’s the Son Of Sam, spending all my time working for the man, I need some money, cheap thrills, well, I shoot to kill, emptied out my pockets just to pay the bills, I need some money,” is the perfect anthem for these cash-strapped times.

“Scarborough Street Fight” is the album’s magnum opus. A cogent blend of urban outlaw poetry, brawling guitars, hoodoo-voodoo keys, tensile bass lines and a blitzkrieg beat. Ewan’s terse reportage; “Hard living, god-fearing, out on the streets, car stealing, raw dealing, nothing’s ever free, Scarborough street fight, lord these feuds are deep,” is matched by strafing, staccato riff-age. A spiky, yowling guitar solo is untethered on the first break, bookended by the metallic crunch of the rhythm guitars. This veritable guitar army achieves harmonic convergence just before Ewan drops back in to see what condition his condition is in. The final break accelerates around the bend, building to a stunning crescendo, as surging organ runs intertwine with a wah-wah throb, filigreed electric licks and rippling rhythm notes.

Finally, “So Far Gone,” executes a flawless bait and switch. Incongruous synth drums (that would seem more at home on a Berlin or Kajagoogoo song), are mercifully subsumed by a fuzz-crusted Country-Blues groove. Ricocheting guitar riffs sally forth atop stuttery bass lines, a bang-a-gong beat and a tambourine shake. Barely through the first chorus, turbo-charged guitars, equal parts modal and distorto, hijack the arrangement, stacking strutting power chords back-to-back. It’s the Saskatoon equivalent of the Quiet-Loud dynamic that The Pixies pioneered and Nirvana perfected.

Other interesting tracks include the anthemic Honky-Tonk of “Carrying On” and the ticklish nocturnal assignation of “Waiting For Your Call.” The album closes with the filigreed hoedown of “Roughrider ’89.” Sinewy guitars line up with flinty keys, angular bass and a chugging beat. Lyrics examine the pro et contra that accompanies the life of a touring musician; “Time to go, I never unpacked my suitcase, and I slept in my clothes/Back on the road, leaving is hell and heaven, no place like home.” On the break, the song locks into a skip-to-my-lou/Hee-Haw groove before downshifting into a Psychedelic vortex and then crossing the Rubicon on the back of a four-on-the-floor beat. It’s an ambitious finish to a great record.

This record is fun front to back. Playful, lean and unfussy, it combines Monster hooks, slow-cooked Soul, rambunctious Southern-Boogie, ballsy arrangements, in-the-pocket harmonies and crisp instrumentation. If you’re old enough to recall your ‘70s slang, you know the term “outta sight,” indicates something is cool, the best, excellent, even stellar. The Urban Dictionary insists that it’s “the cooler way to say ‘far out.’” That perfectly describes the shaggy, symbiotic synchronicity that is the Sheepdogs’ latest album.