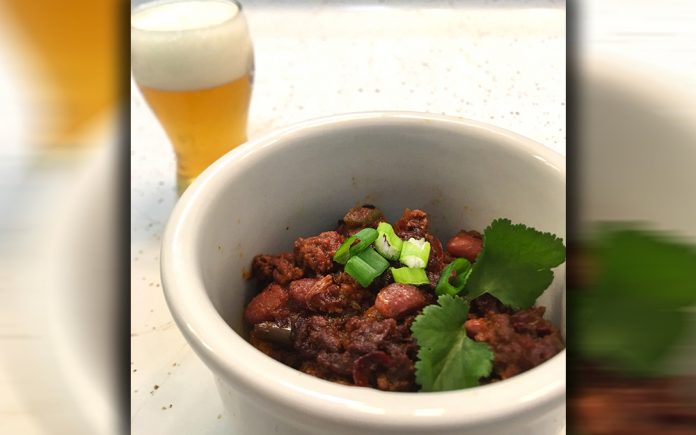 Seems odd to think of cooking as a hobby, but we live in a society of convenience, where Door Dash and Uber Eats exist so that we don’t even have to drag our dehydrated, hungover, flu-afflicted, Netflix binging asses to the nearest Taco Bell to forage for sustenance. In a world where many people just don’t’ want to put time and effort into what they put into their bodies, preparing a meal from scratch is definitely a pastime and not a necessity. But of the many joys that you can get from cooking, one of the greatest is being able to add ingredients that you wouldn’t from takeout, and creating unique flavors that can only come from your own kitchen. If you’ve never cooked with beer before, it’s a subtle twist that adds depth of flavor.

While most people are familiar with the concept of beer battering fish and onion rings, beer really shines as an ingredient when it’s used in soups and stews! Seriously, there’s no real magic going on, it’s the simple trick of replacing broth with beer in any recipe that calls for beef, chicken, or vegetable broth as an ingredient. I mean, beer is basically barley broth when you really think about it, a grain and hop stock as it were, so the substitution makes total sense as to why it’s such a flavor enhancer. The only trick to cooking with beer is deciding what type of beer you want to cook with, as different styles will indeed impart different flavors to your dish.

While pilsners, saisons and IPAs all have their places in certain dishes (I make an excellent IPA and brussels sprouts stir fry), the flavors of brown ales, porters and stouts compliment soups and stews so much better than other types of beer, and this has to do with a process called the Maillard reaction. That term applies to a chemical reaction that occurs when amino acids and sugars in protein brown when cooked. Seared steaks, toasted bread, roasting coffee, and kilned, darkened brewing malts, the kinds used to make dark ales, all are created by the Maillard process. With Maillard reactions giving both stouts and beef stews their rich, umami flavors, it’s no wonder they pair so well together in cooking.

Chili is a spiced stew that is hearty, warming, can be done as an all-meat or vegetarian dish, and both versions are better when cooked with beer. I make my chili with a chuck roast and pinto beans, creating a traditional chili con carne recipe. Whole chilis are used, as well as powdered, dried chili and paprika, to add depth of flavor. Since everyone’s palate is different, I encourage anyone following this recipe to season to your own liking; just add a little spice at first, and increase until it tastes just the way you like.

Beans: Pinto or Small Red (dried and rehydrated, or canned). 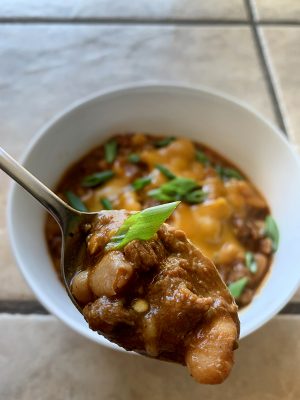 Start by dicing the meat into small cubes, don’t worry about mincing too fine, as the meat will shrink during cooking. Add a thin layer of oil to the bottom of a cooking pot, and cook the meat over medium-high flame until it starts to brown. Add the chopped and diced vegetables to the pot and continue to cook until all ingredients are browned (If you choose not to deseed your chilis, you may create a cloud of chili smoke that will get your entire household coughing, so maybe open a window or two). Once your meats and vegetables are cooked, it is time to add your spices. I eyeball all of my spices into a bowl and mix them together before adding to the pot, with salt, smoked paprika, garlic and chili powder being used in a larger quantity. Add a little less of cumin, Mexican oregano, and black pepper to the mix, as those are stronger flavors that can easily overpower the dish. Just a dash of cinnamon gives a warming note that is delicious, just remember to go easy on all of your powdered spices at first. You can always add more later but you cannot remove. Cook the spiced meat and aromatics until all ingredients are evenly coated, and the spice flavors are woken up. At this point, it is time to add your beer and tomato sauces. While Guinness stout or Newcastle Brown Ale work just fine in this dish, a more flavorful craft beer will give you a more flavorful finished product. Add your beans to the pot (be sure they’re already cooked if fresh, or rinsed if canned) and stir before reducing heat to medium-low and simmering for an hour. If you really want the flavors to marry, reduce heat to low and allow your chili to simmer for two hours, stirring occasionally. Taste occasionally as well, adding more spices if needed. You want your chili to reduce and thicken, intensifying the flavors. When your chili is done, serve topped with garnishes of your choice, and enjoy the depth of flavors you’ve created. Congratulations, you’re now cooking with beer!