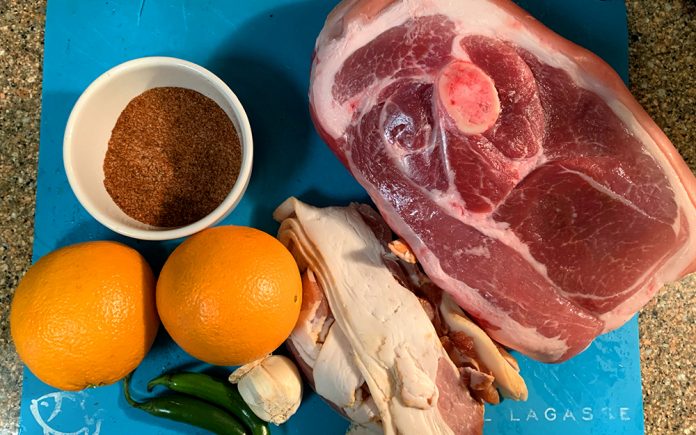 You ever have those Johnsonville Brats? You know, those fearsomely fleshy and phallic, pink and white tubes of German-engineered goodness? The first time that I ever steamed those in beer, I was pretty convinced that I’d just replaced Guy Fieri as the mayor of Flavortown, because that combination was culinary alchemy. That’s right, I’d turned Budweiser and a tube steak into a thing that elevated both individual flavors into the stratosphere. That, ladies and gentlemen, was the first moment I’d ever cooked with beer, and I’ve come a long way since those simpler times. This past weekend, I created my first ever batch of beer sausages, but it was rough. Painful even. No one told me that stuffing intestines full of raw meat would be so messy. By the time I was done, my place looked like The Texas Chainsaw Massacre.

The best part about cooking is coming up with flavor combinations that balance salts, fats, acids, and sugars. Thinking of the different flavors that hops can impart on an IPA inspired me to create a sausage recipe with flavors of citrus, garlic, fruit, and spices. For citrus, I chose Valencia oranges and Persian limes. For fruit, I included serrano peppers into the recipe for their bright, vegetal, and very green flavor. The spices included coriander and smoked paprika, with touches of allspice and nutmeg for warmth. The meat of choice was pork, and the liquid to moisten and bind all of the ingredients together was, of course, an IPA. Firestone Walker’s Luponic Distortion #14 to be exact. This beer showcases hops with flavors of mandarin orange, white grape, and passionfruit, and might be one of my favorites in the Luponic Distortion series so far.

I have the 4th edition book of Home Sausage Making, which I kind of skimmed through in hopes of absorbing the information through osmosis. I’ve never been someone to read a manual cover to cover, choosing to learn through hands on experience instead. Turns out, I really should have read the manual. 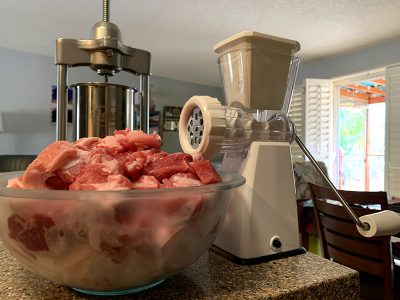 It’s recommended that your ground meat contain at least 20% fat to keep your sausages from becoming dry and crumby when cooked. The pork shoulder that I used had a respectable rind of fat on it, but it didn’t look to be 20% of the cut, so I had a butcher give me a package of the fattiest bacon he had. I carved the pork roast into big cubes of meat, chopped the smoked bacon fat, and stuck them both in the freezer for a bit to firm up the texture before grinding. My grinder is clear plastic so you can see what’s going on in the mechanisms, and it is fascinating. In the grinder is a giant screw called a pusher that threads the meat from the hopper to the blade, you can watch every fiber of sinew and gristle stretch and deform as its forced through the see-through barrel and towards the rotating blades. The grinder clamped to the counterspace, your dominant arm rotating a crank, the chilled meat and fat is cut into tiny pieces before being forced through a ringed plate, creating noodles of flesh. Meat spaghetti. Angel hair pork-sta. The squishing and soft popping sounds coming the grinder as this happens has been known to turn some individuals into vegetarians. 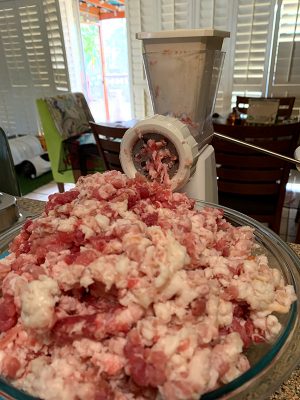 The one chapter of Home Sausage Making that I did read advised that you should add all of your dry spices and solid ingredients to the freshly ground meat, so in went my pureed orange and lime zest, in went an entire bulb of garlic. In went carefully measured spoonfuls of Himalayan salt, smoked paprika, coriander, cumin. In went the precisely documented ounces of orange and lime juice. An entire bottle of Luponic Distortion #14 IPA. Wearing plastic gloves I kneaded and mixed the slurry until it was a thick and firm pulp of meat and spices. And then, wondering what to do next, I opened my copy of Home Sausage Making and saw that under no circumstances should you ever add your liquids to the mixture before running it through the grinder for a second time. I looked at the chunky, hop-scented meat-paste that I’d created and thought to myself “…shit. I really should have read the manual.”

It was here that everything started to fall apart. Literally.