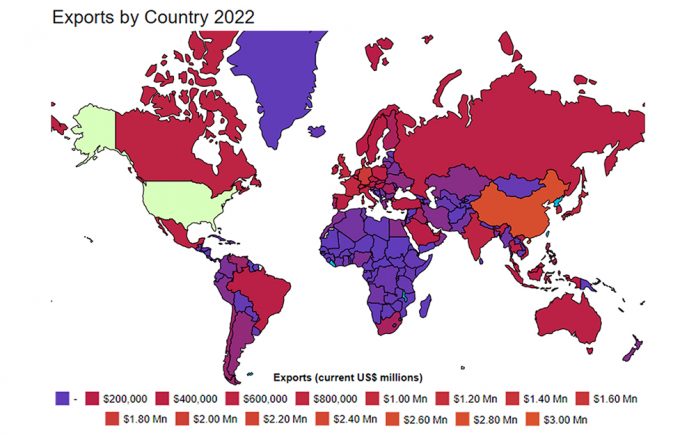 Unless you have a very affluent family member who keeps you housed and fed, you and I have to produce more than we consume in order to get by.   This analogy can apply to us, a family member or a country as all are bound by some basic economic ideas.  As you and I know, it does not matter how much you earn if you have a hole in your pocket and spend more than you earn.

China is the world’s top exporter led by computers and cell phones.  Electronic equipment and consumer products are other areas where China excels.

The United States in the second largest exporter.  While we are best known for Hollywood and school shootings, refined oil products are our top export.  Other leading exports include high-end semiconductors, pharmaceuticals, medical devices and technology.

Countries like Canada and Russia are top raw crude exporters while Germany, Japan, the United Kingdom and Spain have vehicles as top exports.

While the United States is one of the world’s top two economic engines, we are diametrically opposite from China in that we consume more than produce.

Using pre-COVID data from the World Bank, the United States had the largest net trade deficit at nearly $500 billion.  All indications suggest that the deficit has grown substantially over the last two years higher than that today.

By tightening the money supply quickly, the Federal Reserve is trying to cool demand which they hope will slow inflation.  Given tight oil and grain supplies globally, two of the greatest drivers of inflation seem somewhat immune to this monetary approach given the supply and demand imbalance.

Other notable countries consuming more than they produce include the United Kingdom, Brazil, Canada, India and France.  This may be one of the reasons why India is willing to buy Russian oil despite global pressure to join in sanctions against the Putin-led country.

The top net exporters prior to the pandemic were Germany, Japan, China, Russia, South Korea and Spain.

Given sanctions, we can assume that Russia is now a net importer.  Given that vehicle sales should suffer as a result higher energy prices and a weakened consumer, we should expect Germany, Japan and Spain to see their net importer status erode significantly.

For China, the impact of its ‘no COVID’ policy is causing problems throughout its economy.  China’s health policies area straining supply chains globally as China has become a less reliable and increasingly unpalatable delivery source.  Many companies are quickly shifting production to other more reliable and less controversial manufacturing centers like Vietnam.

What about food security?  While the United States may have a spending problem, we are not ‘food insecure’ like many parts of the world. Large parts of our population are food insecure, but it is not for a lack of food on the shelves, baby formula withstanding as the United States is one of the world’s largest food producers.  It is the countries that are unable to produce the food needed to sustain the population are food insecure.  Afghanistan leads this list along with most African countries and parts of the Middle East like Iraq, Syria or Yemen.

As with most things in life, those without the means to pay for price increases will go hungry.  Around the world, this will lead to starvation and greater political turmoil.  Here stateside, in addition to the suffering caused on those who can afford it least, higher prices are certain to impact mid-term elections in November.

Haddon Libby is the Founder and Chief Information Officer of Winslow Drake Investment Management.  For more information on his services, please visit www.WinslowDrake.com.