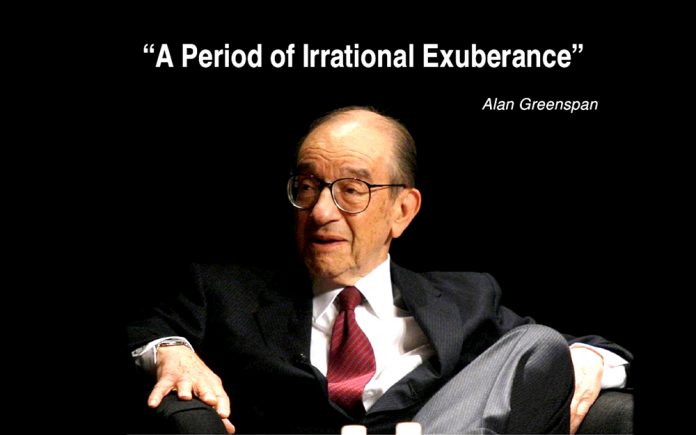 As stock market indexes reach historic highs, a reasonable investor might wonder if we have reached a point of irrational exuberance.  Irrational exuberance is the point where people invest in things where they cannot reasonably justify the price that they are paying.  The phrase was coined by once-upon-a-time Federal Reserve Board chairman, Alan Greenspan, when discussing the dot-com bubble in December 1996.  The dot-com bubble occurred between 1994 and 2000 when investors speculated wildly about the growth of the Technology and use of the internet.  Using the Dow Jones Industrial Average (Dow) as the guidepost, stock prices peaked at the start of 2000 when the Dow reached 11,522.  Two years and nine months later, the dot-com crash resulted in the Dow being 34% lower at 7,528.  It would take four years for the Dow to recapture 2000 highs.

Most of us remember the Great Recession all too well.  The Dow peaked at 14,066 at the start of October, 2007.  Rampant mortgage fraud and other irresponsible lending practices were a contagion that led to the Dow crashing 52% to 6,627 only 18 months later.  Like the dot-com crash, it took four years for the Dow to recapture its 2007 peak.

Looking over the last five years, the recovery from The Great Recession led to generally improving prices through May, 2015 when the Dow reached 18,232.  The Dow essentially went nowhere for the next 18 months.

Looking at 500 of the largest companies in the United States as represented by the Standard & Poor’s 500 (S&P 500), the most valuable company in the world is Apple and it represents 4.6% of the entire worth of those 500 companies.

To put this in some perspective, Apple has a higher valuation than the Gross Domestic Product (GDP) of all but 14 countries.  For comparison, Apple’s value is about the same as the GDPs of Australia, Spain, Mexico and Saudi Arabia.  Apple’s value is more than the ENTIRE energy sector in the United States.

Is Apple worth it?  Independent rating service CFRA seems to think so.  With annual revenues of $260 billion, operating income of $64 billion, net income of $55 billion and a valuation of approximately $1.35 trillion dollars, CFRA believes Apple is undervalued by 10%.  Independent rating service disagrees and believes that the fair value of Apple is 30% lower than current prices or $950 billion.

While these high valuations may be defensible as an investment due to historically low interest rates and good economic prospects for 2020, investors should review their stock holdings and reallocate where valuations seem extended.  Whether Apple or another stock is too richly valued, investors should remember that the greater risk is when interest rates rise, and assets of all kinds begin to reprice.

Not sure how to assess the value of your investments?  Drop us a note and we will give you a hand.