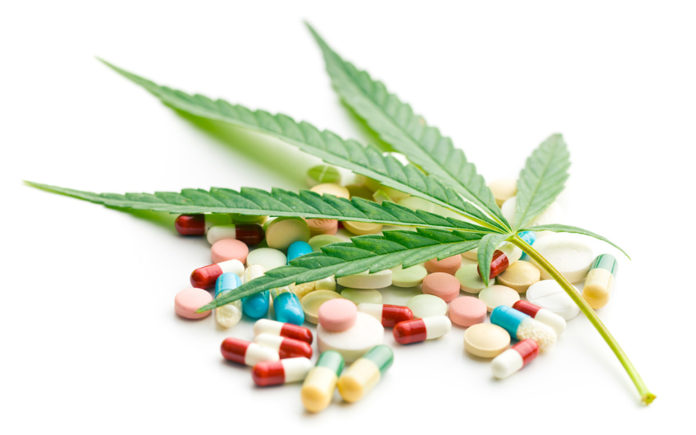 As a nurse one of my responsibilities when assessing patients is determining drug interactions. Computer programs in hospitals and clinics have built in medication hot buttons that bring up possible drug to drug interactions. Physicians are then notified to determine if the new drug needs to be changed or that the interaction is nonconsequential. Drug-to-drug interactions can cause serious side effects. For this reason, patients should share with their medical providers if they are taking cannabis/marijuana.

There are three main ways two drugs can interact. Metabolic interactions, where a drug can reduce, intensify or prolong a side effect later, how the second drug is absorbed and distributed throughout the body and lastly by convergent pathways, (i.e. cannabis and a specific drug may work through similar biological pathways which leads to synergy—making it work better, or antagonistically by producing an opposite effect).

Every new drug must test drug interactions prior to receiving FDA approval. The enzymes in the body that synthesize anything ingested are all in the CYP, pronounced “sip” family. Cannabidiol (CBD) inhibits or slows the metabolism of the CYP1 family when given 20 minutes before the second drug. The timing of applying 9deltahydrocannabinoid (THC) and cannabinol (CBN) does not slow its metabolism. High concentrations of CBD or THC can boost the production of these enzymes a day later.

In the liver, CYP1 enzymes metabolize caffeine, melatonin, and several pharmaceuticals. Whether CBD is inhaled or ingested, drug interactions with CYP1 are less likely if CBD is administered after the other drug. A cannabis-infused edible may also slow drug metabolism, which in the case of THC could intensify and prolong the effect of caffeine, for example.

The CYP2C enzymes metabolize many antiepileptic drugs, phytocannabinoids (including THC and CBD), and some endocannabinoids, as well as non-steroidal anti-inflammatory drugs, warfarin, diazepam, and other pharmaceuticals. Individuals with less functional CYP2C enzymes, due to personal genetics, are likely to experience more significant cannabinoid-drug interactions and at lower doses, as the THC has a more varied effect on drugs metabolized by CYP2. CBD isolates like Epidiolex have caused significant interactions with anti-epileptic drugs, whole-plant extracts generally have not.

The CYP3A family is perhaps the most significant group of CYP enzymes as they metabolize approximately 30 percent of all pharmaceuticals and are distributed in the intestines and liver. Grapefruit’s potent drug interactions are due to its dual inhibition of intestinal and liver CYP3A4

The CYP2B family metabolizes a variety of chemicals, including many pesticides, valproate, methadone, ketamine, and anesthetics. CBD changes the 2B enzymes inhibiting the ability to metabolize the drug. CYP2D6, metabolizes many opiates, antipsychotics, and antidepressants (both tricyclic antidepressants and SSRIs).

Oral-mucosal administration, if taken correctly, are absorbed through membranes in the mouth (under the tongue and along the cheek) without swallowing. When administered sublingually, cannabinoids aren’t immediately processed by the liver—like ingested drugs—but neither do they go directly to the brain and heart—like inhaled drugs. They are just absorbed into the bloodstream. With topical administration there is no potential for drug interactions as the cannabinoids do not enter the blood stream only the skin and joints.

How dangerous are cannabinoid-drug interactions? To the extent that there have been issues with adverse drug interactions, these have involved high doses of CBD isolates. Yet it is precisely hemp-derived CBD isolates that proliferate online and in gas stations and food markets throughout the United States. Moreover, CBD isolates, unlike whole-plant extracts, generally require higher doses to be effective.

Visit https://www.projectcbd.org/how-to/cbd-drug-interactions to obtain more information in English or Spanish on drug interactions.

Ruth Hill consults and lectures on medical cannabis. To make an appointment go to www.holisticcaring.com