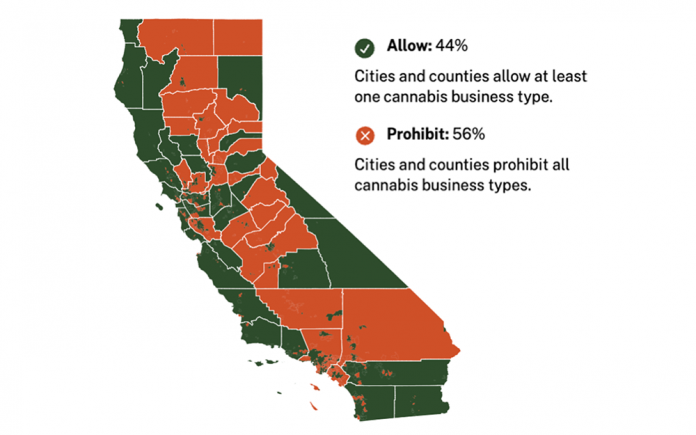 Cannabis use is legal in California. But cities and counties can prohibit cannabis businesses, like retail, from existing. The Department of Cannabis Control website notes that the state is a patchwork of areas where it is and is not legal to establish a cannabis business. Can the residents of Indian Wells or Ranch Mirage purchase cannabis in their cities? No.

If cannabis is legal in the State of California, why is it prohibited in 78% of the cities in the state? There are 235 out of 539 (44%) cities prohibiting the testing of cannabis. Fifty-six percent (304/539) of cities and counties do not allow any cannabis businesses. Sixty-two percent (334/539) do not allow any retail businesses.

Cities may have different rules than Counties

Some cities and counties license a type of cannabis business, but also put restrictions on it. For example, they may limit the number of businesses that can get a license. Due to these limits, there are 4.5 retail licenses per 100K people in California (as of July 2022). Alcohol, which is more dangerous than cannabis, is ubiquitous. It is in every restaurant and grocery store. So, what do we do to fix this morass of conflict between the state vs the cities, or the state vs federal laws?

The California legislature has SB 1186: Medicinal Cannabis Patients’ Right of Access Act, scheduled for a hearing in the appropriations committee on August 11, 2022. This bill would “prohibit a local jurisdiction from adopting or enforcing any regulation that prohibits the retail sale by delivery within the local jurisdiction of medicinal cannabis to medicinal cannabis patients or their primary caregivers by medicinal cannabis businesses.” Call Senator Anthony Portantion, the chair of the appropriations committee at (916) 651-4025 and express your opinion.

The non-partisan National Conference of State Legislatures (NCSL) has voted to adopt a revised policy directive that expresses support for federal marijuana descheduling and cannabis banking reform. In addition, the directive calls for changes in federal law that would allow for robust cannabis research and access to traditional banking. Currently, in the US research on humans is prohibited.

Under federal law, cannabis businesses in states that have legalized the sale of cannabis are unable to utilize the country’s banking system, forcing them to operate as primarily cash-only entities. The NCSL urges Congress to pass legislation allowing financial institutions to provide banking services to legitimate state-authorized cannabis-related businesses. This reliance on cash makes cannabis businesses prime targets for theft, burglary, armed robbery, and other property crimes.”

Another path to mitigate this morass is for residents to become active in local politics. When is the last time you called your city councilmen? Do you even know who your councilmen or mayor is? I am embarrassed to say I do not. This I think is disgraceful. I believe in the power of citizen activists. If you live in a city or county that prohibits cannabis businesses, call your mayor, supervisor, or councilmembers, and voice your discontent. The only way change happens is when we demand change. Even if California SB 1186 passes, there will be mayors who persist in defying the law. Our voices need to be louder than the prohibitionist.

In summary, cannabis is both legal and illegal in California. The only way to change this is for the silent majority to wake up and become active in local politics.

Yours truly will be presenting medical cannabis education to the public at The Vault Dispensary and Lounge in Cathedral City, time, and date TBA. Call The Vault at 760-866-9660, to sign up in advance.