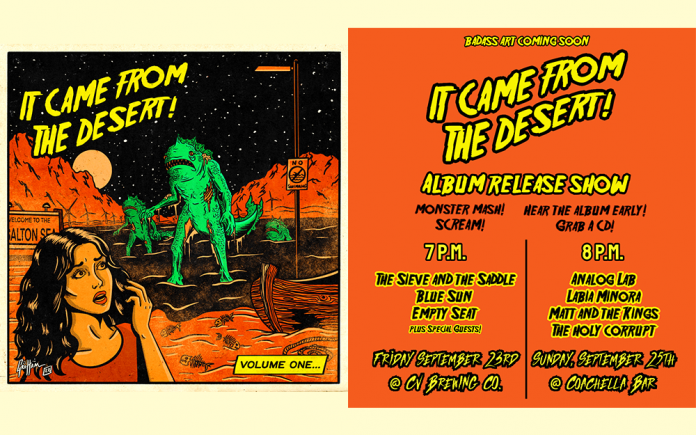 Conceived in the mind of local musician and journalist, Matt King, “It Came from the Desert!” is a compilation of completely original Halloween themed songs written and recorded by local artists. With a wide variety of musical styles and genres, this album is sure to have something for everyone and for those of us who love Halloween, it’s always great to have options beyond classics such as Monster Mash and Thriller.

King: “I have always been a fan of compilation albums and my friend, Derek Timmons (Sleazy Cortez, Throw the Goat, Grins & Lies), did a really great one for Christmas. Halloween is my favorite holiday and I think the music is much better but there could always be more. I decided to see if I could wrangle some of my favorite bands together to see if we could make it happen, which we did. We will have CDs and it’s definitely real.”

King continues: “Two separate release shows are going to happen for the album. The genres of the bands on the album are pretty spread out so I wanted something for the more alternative bands and something for the heavier bands. The alternative show will be Friday Sept, 23rd at Coachella Valley Brewing Co. with, “The Sieve & the Saddle,” and a debut performance from my new surf band called, “The Salton City Surf Club” which is featured on the album. We will also have “Blue Sun” and “Empty Seat” playing sets at that show. On the 25th at Coachella Bar we have, “Analog Lab,” “Labia Minora,” “Matt and the Kings” and “The Holy Corrupt.”

CVW: “Let’s be honest, Matt. You are a guy that had an idea and basically invited a bunch of your friends and acquaintances to join in and create something having no idea what they would come up with. How do you think they did?” 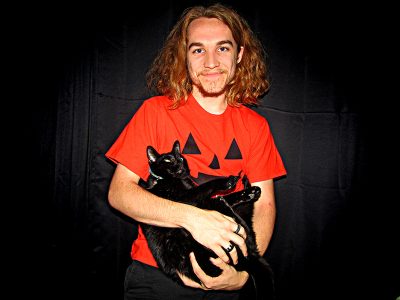 King: “I was actually really impressed by the seriousness with which everyone took the idea. Initially, I just thought of it as a passion project and I wasn’t sure if I was going to get enough submissions to fill a whole album but, sure enough the songs started coming in and they were mixed and mastered and sounding great. Super dope tales of funky swamp creatures and all kinds of cool stuff. In the end, I knew that I really picked the right people because they created some pretty bad ass songs and essentially turned my dream into a reality. And from what I hear, they had a really good time doing it so it was a pretty cool win/win for everybody.”

There will be CDs and posters available at the release show. “It Came from the Desert!” will be available for streaming on all platforms on Oct, 1st.