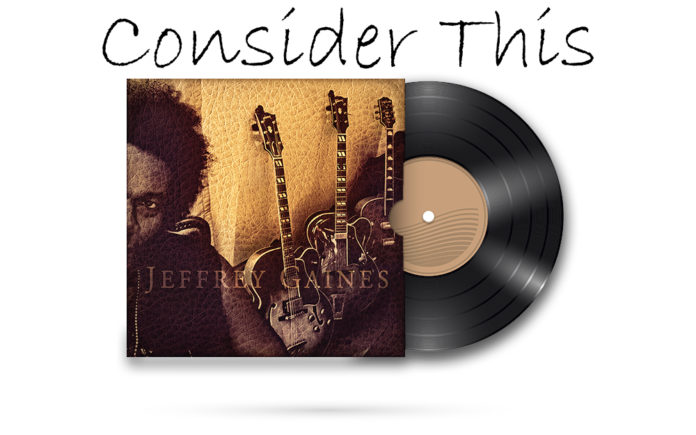 “I’ve reached out, I’ve been well received just as much as I’ve been rejected/And in the scheme of things I’ve got more than I need but sometimes I feel neglected.”

That’s Jeffrey Gaines kinda-sorta accepting his relatively low profile in the music business on “Thick And Thin” a song from his excellent new record, Alright.

Jeffrey was born in 1966 and grew up in Harrisburg, Pennsylvania. Growing up in his African-American household, the soulful sounds of ‘60s and ‘70s R&B, were ever present. Naturally, (despite their inherent grooviness), he rejected his parents’ records and became an avowed Anglophile.

He embraced British Invasion stalwarts like the Beatles and the Kinks, he also explored the nascent genres of Punk and New Wave.  Holed up in his bedroom, he absorbed those sounds. Elvis Costello, XTC, Nick Lowe and the Jam were early touchstones, along with David Bowie and John Lennon.

An artistic kid who studied painting and drawing, he honed his chops fronting local Harrisburg bands throughout his teens and early 20s. Although they mostly concentrated on cover songs, Jeffrey was already writing his own music. In the late ‘80s he received an offer to join the up and coming Alt-Punk-Funk band Maggie’s Dream, but by then he was set on a solo career. Relocating to Philadelphia in 1990 he inked a deal with Chrysalis Records.

When his self-titled debut arrived, Grunge and Alternative Rock were the era’s musical Lingua Franca. Jeffrey’s music never capitalized on prevailing styles. Instead, he followed his muse as a singer-songwriter, crafting a collection of sharp and erudite songs. Although he received plenty of critical acclaim, the album never broke through commercially. That pattern repeated with his sophomore effort, 1994’s Somewhat Slightly Dazed, excellent reviews never translated into album sales.

Switching from Chrysalis to the more artist-driven label, Rykodisc, his third album, Galore was released in 1998. The music community took notice of his talent and Jeffrey was invited on big tours, opening for heavy hitters like Melissa Etheridge, Sting, Tracy Chapman, Tom Petty, Shawn Colvin, Joe Jackson and Stevie Nicks. This raised his profile considerably, but radio airplay remained elusive.

His commercial breakthrough came rather unexpectedly, following the release of his fourth album, Always Be in 2001. Although the record featured a plethora of original songs, it also offered up a soulful version of Peter Gabriel’s “In Your Eyes.” Radio programmers latched on to that track and the album began to climb the charts. He capitalized on his new-found success, releasing his fifth studio effort, Toward The Sun in 2002 and Jeffrey Gaines Live two years later.

Although his eclectic musical blend has endeared him to fans and discerning critics, most record labels couldn’t figure out how to market his talent. In the 15 years since his last studio album, he has continued to cultivate his passionate fan base mostly through relentless touring. Recently he signed with Omnivore Recordings and they suggested he work with protean producer/singer-songwriter Chris Price. The result is his sixth long-player, entitled Alright.

The album opens with “Feel Alright,” and it envelopes the listener liked a comfortably frayed jean jacket. Willowy pedal steel notes crest over supple acoustic riffs, loping bass and a ticklish back-beat. Jeffrey’s vocals are equal parts honey and wood smoke, as he patiently reassures an ex, that he still cares for her and only has her best interests at heart; “I’ve been fine, go home and start anew, leave me to tie up those loose ends for you/I stand by and watch the embers die and bury them deep down so you may fly.”

Of course, themes of love and loss permeate this record, but three tracks tackle social hypocrisy, the status quo and self-preservation. On “I Will Be” gilded guitar riffs glide over hopscotch piano, roiling bass and a chunky rhythm. Here he addresses society’s need to tamp down individual thought. Completely comfortable in his own skin, he asserts “There will no retractions, I’ve meant all I’ve said and I’ll speak my mind ‘til the day I’m dead/I won’t be silenced by fear, shame or doubt…I won’t hide.”

“Frowned Upon” blasts out of the speakers like a long lost Big Star stomp. Swaggering bass lines and a crunchy beat buttress whiplash guitars and icy keys. Layered vocals offer Beatlesque oohs and ahhs as slightly cryptic lyrics detail a physical attraction that rebels against convention. (Turns out Roxy Music was right, “Love Is The Drug”).

Meanwhile, the aforementioned “Thick And Thin” sort of makes peace with the fickle nature of the Music industry. The anthemic melody is powered by jangly guitars, thrumming bass and a propulsive beat. Assessing his strengths and self-admitted foibles, he looks toward the future with a measure of optimism; “Well, I know where I’ve been, but who knows where I’m going, who knows how much longer/And I’ve been through thick and thin, my battle scars are showing, hope I’m growing stronger now.” A spiraling guitar solo underscores his resolve.

Two tracks break away from the album’s Power Pop/Post Punk paradigm for a more bucolic Country Rock sound. “Firefly Hollow” is a rustic charmer that blends bottle-neck electric riffs, sunshiny acoustic licks and clackity percussion. Here Jeffrey slips into the skin of a laid back lothario, admitting “… Adventurously I go where I’m lead, listening to my heart and not my head.”

The best songs here, “Seem To Me” and “Promise Of Passion” echo early musical mentors like Elvis Costello and the Jam’s Paul Weller. On the former, Byrds-y 12-string guitars ebb and flow over vrooming bass lines, a kick drum beat and pulsing Farfisa notes. The sunny, mid-tempo melody belies soul searching lyrics; “I’ve been hearing all these all outside voices and they would have me question this, but they give no answers in return/I’ve begun listening to my own voice, and I’m sure I can believe in it, maybe it’s never too late to learn.”

After a raucous rollercoaster ride the record closes with “Children’s Games.” A tender encomium that celebrates the tricky intersection of love and desire. The sylvan melody is swathed in gossamer strings, as acoustic and electric guitars intertwine with grace and gravity. It’s a quiescent end to an elegant album.

Alright was recorded in Los Angeles. At Jeffrey’s request, most of the instrumentation was provided by Jackshit. A Countrified Power Trio, the band includes the rhythm section from Elvis Costello’s Imposters; bassist Davey Faragher and drummer Bruce Thomas, along with guitarist Val McCallum who has played and toured with Bonnie Raitt, Jackson Browne and Lucinda Williams.

Ultimately, the triumph of Alright belongs to Jeffrey Gaines who has crafted a cogent set of songs that are simultaneously fresh and familiar, intimate and universal. A stalwart presence in the music industry for more than a quarter of century, this album offers him his moment in the sun.

In a perfect world, women would be in charge of everything, Man-buns would be outlawed and Jeffrey Gaines would be a musical superstar. Alright is the first great album of 2018.