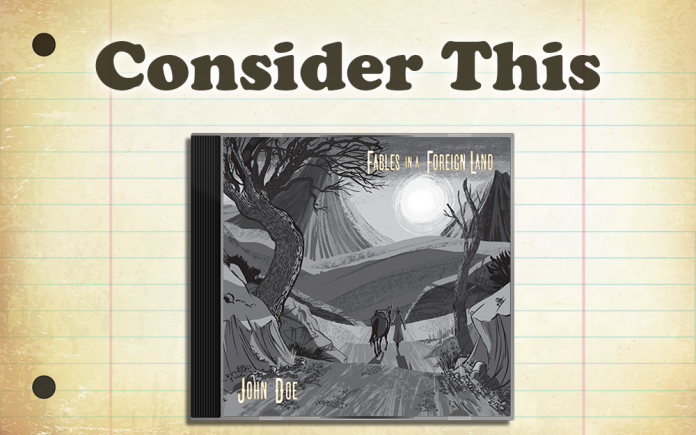 John Doe has a beautiful voice. There, I said it! Soulful, heartfelt and roughhewn! Maybe no one really noticed the true majesty of his vocals because he began his career over 40 years ago fronting X. Formed in 1977, the seminal Los Angeles Punk band established a sound that was equally fast and furious, lyrical and nuanced. A recent Baltimore transplant, John (ne’ John Nommensen Duchac) connected with guitarist Billy Zoom (born Tyson Kindell) through an ad in The Recycler, a free local paper. During band practice, he brought along his girlfriend, budding poet Exene Cervenka (formerly Christene Lee Cervenka). By the end of that practice, she joined the band, (the couple married in 1980). The line-up was made complete with the addition of ex-Eyes drummer, Donald “DJ” Bonebrake.

One of the first bands signed to Slash Records, they released their trailblazing debut, Los Angeles, in 1980. X quickly followed up with their equally impressive sophomore effort, Wild Gift in late 1981. Embraced by critics and fans alike, their hometown popularity resulted in a major label deal with Elektra Records. Continuing their winning streak, they released 1982’s Under The Big Black Sun, and 1983’s More Fun In The New World. All four albums were produced by Doors keyboardist Ray Manzarek. It felt as though he was passing the L.A. music torch to the next generation.

X went beyond the confines of Punk. Initially, their sound was characterized by short, sharp songs accented by nihilistic, doom-tastic lyrics. Soon enough, they began incorporating Rootsier styles like Rockabilly, Folk and Country. The lyrics, written by both John and Exene, touched on real world concerns like poverty, addiction and politics. Their dissonant vocal harmonies positioned them as the George Jones and Tammy Wynette of Punk. Although X was the first Punk band to headline the Greek Theater, commercial success eluded their grasp. John and Exene divorced in 1985 After six studio albums and a blazing live set, the band took a break at the dawn of the ‘90s. This allowed each member to sew some artistic oats. John immediately jump-started a solo career. He also embarked on an acting career, landing roles in films like Border Radio, Great Balls Of Fire, Georgia, Boogie Nights and The Good Girl. His self-titled debut arrived in 1990, in the ensuing years he has released nine solo records, as well as collaborations with Jill Sobule, The Sadies and Exene.

Meanwhile, at the turn of the 21st century, X reconvened and have been on the road ever since. Their current audience is a healthy mix of OG Punks and millennials. In 2020, X just surprised the shit out of everyone by releasing a new album, 17 years after their last, and 40 years after their debut. Alphabetland was exactly what longtime fans and new acolytes had hoped for: snarly, smart, cutting and sublime.

The record opens with a gust of blustery wind, instantly transporting the listener back to another place and time, before folding into “Never Coming Back.” Driving acoustic guitars (which echo the Spanish-flavored strumming that exemplified Love’s stunning Psychedelic masterpiece, “Maybe The People Would Be The Times, Or Between Clark And Hilldale”) collide with slapdash bass lines and rumbling backbeat, before kicking into a sly shuffle rhythm on the chorus. Co-written with Texas legend and Outlaw Country progenitor, Terry Allen, the lyrics paint a vivid portrait of a young Indian boy attending his parents’ funeral. The boy astutely acknowledges that manifest destiny has put ma and pa in their graves; “With a mask upon his face, and whiskey for a knife, you could steal my faith, or show me Jesus Christ.” His sadness is laced with defiance and determination as he vows to break away from; “the darkening of light, or the memory of that night, they’re never coming back to the screaming of the wind, or the ghosts of them again, they’re never coming back, I’m never coming back.”

On a couple of tracks John summons his inner Man In Black and the results are pretty Cash-tastic. “Travelin’ So Hard” is powered by a frenetic “boom-chicka-boom,” the style patented by Johnny and his backing band, The Tennessee Three. Jittery bass notes dart between rollicking guitar and a freight train rhythm. A cowpoke on the move rides hell-for-leather, dreaming about some liquid libation. Once his thirst is quenched, things go suddenly awry; “He fell off his horse, as drunk as he could be, yeah he fell off his horse, and nobody laughed but me/That mare didn’t care, one way or the other, she’d been travelin’ hard.” Plucky guitar licks take flight on the first break, the second spotlights thunky upright bass runs as the tempo accelerates wildly before collapsing in a heap.

Meanwhile, “The Cowboy And Hot Air Balloon” is a bit of Wild West apocrypha anchored by galumphing bass lines, a walloping snare drum kick and jagged guitar riffs. John’s wicked grin is barely is barely contained, as he spins this colorful yarn; “He stepped out of a bar and into the street, when a hot air balloon swept him off his feet…” once he settles into the basket and begins to enjoy the ride, the cowboy realizes altitude is the least of his problems; “He figured he was safe, ‘til he saw a toothy grin, there was a grizzly bear straight across from him, ‘I’m not here to harm you,’ he growled through his teeth, ‘I’m just here to take you home and offer some relief, if you can only face your fears and take me by the paw, I’ll show you to the kingdom where the turquoise water falls.’ It doesn’t end well; “Hand and paw united, he was crushed by the the embrace, he smelled the earth and tasted sky, as het let go of the human race.” Eeesh. Who could’ve predicted a drunken cowboy would have been swept away by a rogue balloon, only to meet his fate following an enthusiastic bear hug?

On the latter, swoony, Norteno-flavored button accordion is matched by courtly guitars, slippery bass and a rat-a-tat beat in ¾ time. The buoyant melody and fluttery accordion nearly camouflage pointed lyrics that assert witnessing a crime is as bad as perpetrating one; “We came into town to watch some ponies race, we spoke not a word, when a master whipped a slave/There was blood upon his back, he was trembling inside, we turned away from the terror and fright.” Silence equals complicity as the song turns introspective; “Who do you serve, do you serve yourself, open your eyes and save somebody else.”

This record is perfect, front to back, but three tracks stand out. “Sweetheart” is a tender encomium to a paramour, freshly released from prison. Jangly acoustic guitars lattice atop sturdy bass lines and a cantering beat. John’s comforting croon wraps around lyrics that reassure “Sweetheart will sleep good tonight, resting by the fireside, I’ll wash her feet and hands, polish them with sand, sweetheart will sleep good tonight.”

“After The Fall” is a bit of a cracked Country Waltz, accented by see-sawing guitars, loping bass and a tumbling beat. Lyrics offer a poignant narrative from a Native perspective; “In a generous land came thirsty people, they drank the rivers and left the fish to die, they cried they were hungry, they were thirsty/They were lonely and cruel, self-righteous, relentless, they were fearful and vengeful, insatiable.” John’s plaintive tone is contradicted by thrashy acoustic riff-age.

Finally, “Destroying Angels” is a crafty collaboration between John, the indie band Garbage, and his forever partner in X, Exene Cervenka. An elastic little Rocker, the lithe melody is matched by fluttery guitars, agile bass and a propulsive rhythm. Here, John effortlessly slips into the skin of a sadistic killer who murders for love; “Some days they are so shameful, no words for them exist, everyone was tearful when they laid her in her crypt/I stood by the graveside, in my Sunday Best, my sins and all my secrets burned like fat inside my head.” Sugary acoustic guitars bookend each grisly revelation, irresistibly hook-driven, it’s the catchiest murder ballad ever.

The action slows on “Missouri,” John’s lonesome vocals soar an expansive melody that features a sweet pas de deux between fiddle and guitar on the break. John repurposes “There’s A Black Horse” which originally appeared on his 2005 album, “Forever Hasn’t Happened Yet.” His weatherworn rasp is suitably sepulchral as hushed guitar and brushed percussion coil around this pensive lament.

Other interesting tracks include “Down South.” The sunny melody and buoyant arrangement, fueled by plangent guitars, lowing fiddle and a whipcrack beat, belies a lonesome story of a broken old man. The willowy “See The Almighty” is a sharp rebuke of religious zealotry. The album closes with the bare-bones “Where The Songbirds Live.” A bit of a restless farewell, it wraps braided acoustic guitars around thrummy bass and a martial cadence. John wistfully concludes “this world breaks your heart, evil and mean.” It’s a desolate finish to a stellar record.

I was an X fan from Wild Gift on, but the snarl and grit on songs like “We’re Desperate” or “In This House That I Call Home,” didn’t spotlight John’s sublimely soulful vocals. I didn’t really discover the agility and fragility of his voice until he covered Merle Haggard’s “Silver Wings” as part of The Knitters. (The band was a side project featuring most of X, their debut, Poor Little Critter On The Road, arrived in 1985). There’s an ache and a purity to his sound that has only ripened with age. On Fables In A Foreign Land his voice cloaks each song like a frayed, faded and familiar jean jacket. The record takes the listener back to a simpler place and time, when life was just as tough and complicated as it is today.