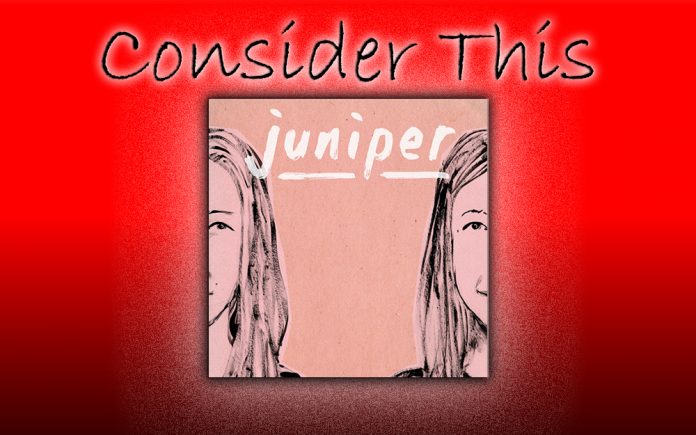 The old “Nature Vs. Nuture” has been debated since ancient Greece, (and no, this ancient Greek wasn’t around then). But in the case of Juniper, there’s an argument to be had for both positions, with no easy resolution in sight, and that’s okay. This 15 year-old wunderkind displays a kind of innate musical talent that can’t be taught, luckily, she has grown up in an environment that encouraged those artistic gifts.

It seems as though Juniper Shelley practically leapt out of the womb making music, since she grew up in a musical household, the whole “chicken-and-egg” metaphor also feels wildly apropos. Juniper’s dad, Michael, is an acclaimed singer-songwriter with five albums under his belt. He’s played with everyone from Belle & Sebastian and Marshall Crenshaw to They Might Be Giants. He also hosts a weekly radio show on WMFU. Her mom, Jordon, is not a musician, but she passed on her impeccable music taste to her daughter.

Juniper started singing along and making up her own music pretty early on. By the fourth grade, she started taking piano lessons. Learning everything from sonatas to Beatles songs, she soon took up the flute and also began playing guitar. Her first tentative steps as a songwriter were under the tutelage of her piano teacher. Growing up, she soaked in the seminal sounds of bands like the Beatles, the Beach Boys, the Zombies and Fountains Of Wayne. But she also responded to 21st century musical role models like Taylor Swift.

At age nine she asked her dad if he could assist her in recording a Christmas song written for her grandparents. They repaired to Michael’s basement studio and their collaboration was a success. This began a Yuletide tradition, as she became more musically proficient with each successive year.

In 2019, she decided to explore more secular territory. Michael had spent some time observing Juniper’s male middle-schoolmates and came up with an infectious number entitled “Boys! Boys! Boys! Boys! Boys!” After sending the song out to a few radio stations, it began garnering airplay on WPRB as well as Rodney Bingenheimer’s influential Sirius radio show. Soon, it was topping the charts of Radio Free Americana.

The positive response motivated them to make a full-length album. Michael wrote several songs with Juniper providing context from a female, teenage prospective. As her dad shaped the lyrics to these specific contours, she had full veto power over anything that felt inauthentic. The creative process felt natural and organic, and the result is her self-titled debut.

The 12-song set opens with the teenage kicks of “(It All Started On The) Dragon Coaster.” Reverb-drenched guitar collides with a walking bass line and a rock steady beat. Juniper’s laconic vocals can’t conceal her delight as she recounts a rollercoaster romance; “Last day of summer, I saw him down the shore, we walked on the beach, but I just wasn’t sure/Squared off at Skee-Ball, and he got the beat, on the Mighty Mouse I flew out of my seat, got whiplash on the bumper cars, rode the whip and I saw stars.” Guitars duckwalk on the break, supplanted by swirly Hammond B3.

The latter is an elastic Rocker powered by a rat-a-tat beat, hopscotching bass and stripped-down guitars. Lyrics unspool the time-worn saga a nascent band honing their chops in the garage; “The kids on my corner wrote a song, it’s not that good but it’s not that long, pretty soon they’ll write some more/Sometimes they still forget to close the door or do their chores, take out the trash, I love to hear the drummer bash, they changed their name to The Misunderstood, Hey! I think they’re finally getting pretty good.” The jittery arrangement recalls the lean economy of Paul Collins’ Beat.

Although Juniper and her dad are armed with an arsenal of original songs, they’ve also reached out to some powerful pals and asked them to contribute material. Tommy Dunbar and Kyle Vincent from The Rubinoos offered up “Best Kept Secret.” Thrumming bass slithers over shuddery keys, angular guitars and a handclap beat. Shimmering distaff harmonies shadow Juniper as she vows to keep a clandestine crush to herself, even though “dreaming about you is taking up all my time.” The arrangement gathers speed on the break as a jangly, slightly sitar-flavored guitar solo takes center stage.

Francis McDonald, drummer for Teenage Fanclub, came through with “Punk Rock Boy.” A wall of fuzzy guitars are bookended by fluttery Farfisa organ, chilly Casio tones and a batter-ram beat. Juniper’s mien is equal parts giddy fan girl and blasé sophisticate as she explicates this kid’s appeal, “with his jeans so tight and his hair cut right.” The guitar solo on the break is Surf-y and Psychedelic in all the right ways.

The best tracks here deal with the trials and tribulations of the opposite sex. First up is the low-slung charmer, “Everybody’s Got A Crush On Chad.” Flick of the wrist, distort guitar riffs brush up against tensile bass and a chunky backbeat. Locking into a Glam-tastic groove the melody and arrangement shares some musical DNA with the Beatles’ “Revolution” and “Baby Boomerang” from T. Rex. Apparently, Chad is an enigma wrapped in a riddle; “He makes me nervous when he passes by, he’s kind of brash and he’s kind of shy, he really has a strange effect on me, just a smile and I feel feathery.”

Finally, “Sticking With My Henry” is chockful of chewy goodness. Slashing guitars, beestung bass and Shagadelic keys are wed to a prickly beat. Juniper catalogs the dubious charms of the, um, stiff competition; “Katie’s older brother is this thing named Sam he’s got a tattoo ‘wham bam thank you ma’am’…” before concluding “No thank you! I’m sticking with my Henry.” A tremelo-fied solo on the break sparks and pinwheels, underscoring her steely resolve.

Other interesting tracks include a wry take on the Three Degrees’ Soul classic, “Gotta Draw The Line.” Meanwhile, the propulsive Pop of “How Long She Gonna Stay In That Room” replicates the flange-y guitar wah wah of The Brady Bunch’s “It’s A Sunshine Day.” Even better, is the stuttery pas de deux between guitar and Farfisa organ on the break. The album closes with “I Don’t Want To Dream About You,” a bitter kiss-off is powered by Wurlitzer, electric piano, Mellotron and Farfisa and electric sitar.

Juniper’s debut is precocious, but never precious. The Bubblegum crunch melodies are deftly balanced by her vocals, which are sunny, but never cloying. There’s a coltish grace to this album that hints at better things to come. This is just the beginning.