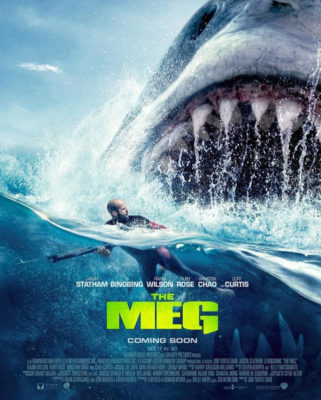 Based on Steven Alten’s 1997 bestseller, this 20-years in the making US-China co-production about a group of scientists and divers who discover and — due to a man-made environmental shift — accidentally unleash from one of the deepest trenches in the ocean  a 75-foot long prehistoric shark (a megalodon)  believed to have gone extinct 2 million years ago trapping the international team of deep-sea researchers in their submersible.

With time – and oxygen — quickly running out, Jonas Taylor (Jason Statham) an expert deep-sea rescue diver is recruited by beloved Chinese oceanographer (Winston Chao), against the wishes of his daughter Suyin (Li Bingbing), to save the crew–and the ocean itself–from this seemingly unstoppable threat. Strangely enough, it’s revealed that years before, Taylor had encountered this creature. Now, teamed with Suyin, he must confront his fears and risk his own life to save everyone trapped below. 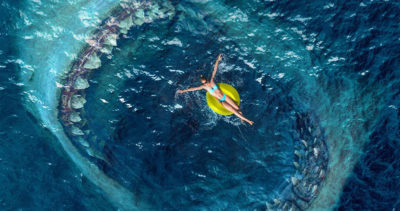 The creature was bigger and the movie a bit more serious – and funny — than I thought it was going to be. Too bad it was not even more over-the-top. But I guess there’s only so much one can do and still retain a contractual PG13 rating.

If you’re wondering, yes the shark is cool and there are some serious cinematic jolts. The 3D is effective, but seems kind of dark, however there’s good depth — especially in the money shot with Stratham confronting the gigantic shark.

No doubt there’s a bloodier sequel already in the works. Since the Bible’s “Jonah” and later Melville’s “Moby Dick,” we have embraced big fish stories both in print and on screen as a genre unto itself. 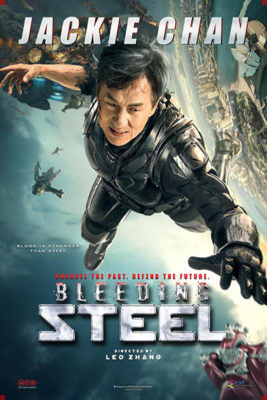 In an action-packed drama reminiscent of ’80s techno-sci-fi thrillers, Jackie Chan stars as Lin, a special force agent in modern Hong Kong is assigned to protect a scientist and his creation from a particularly menacing gang. While tracking down a deranged, mecha-enhanced villain, Lin discovers that a geneticist’s lost bio-chemical invention has been surgically implanted into his missing daughter. Wow, what a coincidence!

With the help of a young hacker, Lin connects the dots between the device that literally haunts his daughter, his enemy’s sinister army and an exceedingly strange cultural phenomenon called “Bleeding Steel.” 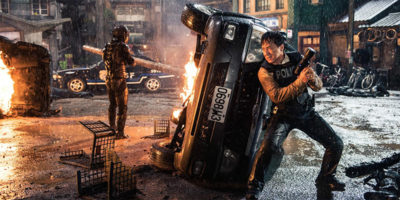 At 64, senior citizen Chan  is by far the most talented and witty athlete in cinema.

The intermittent frantic action and disparate but cool set pieces often obscure what this unnecessarily complex film is actually about. I wondered if this was intended as some kind of satirical science fiction action caper. Even so, the charismatic Chan is fun to watch in any setting or quest.  Lionsgate.