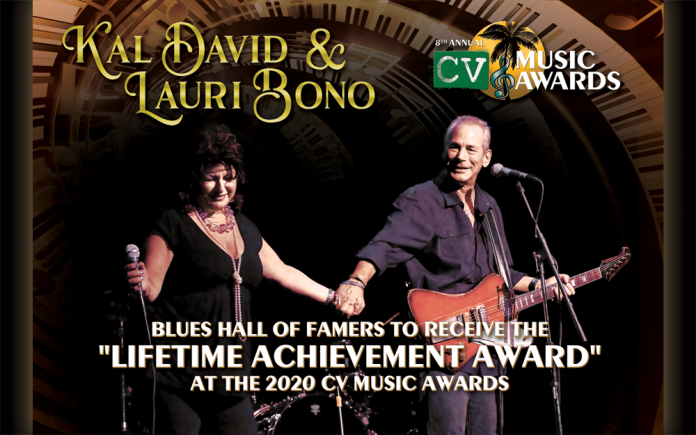 Blues Hall of Fame members Kal David and Lauri Bono have called the Coachella Valley home since the early 90’s. Originally from the Southside of Chicago, David has been referred to by the ‘Godfather of British Blues’ John Mayall as “one of the best”. While Bono, a former Harlette for Bette Midler and background vocalist for Etta James and Johnny Rivers, has become a dynamic Jazz/R&B/Blues vocalist that is the superlative counterpart to David’s wide range of musical styles. The duo travel the world when not in the desert and have become an unprecedented pair of musical and goodwill ambassadors. We are honored to present Kal David and Lauri Bono with the 2020 CVMA for Lifetime Achievement.

Coachella Valley Weekly spoke recently with Kal and Lauri to get their reactions to the news.

CVW: First of all, congratulations on receiving the 2020 CV Music Award for Lifetime Achievement. How do you feel about earning this accomplishment?

Bono: “We are too young for this honor!…No seriously, we have spent nearly all our lives in the music business and it has been all about the music, not really thinking of awards or acknowledgment, but I must say this is really nice. To be honored for our life’s work is humbling and I feel very grateful.”

CVW: You two are still actively performing and making music after such a long time in the music business. What has given each of you the incentive to keep going despite circumstances both within and beyond your control?

David: “I just really enjoy performing. I’ve found that even circumstances beyond my control can lead to the best performances. I recall one gig where I had to drive very far in the snow, and one of the vehicles broke down on the way. We had to put all the equipment and personnel in one vehicle, and because of the snow, we were late. The promoter said that since we were late he would only pay us half of our agreed price. I’m sure it was because of a light turn out because of the weather. Certainly a dismal situation, however, when we did hit the stage, we played one of the best performances ever.”

Bono: “When you dedicate your life to music, you better be prepared to roll with the circumstances that present themselves…and how to make the best out of the worst situation or if it is in our control, to make it the best it can be…Needless to say, it is something we have learned in our long journey. Kal is right, sometimes the worst situation becomes the most rewarding musically.”

CVW: What does it mean to you that you are Coachella Valley musicians who are world-renowned?

Bono: “We made our home in Palm Springs in 1991 and have never regretted it. At the time we weren’t expecting to perform here but an opportunity arose at a place called Gumbo Joe’s and we accepted the gig…it was a good decision. We still had our larger career out in the world but when we were here we could still perform. Then in 1998 we opened our own club, Blue Guitar, which was a dream of ours. It was difficult but so very musically rewarding. After Blue Guitar closed we took some time off and mainly were performing in Europe and doing assorted gigs here and there at home. That has evolved into playing here in the season and traveling and performing elsewhere in the summer, it has worked out rather nicely. No matter where we go it is always nice to come home to Palm Springs and our friends in the Coachella Valley. I would also like to mention all the amazing people we get to work with here, our Real Deal band, Jeff Lantz, Nat Scott, Bob Gross, Andy Fraga, and Jimi “Fitz” Fitzgerald, Rose Mallet, Jessica Taylor and also the other venues besides Vicky’s of Santa Fe, Purple Room Supper Club and Oscar’s.”

David: “People here in our valley likely do not realize the reaction we get nationally and internationally. Here, we are kind of a local club band, and we understand that. But when we travel it’s different. We attract large audiences and can command high fees. In recent years we’ve decided to not travel in the winter, so we are able to work locally and enjoy it. But when summer comes, we do hit the road. It is very rewarding to have both careers, our local following here and our friends and fans across the states and around the world.”

CVW: The Blues is a genre of music that combines Jazz, Rhythm and Blues and Rock and Roll. What brought you to the Blues initially and what has kept you loyal to it?

David: “When I was coming up in Chicago, I chose to be a musician. Or maybe music chose me! Anyway, there was no choosing a genre. I was a guitar player and played all kinds of gigs and was expected to be able to play it all. Along the way, in my study of music, I realized the Blues was the basis for all these genres; ‘the blues is the roots and the music is the fruits’, Willie Dixon said that long ago. I got a gig with John Mayall, ‘The Godfather of British Blues’. He was the one who discovered Clapton, Peter Green, Mick Taylor, and many others considered Blues greats. I was honored to be counted among them. And looking back to when I met Lauri, I found that we had much music in common, and most of it R&B and Blues related. We have both loved the Blues all of our lives.”

Bono: “Blues is American…it is our history. I grew up mostly listening to Rhythm and Blues. I think we got much more immersed in the Blues when Kal and I got the gig with Etta James..first of all, she was my idol from the time I was 11 years old and my friend gave me an album of hers. Working with Etta we did a lot of split bills with some of the greats of Blues, BB King, Albert King, Muddy Waters, Lightnin’ Hopkins. It was an education in the Blues and one of the highlights of our careers. The seemingly simple music (it is not simple) stole our hearts and it became a focus for us, although we still maintain our R&B roots. We love the Blues and everything it stands for. You will not find more enthusiastic or appreciative fans. Being inducted into the Blues Hall of Fame a few years ago was quite an honor…one we treasure!”

CVW: What are Kal and Lauri up to now and what are your plans for the near future?

Bono: “Right now we are sitting at home with all gigs cancelled like all of our musician friends…but hopefully Vicky’s will reopen in the fall and it will be safe by then to get back to business. We are so looking forward to resuming our Saturday nights there with the fans/friends we love…Next spring we plan to rebook the tours that were interrupted by the pandemic. We are also working on a new album that we would like to record in 2021. I am also in the beginning stages of writing my long overdue cookbook, so we are very hopeful for the future. Kal and I have been so fortunate to be on most of this journey together and we love what we do and the friends that we’ve made along the way. It’s a good life! And now, a Lifetime Achievement Award…Sweet!”

David: “We had some big plans for tours this summer and fall. Unfortunately, these are all cancelled or postponed. We are working on new songs for the album Lauri mentioned and also getting some newer material for our local shows. We’ll take songs from our favorite artists and arrange them for ourselves to perform. Receiving the honor of a Lifetime Achievement Award is a great incentive to bring more to the table. We look forward to seeing all of our friends that perform here in the Coachella Valley at the event on October 11th.”

You can purchase their music on the official website below. Also available is the excellent instructional video Kal David Blues Guitar Master Class Series and it’s offered at a special ‘lockdown’ sale price. The DVD offers instruction from basic to advanced players.