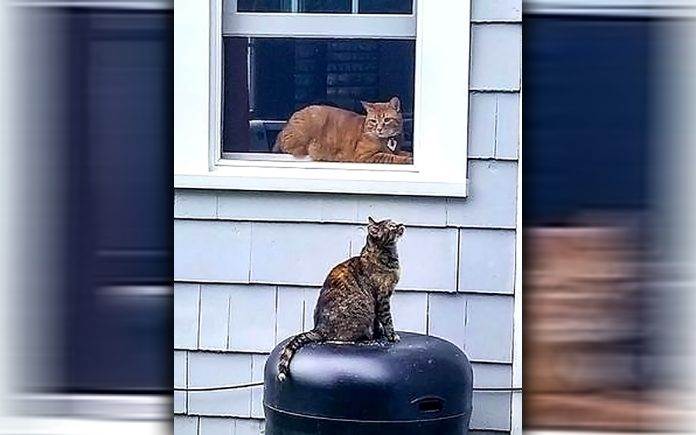 Maybe you grew up on a farm or in a rural area where cats were allowed to roam outside.  Today most cat rescue organizations will require adopters to keep cats and kittens indoors.  However, some people still think that cats are happier if they have the “freedom” to live outside, unaware of the hazards they may face.

Nothing is worse than having a beloved pet go missing and never know their fate. I just received a distraught call from a cat owner whose beloved feline lives indoors and outdoors.  After his daily several outside hours, the cat never returned back home 3 days ago. He was advised to post his cat on www.NextDoor.com and distribute flyers in his neighborhood.  Owners need to check local public animal shelters in case their pet was picked up by an animal control officer or brought in by a finder.

Here are some of the reasons to keep your cat inside, as much as you might think he would enjoy a romp in the outdoor sunshine.

Coyotes are the primary threat to felines in the Coachella Valley.  With the ability to jump over 6 foot fences, coyotes are frequently spotted inside our gated country clubs and other residential communities.  Stray dogs can also kill a cat, particularly if they are running in packs. Predatory birds such as hawks and owls can kill and devour small animals.

Risk of Injury or Disease

Thousands of cats are killed every year from cars.  Other hazards on our landscape such as barb wire fencing, rodent traps, and poisons can cause grave injury or death.  Cats like the sweet taste of anti-freeze, but it is extremely toxic and will result in death within hours.  Some feline diseases are transmitted from other stray cats.  Fleas, ticks and ringworm can be picked up while Felix strolls through the neighborhood.

Fights with other Cats

Cats are territorial animals, and injuries from cat fights can run up some major veterinary bills.  Their territorial battles can result in abscessed wounds which can be deadly if not treated.

Sad to say, there are people in our community who are cruel and sadistic. When your cat wanders, you cannot protect them from the dangers humans intentionally or accidently cause.

Even if they don’t intend to harm your pet, finders may decide to “adopt” and keep your cat.  Tracking them down and proving ownership may be difficult.  If your cat is a sought after breeds such as Siamese or Persians, thieves steal them to resell.  Worse yet, “bunchers” steal and sell cats to laboratories for animal experimentation or research.  Always keep an ID tag with your cell phone number on Kitty, and have him microchipped should you ever have to prove ownership.

We hear incredible tales of cats that travel thousands of miles to return home.  But there are also stories of animals that wander off and are unable to return home for a variety of reasons.  Unneutered Tom cats will wander for miles in search of females in heat.

Your friendly cat could be taken in by someone who thinks he’s an abandoned animal.  They might take him to a public shelter where a majority of the cats are euthanized.

Cats are predators, and it is an instinctual behavior for them to kill and eat birds and other small wildlife.  Your well-fed pet may deposit a dead bird as a present on your doorstep. Bird lovers may become angry when they observe your cat running loose.

Some of your neighbors might not appreciate a cat defecating and roaming on their property.  Gardeners in particular are wary of animals that tromp through their greenery.

Ways to keep Kitty Happy Indoors – Cats are perfectly content to sit in the sunshine on a safe window ledge INSIDE your home.  You can provide exercise with a supply of toys, a carpet covered cat tree, and a cat scratching post.  You can purchase “cat grass” at any supermarket or pet specialty shop.  Get your cat a buddy…there is nothing more joyful than two cats at play.

Here’s the best reason to keep your cat indoors rather than outside.  The average life span of indoor cats is between thirteen and nineteen years, while that of outdoor cats is about five years.  Isis, my wonderful British Blue cat, lived to the ripe old age of twenty-four years, happy to view the world outside from a sunny window ledge.