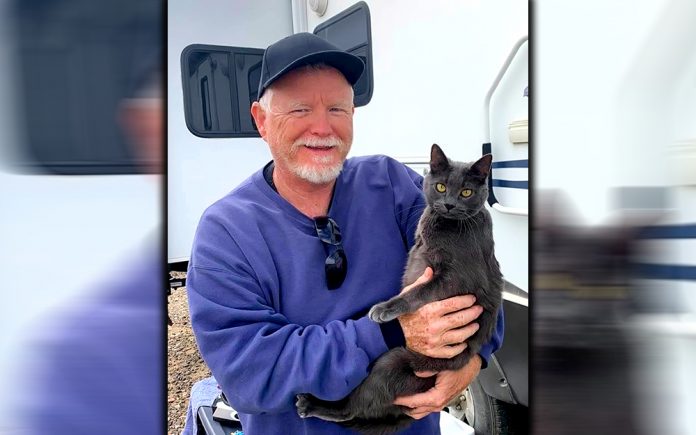 This handsome Russian Blue cat escaped from a recreational vehicle while his owner was camping just outside Quartzsite, Arizona, last month.  Kiko slipped out unseen into the remote desert area near Dome Rock.  A popular RV destination, Quartzsite becomes an RV Mecca in January and February during their annual gem show and giant swap meet.  The area is peppered with hundreds of camping vehicles, and Kiko was in a group of 13 motor homes where 35 friends and family were enjoying their annual January gathering.

The vast desert stretches for miles, eclipsed by hills, with the nearest town miles in the distance.  No one spotted the cat leave, and no one could fathom where he might have gone.  Friends joined Gary in the desperate search for his beloved Kiko. They looked under trucks and cars, checking underneath hoods as cats sometimes hide underneath them.  Some of the searchers ventured out on quads to explore areas further afield.

The night passed with no sign of Kiko.  The next day we obtained a cat trap, setting sardines and tuna inside, hoping the scent would lure the now hungry animal.  The food went untouched, and another day and night passed with no reported sightings.  The situation was becoming grim, particularly since coyotes dwell throughout the Arizona desert.

Then the “hoped for” phone call came!  A camper a mile away spotted a gray cat clinging to a branch up in a small tree.  He was able to grab the friendly feline and secure him while he contacted his owner.  It is possible Kiko sought refuge in the tree escaping from predators.  Gary had wisely fitted Kiko with a collar and engraved ID tag with his phone number.  In any case, it was a miracle that the wayward animal was now safely back home, and in relatively good condition after his ordeal.

Without the engraved ID tag, it is unlikely Kiko would be reunited with his human.  What can you do to prevent a cat from going missing?  What are the things you can to do if your cat is missing?

Microchip your cat and make sure he wears a collar with ID tag containing your phone number.  Only about 2% of stray cats in shelters NOT microchipped are reunited with owners.  The rate of return-to-owner of microchipped cats in shelters jumps to 38%.  Keep your information current with the chip company.  Engraved ID tags from PetSmart get your pet home quickly.

Keep your cat indoors, or build an outdoor enclosed cattery where he can safely enjoy the sunshine.  Allowing your cat to roam outdoors makes him vulnerable to disappearing, predators, theft, and injury or death from passing cars.

Take a good photo of your cat in advance. Make up flyers to post and distribute.  There are boiler plates for flyers at www.bestfriends.org.

Canvass your neighborhood with flyers.  If your pet is friendly, he is likely to be within 10 blocks of your home.  Get friends to help you search.  Give flyers to postal workers, tree trimmers, gardeners, and others who work outside.  Post flyers at Starbucks, vet clinics, animal shelters, and pet grooming salons.

Post your missing cat’s photo on Facebook. www.PawBoost.com and www.NextDoor.com (this goes out to hundreds of folks nearby you).  Most communities have Facebook pages dedicated to reuniting missing pets.  Our local Facebook page is “Lost and Found Pets in the Coachella Valley”.

Check with your local public animal shelter.  They will notify you immediately if your pet is microchipped or tagged.  Check back as animals may show up there at a later date.

The American Humane Society estimates that over 10 million dogs and cats are reported lost every year.  Many are never reunited, and heartbroken folks never know their pet’s fate.  The inability to identify and contact pet owners is a primary reason for this failure.  PUT AN ID TAG WITH YOUR PHONE NUMBER ON YOUR PET AND GET THEM MICROCHIPPED.  May there be more happy endings like Kiko’s!