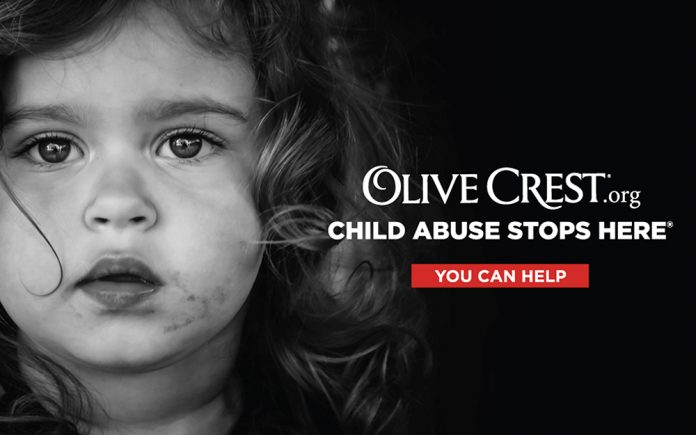 By Madeline Zuckerman Olive Crest, known for its dedication to preventing child abuse, to treating and educating at-risk children and to preserving the family . . . “One Life at a Time,®” hosted its “POWER OF ONE” luncheon with a sold-out crowd of over 200 guests.  This inaugural event, which exceeded all expectations, was Co-chaired by Georgialee and Doug Lang, and held at The Westin Mission Hills Golf Resort & Spa.

The night before the luncheon, featured speaker Kris “Tanto” Paronto, made a special guest appearance at a private Champions’s Dinner held at the Classic Club.  Over 40 youth attended from Olive Crest Programs, including emancipated foster youth and young men from the Olive Crest Perris Group Homes.  This special dinner was generously underwritten by Judy Sumich, who commented “I believe deeply in the work of Olive Crest, and when I was told of this opportunity for this population to hear Kris Paronto speak, I was touched because I feel this age group is often overlooked. Two young men spoke to me after the dinner, and they were so excited about what Kris Paronto had to say.  That was such a blessing to me, and I felt grateful,” Sumich continued.

“I am so grateful to Judy Sumich for underwriting the cost of this dinner, and to Kris Paronto who generously gave of his time to provide this experience for our kids,” stated Angela Allen, Development Manager of Olive Crest Desert Communities.  “We know several of the young people who attended were encouraged and given hope by Kris’ story and inspiring words.  Lives have been changed tonight, and that is all that we could have hoped for,” Allen continued.

“Olive Crest is an amazing organization that does so much for the Coachella Valley . . . unsung heroes, who are in the trenches every day helping save kids and bring families back together,” stated Georgialee Lang, Event Co-chair.  “It is a privilege to be part of the team here in the desert, and seeing lives transformed,” she continued.

Guest Speaker Kris ‘Tanto’ Paronto, the inspiring Hero of the 2012 Benghazi Attack, and subject of the book and motion picture “13 Hours,” spoke of his harrowing experience during the horrific Benghazi Attack to a spellbound audience who was listening to his every word!   Kris Paronto is a former Army Ranger from the 2nd Battallon 75th Ranger Regiment and private security contractor who has deployed throughout South America, Central America, the Middle East, and North Africa.  He also worked with the U.S. Government’s Global Response Staff conducting low-profile security in high-threat environments throughout the world.

Paronto was part of the CIA Annex Security Team that responded to the terrorist attack on the U.S. Special Mission in Benghazi, Libya, on September 11, 2012, helping to save over 20 lives while fighting off terrorists for more than 13 hours.

Kris ‘Tanto’ Paronto is a true American hero who exemplifies patriotism, selflessness, and courage.  Paronto offers a captivating firsthand account of what happened in Benghazi on that historic day and powerful perspective on leadership, harnessing one’s inner strength and the importance of strong teamwork in perilous situations.  His service to his country and sacrifice are an amazing example of the “Power of One.”

“The Power of One” speaks to the difference that any one of us can make in the life of a child or family in crisis,” stated Tracy Fitzsimmons, Executive Director of Olive Crest in the Inland and Desert Communities.  “Each of us can make a difference by getting involved,” she continued.

Since 1973, Olive Crest has transformed the lives of over 130,000 abused, neglected, and at-risk children and their families.  Olive Crest works tirelessly to meet the individual needs of kids in crisis by providing safe homes, counseling, and education for both youth and parents.  Their many innovative programs reflect their strong conviction that strengthening the family is one of the most powerful ways to help heal children.  With unwavering compassion, the Olive Crest family maintains a lifelong commitment to the youth and families it serves, even after they have graduated from their programs.

Established, Proven, and Respected, Olive Crest serves over 3,500 children and families each day throughout California, Nevada, and the pacific Northwest.