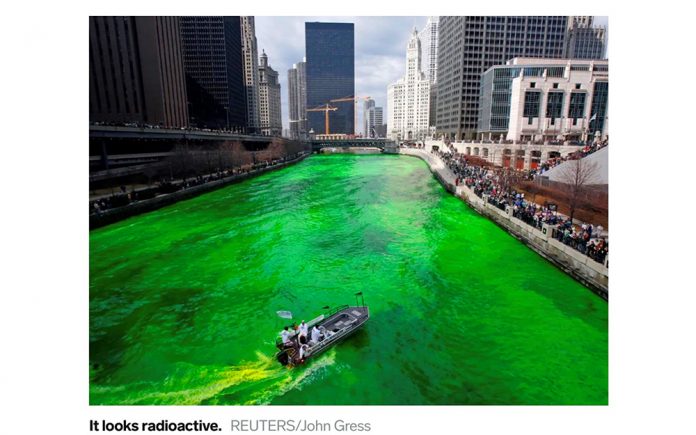 For most beer industry folk, this St. Patrick’s Day will mark the first anniversary of the realization that COVID was going to be a serious affair. The 2020 shamrocks had been hung, corned beef & cabbage simmered peacefully in the kitchen, and all that remained was the arrival of everyday, ordinary people who would make it rain dollar bills in exchange for the privilege of acting Irish for a few hours. 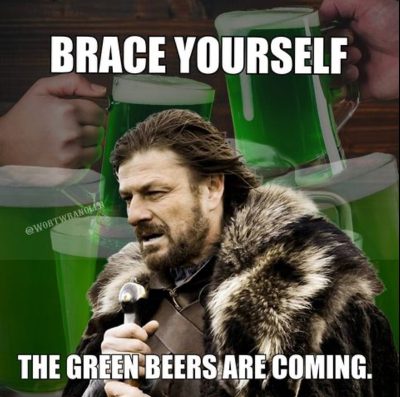 For many restaurants and bars in 2020, the third largest American drinking holiday (according to alcohol.org) fell flatter than Irish soda bread. As it turns out, this proved to be little more than a mere precursor to a disastrous year thanks to the global pandemic. This year’s edition will be a scaled back version of St. Paddy’s (Never St. Patty’s, by the way), but should assist in ushering in a little sense of normalcy to a sector of the public desperate for some sense of normalcy.

The digital mailbag contained an apropos St. Patrick’s Day question this week; Marcus from Cathedral City eMailed, “Mr. Whisperer, how do you feel about drinking green beer on St. Patrick’s Day? I personally enjoy it because it’s fun, but several of my friends are into craft beer and they make fun of the rest of us, saying green beer is an abomination. Which of us is right?”

Marcus, I’m going to delve a little deeper into the history and rituals of the day in which we honor Ireland’s favorite Patron Saint before giving you and our dear readers a definitive answer. Read on young man as we examine the saga of how we ended up here…with green beer in our glass, corned beef on our plate, and Oh Danny Boy emanating from the digital juke box.

To begin, let’s accept that what has become St. Patrick’s Day here in the US has little to do with the true Irish celebration. Did you know that the United States is currently home to over seven times as many Irish Americans than the actual population of the motherland? As a result, it stands to reason that American influence over this holiday reigns supreme.

The very first St. Patrick’s Day Parade was held in Boston in 1737; almost forty years before the signing of the Declaration of Independence. Mind you, the parade consisted of disgruntled British soldiers of Irish descent, but it still stands as the very first edition. New York would follow suit 25 years later with their very own version in March of 1762. What about Ireland, you ask? Heh…not until 1903; thoroughly illustrating the shaping of the celebration by Americans.

Going out on St. Patrick’s Day to a bar or restaurant? Green beer is seemingly ubiquitous with the revelry, right? There are two points of contention as to the actual origin of coloring beer emerald, so I’ll let you choose a version to support. First, in 1910, the Spokane (WA) Press proudly proclaimed, “Green Beer Be Jabbers!” (be jabbers’ being an excited swear). Unfortunately, little more than the headline exists today, leaving much speculation as to how or where the green beer appeared. The only description is the following run-on sentence; “It is a regular beer, apparently it has not been colored locally, it tastes like beer and looks like paint, or rather like the deep green waves in mid-ocean with the sun striking them through.” [Sounds as appealing as today’s milkshake stouts if you ask me]

Most folk give the green beer credit (or disgust) to Prof. Thomas Haynes Curtin, a Coroner Physician and Eye Surgeon in New York City. Thomas was the Toastmaster at the Schnerer Club of Morrisania in the Bronx and unveiled his green beer during their St. Patrick’s Dinner in 1914. All the doctor would tell inquisitive guests was that the effect was brought about by one drop of wash blue in a certain quantity of the beer.

My first question? What the heck is ‘wash blue’? The Smithsonian comes to the rescue here, explaining that when the practice first began, bar owners got the celebratory bright green hues in their brew by adding something a little less palatable than simple food coloring, and slightly more poisonous: an iron-based powder solution embedded with a dye which was used to make dingy whites bright again on laundry day. Hmmm…a bright idea, indeed!

Your KegWhisperer has a theory on this subject as well. Brewers refer to beer that has not fully conditioned as ‘green beer’, a la green fruit. During the huge St. Patrick’s celebrations in cities such as Boston, New York, and Chicago, huge amounts of beer were consumed in a very, very short period of time. Artificial refrigeration had yet to be invented, so it was virtually impossible to produce enough suds for such a celebration and prevent it from spoiling in the warmth of Spring. As a result, when the taps ran dry of regular beer, ‘green beer’ was brought forth in an attempt to continue to slake the thirsts of hearty revelers. As a matter of fact, Schlitz even had an advertising campaign which addressed this very issue. 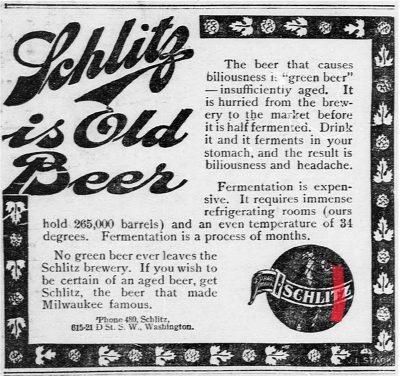 It’s also time to call shenanigans the standard fare and cornerstone of most St. Patrick’s Day celebrations…Corned Beef & Cabbage. This meal, seemingly synonymous with the fatherland, is a foreign concept to the native Irish who made ends meet with inexpensive pork and potatoes. During the period between 1820 and 1860, the Irish comprised over one third of all immigrants to the United States, thanks in great part to the potato blight. They lived in large cities along with other immigrants and frequented Jewish delis and lunch carts, and it was there that they first tasted corned beef. Certainly, potatoes were available, but cabbage proved to be much more cost effective for families struggling to survive on a budget tighter than spandex on a weightlifter. Bottom line: Corned Beer & Cabbage is about as Irish as spaghetti & meatballs and I’m opting for Shepard’s Pie with a hearty side of Colcannon (you really want to Google colcannon).

So, here we are. Due to time and space constraints, I’m unable to get to how the Chicago River gets its dye job every year, Craft Brewers making naturally green beer (Dogfish Head – Verdi Verdi Good), and exactly how Guinness manages to sell over 13 million pints of their inky-black stout.

Before signing off, we must not forget about Marcus in Cathedral City and his green beer dilemma. I have some great news my newfound friend. In this current climate of diversity and acceptance, anyone who chooses beer, green or not, is a winner in my eyes and everyone has their own idea of how to observe St. Patrick’s Day. I sincerely hope that Marcus, his friends, and all of our CV readers have a fun-filled St. Paddy’s Day. Pace yourselves, don’t forget to hydrate, and stay safe! Please don’t drink and drive and strive to be good humans.

(When Ed Heethuis isn’t brewing at Spotlight 29 Casino for 29 Brews, you will find the Certified Cicerone / Brewmaster out on his road bike, participating in an Extreme Ironing competition, or talking beer with the patrons at Taproom 29. He may be reached at: heethuis.ed@gmail.com or wherever beer may be found in the wild.)