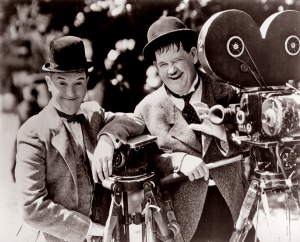 All over the world, every second of every day around the clock, someone is laughing out loud at a Laurel & Hardy comedy. A living stream of laughter emanating into the cosmic void is not a bad legacy from two exceptional members of our erratic species that sometimes seems hell-bent on destroying our planet and ourselves.

Perhaps it is that crazy, self-destructive nature, the constant fighting, quibbling, misunderstandings, grandiose plans gone wrong and the epic, deranged, escalating acts of getting even that makes the films of Stan Laurel and Oliver Hardy so universally relatable. Clearly, we see ourselves. But what makes The Boys themselves so popular is that underneath it all, there’s genuine love. No matter how horrible the mess they create, or who is truly at fault, they are always back together again with high hopes for whatever new adventure lies ahead. We intuitively understand they love each other even though they never hugged on screen or spoke of their mutual high regard; it was always crystal clear they were best friends. No matter what. 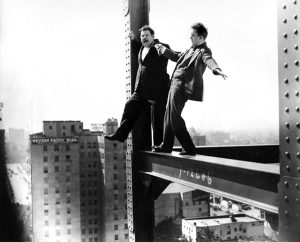 The purest pleasure of their best films is that amidst all the anarchic antics, there’s that unexpected feeling of affection that leaks off the screen into our hearts and souls. Stan and Ollie are icons of the best and worst of our human traits. Childlike and innocent, they give us permission — no, they force us — to laugh at the unfair vicissitudes of life; yet, at the same time, give us hope that somehow, someday, all will finally be OK in spite of their endless on screen attempts at revenge — or never understanding there’s no such thing as “getting even.”

The mystery of why we laugh or even what makes something funny is illusive. Even Stan Laurel said, “I only know how to make people laugh, not why.” There are reports that when Stan and his wife (he had five) went to a club, he was sometimes asked to stand and take a bow or say something. Stan would step into the spotlight, slowly blink in otherworldly bewilderment, literally saying and doing nothing. Soon, the place was roaring with laughter. Stan Laurel understood that the dead center, the sweet spot, the bull’s eye of comedy was a Zen stillness that says: Here I am, I didn’t ask to be here and I have no idea what it all means. It’s our most fundamental philosophical dilemma. That’s why there’s nothing left but to release a cosmic laugh in the face of God. Stan Laurel was a genius that ranks with Bach, Michelangelo, Tesla, Einstein, Twain and Hawking. He was the genius behind the duo. He tapped directly into our collective DNA that recognizes the inexplicably absurd inexactitudes yet oddly mystical paradoxes of life itself. 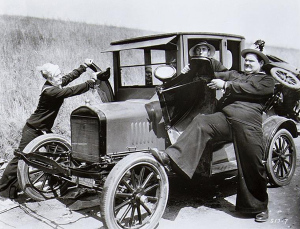 According to Jerry Lewis, who knew and idolized Stan Laurel, it was Stan who discovered Ollie. One day on the Hal Roach lot, Stan, fresh from the UK and a US vaudeville tour, he spotted a large man carrying a pipe with red flags on both ends. Stan said to Lewis he immediately wanted to do something to upset the worker carrying the pipe and asked to meet him. Stan invited Ollie to step in front of the camera. Ollie said, “Anything would be better than what I’m doing, but I don’t know anything about filmmaking, acting or comedy.” Stan said, “That’s perfect.” Soon, Roach paired them on screen and there was magic. Ollie’s bewilderment of — and love for — Stan was genuine and the audience recognized it.

Vivendi/RHI offers a 10-disc core set that contains 57 of the 99 films L&H made. The restored sound films, shorts and features come in a compact book-style case with sturdy card stock sleeves.

Highlights: 1932’s THE MUSIC BOX won an Oscar as Best Short Subject; PARDON US and CHUMP AT OXFORD are the rarely seen extended versions publicly previewed during the editing process; THE PERFECT DAY includes an optional Vitaphone disc track without incidental music and a faintly heard heard expletive; POLITIQUERAS is the 56 minute Spanish version of CHICKENS COME HOME and features Hadjii Ali’s truly astounding vaudeville act that must be seen to be believed; the TRIBUTE TO LAUREL AND HARDY, a too short 40 minute featurette on Disc 10, reveals the friendship, inspiration and love for Stan and Ollie in new interviews with Jerry Lewis, Dick Van Dyke among others. 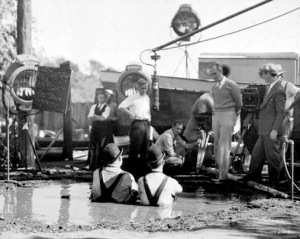 Some of the films seem to be a continuation of the same story. For instance TIT FOR TAT flows naturally into THEM THAR HILLS. And HOG WILD can be seen as a prequel to COUNTY HOSPITAL. There are more titles that work in the same way with wonderful results when paired back-to-back.

Missing from the collection is the truly disturbing and demented BABES IN TOYLAND AKA MARCH OF THE WOODEN SOLDIERS (available from Legend in a superbly colorized, pristine transfer the way Stan Laurel wished it had been filmed).

So much more can be said about these wonderful films – and has, in Randy Skretvedt’s well-researched “LAUREL AND HARDY: The magic Behind the Movies.”

Laughter is indeed the best medicine for our very human condition. Stan Laurel and Oliver Hardy understood this. This is a set for the digital library.